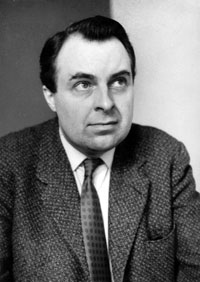 Last night, or early this morning, just after midnight, Monsters HD started running its annual HALLOWEEN Marathon. I ended up watching a bit of HALLOWEEN III: SEASON OF THE WITCH (1982), a film originally scripted by Nigel Kneale; I was curious to see how well it held up. After the commercial and creative disappointment of HALLOWEEN 2, series producers John Carpenter and Debra Hill decided to terminate Michael Myers by converting their popular franchise into an anthology about the eponymous season itself, one that would exploit and celebrate Halloween in different ways each year. Carpenter -- an avowed admirer of Kneale's "Quatermass" films for Hammer -- had approached Kneale to conceive the first chapter in this new direction. Kneale turned in what was, by all accounts, his customary thoughtful, thought-provoking job but, as was for some reason well-publicized before the film was even released, Carpenter infamously rejected the script. ("It was old-fashioned," he told me in a 1981 interview, when his disappointment was still fresh.) Nevertheless, some of Kneale's ideas are plain to see in the lopsided but occasionally interesting work that resulted. And, as irony would have it, these are the only elements in the disco-tempoed, bed-wrestling, gore-driven film that haven't dated.

Mr. Carpenter's opinion to the contrary, Kneale's work remains rare in my experience of, shall we say, speculative screenwriting in that it has never become old-fashioned. Even when his stories date from another era -- such as the time in the mid-1950s when we stood on the threshold of space travel, trepidatious yet determined to pierce the sky -- they hum with urgency, an urgency of to extend our knowledge, not only of space but of ourselves. People remember the 1960s as an era of mind expansion, but the best science fiction of that period (indeed, of any period) is much more in the nature of mind extension. No one knew better that minds respond better to being sharpened than being blown than Nigel Kneale, and he was just the gunslinger to do it.

How strange then, after sleeping on these ruminations, that I should come online today to discover, in an e-mail from Kim Newman, that Nigel "Tom" Kneale died last Sunday, October 29th, at the age of 84. To resort to an overused but fitting phrase, it feels like the end of an era -- one of those events that bookmark a chapter's end in one's own life.

As a boy who spent his weekends at the movies and his weekdays in front of a television showing movies, I came to understand the importance of the director by the placement of his name at the end of the main titles. The director's name was the one left to resonate in your thoughts during the dissolve that would brighten into the telling of the story. On the other hand, I never gave much thought to the screenwriter's job, other than to wonder where all of these horror movie stories (as in "Story by so-and-so" as a distinct credit) had been published; I later realized that they were mostly written expressly for the screen, sometimes on the back of an envelope or bar napkin. As an habitué of horror, science fiction and fantasy films, I didn't begin to appreciate the craft of the screenwriter until I caught up with Nigel Kneale. He was one of the earliest writers whose name I sought out in newspaper movie ads, and thus more than just a writer to me. He was one of my childhood heroes, along with the first generation of NASA astronauts and Dr. Christiaan Barnard, the surgeon who performed the world's first successful heart transplant. Note that I bracketed him not with fellow artists but with scientists whose visionary adventurism changed the very definition of our species and what we could consider possible; that is how highly I thought of him and the intelligence he brought to bear on the movies he signed.

Such a legacy! He wrote the famous BBC teleplay of George Orwell's NINETEEN EIGHTY FOUR (1954) starring Peter Cushing, and his affiliation with Hammer Films was to predate even that of Cushing. His byline appeared on such feature films as THE QUATERMASS XPERIMENT aka THE CREEPING UNKNOWN (1955, based on his teleplay "The Quatermass Experiment"), QUATERMASS 2 aka ENEMY FROM SPACE (1957), THE ABOMINABLE SNOWMAN OF THE HIMALAYAS (1957), THE ENTERTAINER (1960, one of Laurence Olivier's finest screen portrayals), THE FIRST MEN "IN" THE MOON (1964, one of the few Ray Harryhausen films to engage us as something more than an excuse for stop-motion magic), THE WITCHES (1966, not a favorite Hammer of my childhood but one that interests me more today), the magnificent QUATERMASS AND THE PIT aka FIVE MILLION MILES TO EARTH (1968, based on his 1959 teleplay), and of course those brilliant and often prophetic other teleplays written for British television, many of which are now available on import DVD: THE YEAR OF THE SEX OLYMPICS (1968), THE STONE TAPE (1972), BEASTS (1976), THE QUATERMASS CONCLUSION aka QUATERMASS (1979), and that marvelous goosebumper THE WOMAN IN BLACK (1989). THE QUATERMASS EXPERIMENT was revived in 2005 as a live BBC broadcast starring Jason Flemyng, but without Kneale's input; it was not a success.

The presence of Kneale's name on a project was always indicative of quality, indeed of a quality and character that could overcome even the most indifferent direction on the sheer power of its language and ideas. Thus, Kneale is one of the very few screenwriters who earn our full consideration as an auteur. Of course, he is the author of the work, but in the Andrew Sarris sense of the word, he is the work's principal creator -- which was perhaps the real problem that John Carpenter (who insists upon his own name above the title) couldn't overcome with his Kneale screenplay.

Kneale's TOMATO CAIN AND OTHER STORIES (1949) predated his work in television and points to a promising literary career sidetracked by television -- but, as I'm sure he would say, in the words of his Professor Bernard Quatermass, "I never had a career, only work." Thirty years later, he complemented his miniseries teleplays of the 1979 finale to his "Quatermass" saga with a novel version, titled simply QUATERMASS -- one of the most effectively written, elegiac and moving science fiction novels I've read. Largely on the strength of this novel, and of course the "Quatermass" series of stories as a whole, I've always regarded him as one of Britain's greatest literary visionaries, on par with H.G. Welles and J.G. Ballard.

Science fiction mourns Nigel Kneale because he was one of the genre's most illuminating humanists -- not a sentimentalist like Bradbury, or a myth-maker like Frank Herbert, but a confrontational writer in the tradition of Orwell and Huxley, who used the genre as a framework within which to identify and grapple with the nature of the problematic times in which we find ourselves. He often painted cynical landscapes of our future, and found fault with us as a species for our pendulum swings, the way we seem to follow every notable advancement with cowardly retreats into arch-conservatism. He was also a masterful Swiftian satirist whose tweaks at humankind's expense proved just as prophetic as his works undertaken in a more somber mood. He predicted our dire fascination with "reality television" in 1968's THE YEAR OF THE SEX OLYMPICS; the cosmic "ball of twine" narrative of QUATERMASS AND THE PIT, which puts forth a frightening (and, as more recent discoveries have suggested, quite possibly accurate) theory about the origin of our species, was a startling forebear of stories like THE DA VINCI CODE; and even his HALLOWEEN III script, as I noticed last night or this morning, is every bit as critical and satirical of the television medium as David Cronenberg's contemporaneous VIDEODROME.

There is no replacing a talent of this magnitude. We can only thank Nigel Kneale for the many inexhaustible gifts he left behind -- on film, on videotape, and on paper.
Posted by Tim Lucas at Tuesday, October 31, 2006