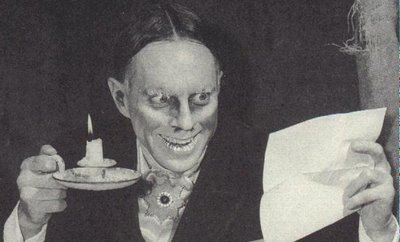 Halloween has come again
And to make tomorrow scary
Seems the time is right for me to pen
A DVD itinerary.

Here's a frightful five chosen for you
By your WatchBlog kemosabe
They range in sheer shock value
From mild to "POW!" wasabi...

THE ZACHERLEY ARCHIVES
The haunted holiday has no wittier Master of Cemeteries than New Jersey-based John Zacherle (pictured above), who hosted Philadelphia's SHOCK THEATER as "Roland" and New York City's ZACHERLEY AT LARGE as "Zacherley" from the late '50s through the early '60s. All the surviving kinescopes from his broadcasting heyday are collected on this excellent DVD, along with extensive supplements. The vintage material proves beyond question that Zacherle wasn't just one of the first TV horror hosts but, like his colleague Vampira, an offbeat genius of the Beat Generation. He has also recorded several horror-themed musical comedy albums which, for my money, demonstrate a level of artistry in terms of songwriting and performance that are every bit the equal of Ghoul Porter. Still spry in his 80s, Zacherle was a guest at last weekend's Chiller Theater convention, promoting a new book about him, written by Rich Scriviani -- about which you can read more here. I apologize for the short notice, but even if you can't score a copy of this disc in time for Halloween, you should order it anyway. You owe it to yourself to know as much as you can learn about this true American original.

MONSTER KID HOME MOVIES
Joe Busam's Rondo Award-winning compilation of 30 different monster-themed home movies, dating from 1952 to just a few years ago, makes for magical viewing at any time of year, but it acquires additional lustre at Halloween time. Every single film features an audio commentary. Tom Abrams and I contributed an audio commentary to Alan Upchurch's NIGHT STALKER-inspired epic "The Gentle Old Madman," and the disc also runs the gamut from Bob Burns' 16mm short THE ALIEN to Kerry Gammill's FRANKENSTEIN MEETS THE WOLFMAN remake to stop-motion dinosaur animation by Frank Dietz. A must-have disc regardless of season, you can order MKHM from Amazon.com or directly from the www.monsterkidhomemovies.com website. If you feel like still more in the same vein, another Monster Kid auteur -- Don Glut (pronounced "Gloot") -- has also released a two-disc set of all 41 of his own B (as in Boyhood) Movies, I WAS A TEENAGE MOVIEMAKER, but I can't tell you anything about it because I wasn't sent a review copy.

HOUSE ON HAUNTED HILL
As far as feature films go, this is the one that SCREAMS "Halloween" loudest to me. This William Castle classic posits Vincent Price as the millionaire host of an evening spent among a group of strangers locked inside a haunted Frank Lloyd Wright mansion where murder was once committed; he offers $10,000 to anyone who can survive the evening. Will anyone live to collect? Watch out for the human heads without bodies and the pools of blood that drip from the ceiling! Leona Anderson, the sour songstress responsible for the great MUSIC TO SUFFER BY album (with its great song "Rats In My Room"), has a memorable, hair-raising bit as the house's blind housekeeper. This movie is apparently now in the public domain and thus available from many different labels, but we haven't seen better than the Warner Home Video release, which offers the film in a choice of standard ratio (open aperture) or anamorphically enhanced widescreen (a beautifully composed matted image). Need something a little lighter? How about...

THE GHOST AND MR. CHICKEN
The definitive Don Knotts comedy casts the quaky comedian as yet another character who must spend the night in a haunted house -- namely Luther Heggs, a typesetter who dreams of having his byline on page 1 and accepts the challenge of bunking down in The Old Simmons Place on the 25th anniversary of the slaying that made it infamous. Rarely has small town America been so sweetly and cleverly lampooned (reportedly no less than Andy Griffith gave the script an uncredited polish), but the spooky parts work too. The score by Vic Mizzy (THE ADDAMS FAMILY, GREEN ACRES) is a big part of its atmosphere and charm, as is the stellar supporting cast: Hal "Otis" Smith, Charles Lane, Robert Cornthwaite, Liam Redmond, Reta Shaw, Skip Homeier, and lovely former Playmate Joan Staley as Luther's main squeeze, Alma. The artfulness and hilariousness of it will never actually be forgotten, not even if you use Bon-Ami on your gray matter. Evidently this movie is now available only as part of a box set with three other Knotts features, but the pricing is like getting the other three movies free. Oh, you want something stronger? A lot stronger? Well, then you can't go wrong with...

SUSPIRIA
This acid-strength immersion in wicked witchiness remains Dario Argento's most effective demonstration reel after thirty years. Jessica Harper (PHANTOM OF THE PARADISE) stars as an American ballet student who travels to Germany to study at an exclusive dance academy that turns out to headquarter a coven of witches. Alida Valli as the headmistress gloats more incandescently than a lit Jack O' Lantern, but creepier still is the sinisterly silhouetted Mater Suspiriorum, the wheezing crownhead who, with her two sisters, controls all the evil in the world. Not a lot of plot here, but the style (largely inspired by Disney's SNOW WHITE AND THE 7 DWARFS) is syrup-thick and the violence is, well, thick with syrup. The first murder offers a serious challenge to the shower murder in PSYCHO in the dazzling department, and -- thanks to the DD-5.1 capability of DVD -- the thundrous Goblin sountrack can be enjoyed in something very near its original theatrical presentation. A cameo by Udo Kier is the cherry on top of a very black sundae. If you missed the three-disc limited edition of a few years ago, shame, shame... but you can still get it as a single-disc offering.

And I'll add a postscript to the effect that Tartan Asia Extreme's MAREBITO remains the scariest and most original horror movie I've seen all year. If you've "been there, done that" with all my other suggestions, go straight to MAREBITO. I dare you.

Here's wishing you all a very happy and safe Halloween! Find a good, scary movie and try to go easy on the candy. (DVDs and Peanut M&M's... my only weaknesses! Well, they're the only ones I'm telling YOU about.)
Posted by Tim Lucas at Monday, October 30, 2006