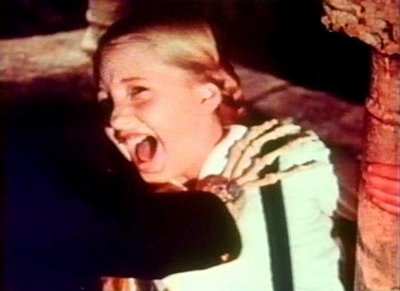 A nightmare vision from the Spanish-made Boris Karloff film,
CAULDRON OF BLOOD.

This curious Spanish-American co-production starring Boris Karloff was filmed in 1967, contemporaneously with his I SPY episode "Mainly On the Plains," but not released anywhere in the world until February 1970, a full year after the actor's death. At this time, it was one of several films falsely advertised as showcasing his final performance. Uncommonly in the context of a horror film, Karloff is not top-billed; though his bearded and begoggled visage looms large in the psychedelic opening credits (with the film's title spelled out in animated bones, à la ABBOTT & COSTELLO MEET FRANKENSTEIN), that distinction falls to dashing Jean-Pierre Aumont, who stars as photojournalist Claude Marchand.

Assigned by HOLIDAY Magazine to travel to Torremolinos and charm his way past the barred doors of reclusive artist Charles Badalescu (Karloff), Marchand achieves his goal with the help of Valerie (Rosenda Montéros), an attractive local artist on friendly terms with Badalescu's protective wife and former model Tania (Viveca Lindfors). Badalescu, blinded and crippled in an automobile accident years earlier, is working on a series of commissions involving the sculptural recreations of the figures in various classic paintings. He achieves this -- in a manner requiring only slightly more ability than fellow sculptor Walter Paisley (in Roger Corman's A BUCKET OF BLOOD, 1959) -- by using actual human and animal skeletons acquired by Tania as armatures. What Badalescu doesn't know is that Tania isn't robbing graves but working with a handsome cohort (Milo Quesada, the murderous Frank in BLACK SABBATH's "The Telephone") to "arrange" the deaths of various turistas who have the misfortune to resemble figures in the paintings being recreated in three dimensions; she then dips them in a basement acid bath to provide the artist with his raw materials. Prominent among the supporting cast are Dianik Zurakowska -- one of the female figureheads of Seventies Spanish horror, whose short screen career encompassed THE SWEET SOUND OF DEATH (1965), FRANKENSTEIN'S BLOODY TERROR (1968), THE VAMPIRE'S NIGHT ORGY (1973) and SEXY CAT (1973) -- and Manuel de Blas, who subsequently played an interesting Count Dracula in the many-titled ASSIGNMENT TERROR aka DRACULA VS. FRANKENSTEIN (1969). 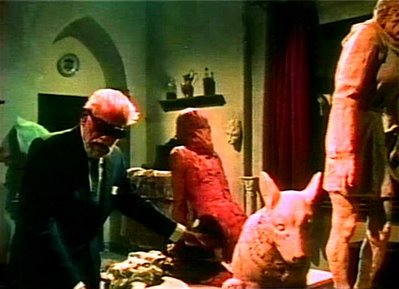 At the time of its initial release, CAULDRON OF BLOOD was generally dismissed by horror fans; Karloff's role wasn't prominent enough, his expressive eyes were covered throughout (either by heavy black goggles or a grotesque makeup showing his eyes welded closed), and the modernist style of the film was jarring, its jazzy score (credited to Ray Ellis, though it sounds very much like a Spanish film score of its era) and its garish lighting not in keeping with the traditional qualities found in Karloff's best pictures. Revisited today, with more familiarity with Spanish horror cinema and its own traditions under our belt, it's easier to appreciate for what it is -- not a good film by any means, but more interesting than previously thought.

The English version is self-described as "A Film By Edward Mann," but this provenance is troublesome as Mann (who previously scripted ISLAND OF TERROR) was known to make arrangements with friends and acquaintences to add his name to scripts he had nothing to do with, as in the case of Oliver Stone's SEIZURE. The screenplay is credited to John Melson and Edward Mann, while Spanish references credit José Luís Bayonas. It's possible that Mann wrote some English dialogue for the film, but he at most co-directed it with Santos Alcocer (THE ORGIES OF DR. ORLOFF), whose role is obscured in the otherwise English credits with the job description "realizador." There is no director credit, per se. 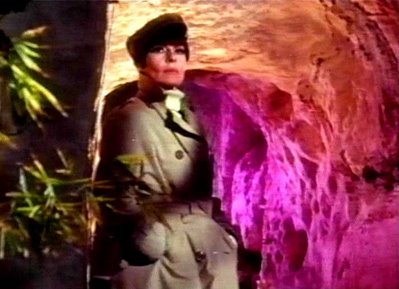 Viveca Lindfors as Tania -- wife, caregiver, sado-masochist, and worse -- in a shot displaying the film's inventive color lighting.
Aumont (the father of Tina Aumont) looks throughout like an actor who knows he is slumming, but he fires off some crude lines early in the picture that are amusingly at odds with his debonair persona. (Looking around while checking into an empty hotel, he sighs, "Boy! The zhoint is zhumping!" And when he's assured that the hotel bar is much cleaner than the other bar in town, he responds that he's glad because he wouldn't want to be taking home "any portable pets.") Karloff, who dubs his own performance, gives a fine workmanlike portrayal of the sort he gave earlier in the year in THE VENETIAN AFFAIR; if he's not particularly memorable, it's because the role has been given illusory substance by being cast with a better actor than it required. The film truly belongs to Viveca Lindfors, who -- in her late 40s at the time of filming -- gives a sexy performance as Karloff's imperiously chic, implicitly bisexual caregiver, who wears a chauffeur's uniform, leather pants, and whip regalia to a masquerade party and suffers nightmares of being mercilessly flogged as a child, dreams which also contain an eerie presentiment of her eventual fate. This nightmare sequence also features crude special effects of Karloff's head melting; these, attributed to the company Thierry Pathé, are very much like those seen in MALENKA and the Blind Dead films and suggest the uncredited involvement of Amando de Ossorio. Fans of Spanish film locations may recognize Karloff's Byzantine abode from its appearances in other pictures, notably Jess Franco's DORIANA GRAY (1976).

NTA/Republic Home Video's long-out-of-print videocassette naturally presents the film dubbed into English, but the job is incompletely done, with one scene of Spanish actors talking to one another in their native language subtitled in English (the words are not only horizontally cropped in this pan&scan transfer, but may also be vertically so, depending on your monitor's calibration). Also, scenes involving Aumont, Quesada and a young Spanish actor find the boy speaking in untranslated Spanish in response to their English dialogue; amusingly, they all seem to understand each other. As with many Republic tapes dating back to their earlier NTA incarnation, the film is presented in what appears to be its TV version; there is a brief through-the-suds glimpse of Zurokowska's nipple in a bubble bath scene, but more prolonged views of her nude body are splicily excised from a later sequence. (Nudity would also have been forbidden in any Spanish film of this vintage.) Some sources list this film as having been photographed in a scope ratio, but it was actually shot in a "Panoramico" (1.85:1) ratio, and cropped here to standard framing, with only a couple of instances of lateral scanning. The color quality of the tape looks surprisingly fresh and undated.

CAULDRON OF BLOOD is also available here as a low-frills UK import Region 2 DVD from Orbit Media. This release is also said to feature a cropped standard ratio presentation, and Kim Newman informs me that it is also lacking the nudity absent from the NTA/Republic tape. It also includes an episode of Karloff's COLONEL MARCH OF SCOTLAND YARD series ("The Silver Curtain," featuring Anton Diffring) and bonus trailers as incentive. One of the trailers, appropriately, is for the aforementioned A BUCKET OF BLOOD.
Posted by Tim Lucas at Saturday, January 06, 2007