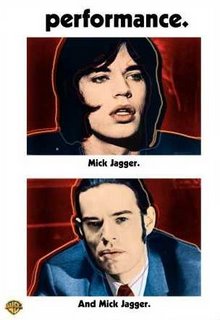 Warner Home Video's forthcoming DVD of PERFORMANCE is the most beautiful, comprehensive, and comprehensible presentation of the film I've ever seen... but.

Truly, the quality of image and sound is a revelation, and the disc provides a most welcome subtitling option (like the audio, in English only) that clarifies all that the ear cannot easily interpret. The subtitles aren't always perfect, though: when Chas (James Fox) calls his nephew "good boy" on the telephone, the subtitle reads "goodbye," even though they continue talking; there are other faux pas as well, yet somehow "Orbis Tertius" is spelled correctly. Unfortunately, as often happens with DVD subtitles, the song lyrics are not transcribed; they may, however, be present in the closed captioning.

The audio is given a particular boon by the clear digital separation of the dialogue and music/effects tracks, which allow the music in the film to stand out and sparkle (I'm now much more aware of music cues in the film that were not included on the album), and the dialogue to be heard separately from the sounds that have heretofore bled into it, making it more easily understood even without the subtitles. Never before have I followed the details of the plot so well. Never before did I catch the reference to "Mick" before Chas shoots the man who beat him in his apartment, the one time Chas calls Turner "Nick," or Pherber's suggestion that they call "Dr. Burroughs." (Isn't he "the man who works the Soft Machine"?)

The tragic "but" to which I referred in my opener is a very irritating and needless one. During the "Memo from Turner" sequence, when Turner (Mick Jagger) raises a glass in a toast and cries "Here's to Old England!" (reprising an earlier line of Harry Flowers, played by Johnny Shannon), his lips move... but... no sound comes out! Other dialogue heard during the song is intact, so why not this? Boo, hiss.

This mistake aside, I had the feeling while watching this disc that it might be the first time I have ever seen PERFORMANCE at the correct projection speed. Everything about the picture seemed a semi-tone lower in register, more comprehensively paced. As I noted yesterday, there's a difference in running time over the previous Warner PAL VHS and NTSC laserdisc releases that amounts to an additional 6 seconds. At present, I can't be sure of where all those seconds occur, but the main titles seemed more revealing than I remembered them, so I took the time to write out a cutting continuity of the title sequence, as it appears on the new disc, and compared it to the shots that open the British tape. I found two brief shots omitted from that earlier continuity; there is an additional shot of Ann Sidney naked between the legs of James Fox and a followup cutaway to the Rolls-Royce, placed immediately prior to a similar shot that shows Fox rocking Sidney from side to side between his legs -- to be blunt, the shot of her giving him head prior to the shot of his orgasm. (The Rolls was removed only to maintain the editing rhythm established by the sequence, so that one Rolls shot wouldn't directly cut to another -- thus tipping the audience off that something had been removed.) Also, one of the shots included in the earlier continuity, also between Fox and Sidney, goes on some frames longer here, permitting a brief glimpse of Sidney's pubic hair. Also, this sex scene was darkened considerably in all earlier presentations, but is brighter here, permitting more obvious glimpses of full frontal and rear nudity, by Fox as well as Sidney. Likewise, later in the film, when Pherber (Anita Pallenberg) is filming Turner as he sleeps nude and covers his genetalia with his hands, a single frame is intact showing Jagger's testicles.

The featurettes are very good. The longer one is about a good deal more than just the film's censor problems; in fact, it hardly touches on them. It's more of an overview of the film's development and production, and an appreciation of its current status. The interviewees include star Anita Pallenberg, producer Sanford Lieberman, associate producer David Cammell, Jack Nietsche Jr. (son of the film's late music supervisor), and author Colin McCabe. The "Memo from Turner" piece does attend to the behind-the-scenes of filming that sequence, and features some neat footage of Cammell directing Jagger, as well as shots not in the final assembly. The trailer is in mint condition.

How the producers of this disc could have been sharp enough to track down millimeters of never-before-seen footage to include in this gorgeous assembly, making it the most complete and brilliant-looking version of PERFORMANCE ever, yet so careless as to mute an important (at least resonant) line of dialogue, I can't explain. I hate to rain on this release over something so minor, especially when it accomplishes so much else, but the error is minor only in length; anyone who already knows this movie is going to miss that line, and wince in pain when they discover it for themselves.

I'd still recommend this disc very highly. If you haven't seen PERFORMANCE, you must; if you're already among the converted, you know you'll have to get this -- just resign yourself to the fact that this won't be the last time we line up to buy this title.