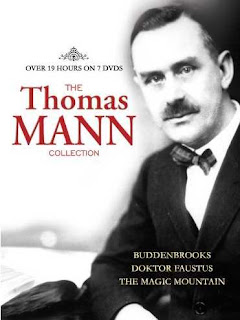 Back in 1981 or '82, when I was a regular consumer of VARIETY, I can remember being taken pleasantly aback by a pair of full page ads announcing the completion of a couple of German film productions based on two classic novels by Thomas Mann: THE MAGIC MOUNTAIN and DOCTOR FAUSTUS.

This was around the time I was just dipping my toe into home video and still very much a dedicated reader. Somewhat earlier in my life, in the mid- to late-1970s as I was chain-reading my way through my literary education, I read a great deal of Mann and loved it -- those two books particularly, though I also found myself deliriously overwhelmed by the scope and style of his most colossal work of the imagination, his JOSEPH AND HIS BROTHERS tetralogy. I was thrilled to know that both novels had finally been adapted for the screen and couldn't wait to see them. What I did not know is that it would take another 28 years for that to happen.

Only now have the film versions of THE MAGIC MOUNTAIN [Der Zauberberg, 1982] and DOCTOR FAUSTUS [Doktor Faustus, 1982] become available for viewing with English subtitles, in a DVD box set from Koch Vision called THE THOMAS MANN COLLECTION -- along with an epic miniseries production of Mann's BUDDENBROOKS previously televised here as part of PBS' GREAT PERFORMANCES. The seven-disc set runs longer than 19 hours, making its hefty cost seem more reasonable.

I'm posting this information in a state of excitement; I haven't as yet seen the films themselves, though I plan to dig in soon. But what I can tell you is appetizing. THE MAGIC MOUNTAIN stars Rod Steiger, Marie-France Pisier and Kurt Raab, and was scripted and directed by Hans W. Geissendörfer, best known for his political vampire film of 1970, JONATHAN. DOCTOR FAUSTUS stars Jon Finch (great casting, I'm guessing) and Marie-Hélène Breillat and was written and directed by THE TIN DRUM producer Franz Seitz, who also produced both films -- some twenty years after producing a picture based on Mann's celebrated story "Tonio Krüger."

For those of you who aren't familiar with the novels, both works explore the hazy margins between disease and inspiration, art and malady, genius and madness. THE MAGIC MOUNTAIN is the magic realist chronicle of the education and elliptic romances encountered by a young German male while stuck for a long period of time at a health sanitorium high in the Swiss mountains, and DOCTOR FAUSTUS is the fictional story of classical composer Adrian Leverkuhn, whose musical genius is rumored to have been cemented through a deal with the Devil.

This is one of those DVD releases that sneak out completely under the radar, so I thought I would bring it to your attention -- merely as a public service. Incidentally, if your knowledge of Mann's work is limited to a viewing of Visconti's DEATH IN VENICE, you haven't yet discovered him. These productions bode well to be the ideal place, short of the books themselves, to get acquainted.
Posted by Tim Lucas at Wednesday, June 27, 2007