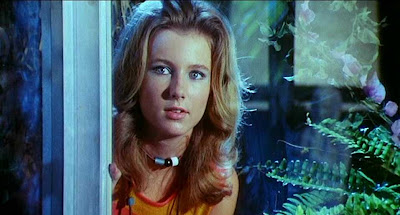 Ely Galleani, credited as Justine Gall, peers indoors at the events of Mario Bava's underrated 5 DOLLS FOR AN AUGUST MOON.
Just as Anchor Bay's forthcoming remaster of LISA AND THE DEVIL is a conspicuous improvement over what we've had before, their remaster of 5 DOLLS FOR AN AUGUST MOON [Cinque bambole per la luna d'agosto, 1970] included in THE MARIO BAVA COLLECTION VOLUME 2 is also significant. For one thing, it's the first anamorphic DVD presentation the film has ever had. The disc includes two soundtrack options: the English dub and the original Italian dub track with English subtitles, both included on the 2001 Image Entertainment disc.

I wasn't able to record an audio commentary for this movie, unfortunately -- I would have much preferred talking about it than BARON BLOOD (which ABE requested I talk about instead) -- so I popped the disc on with the intention of giving it only a cursory spot check. It was such a pleasing experience, I ended up watching the entire movie. From the first shots, the anamorphic presentation helped heretofore unsuspected details to pop off the screen at me, along with richer colors, so I sat transfixed till it was over. 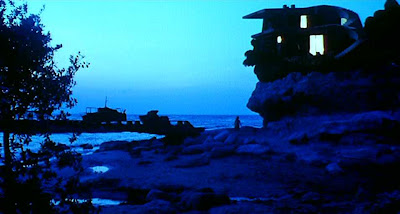 In shots like these, revitalized to the depths of their original color palette, you can understand why French critic Pascal Martinet (author of the first-ever book on Bava's films) called 5 DOLLS "a veritable symphony of blue." 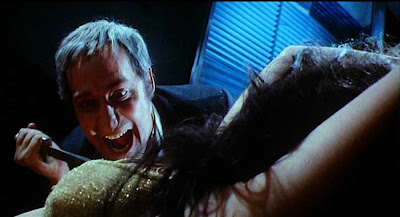 At times, I felt I was watching a movie I had never seen before, or at least not so fully experienced before. Like LISA, 5 DOLLS is drenched in sensual details and the crispened image and heightened color amplify its intentions in this regard. 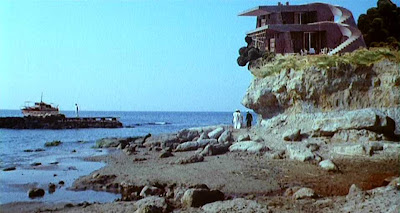 Never before have I seen the details of this particular trick shot quite so clearly. I had always assumed that the ship and the beachfront house were part of the same glass matte set-up. The new clarity of the anamorphic transfer exposes new detail and dimensionality to the house, suggesting that, while the boat was a clipped photo affixed to glass in front of the camera, the beach house and the ridge it occupies were more likely a foregrounded miniature. 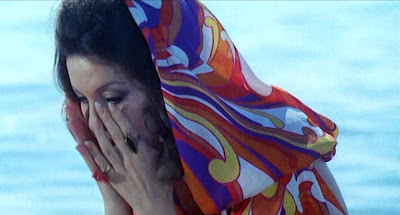 I've always loved this swirling colored caftan worn by Edith Meloni in the film. It's even lovelier now. Congratulations to Post Logic Studios for a job well done. 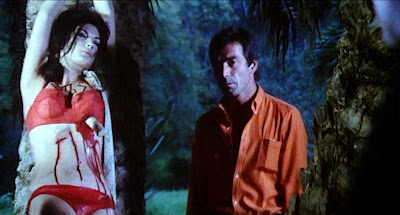 The Italian soundtrack gives the film a smarter, more staccato feel; I recommend it over the lazier English dub. Had I recorded a commentary for 5 DOLLS, I would have argued against its reputation of Mario Bava's worst movie (far from it!) and discussed its curious tendency to frustrate viewer expectations. I would have also pointed out that the movie's highly unorthodox and LOUD use of rock music predates Dario Argento's uses of Goblin's progressive rock score for DEEP RED by several years, though Argento tends to be universally credited with introducing rock to horror cinema. Bava also toys with the diegetic placement of music, with soundtrack sometimes revealed as being played on records by the cast, as Argento also did in TENEBRAE. This is a woefully obscure and underrated movie -- Bava's only film to bypass US theatrical distribution altogether -- and it may have been his most progressive. Happily, it was been winning more admirers in recent years, mostly through the initial persuasion of Umiliani's brilliant soundtrack, and I suspect it will find still more converts after the release of this fine presentation. 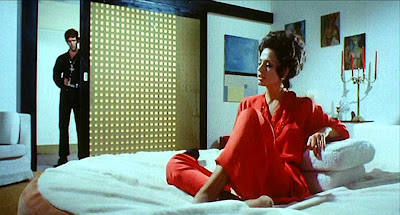 The one area in which this new 5 DOLLS does not meet the standards of the Image release is in its menus, which are attractive but no more than functional and straightforward. The Image menus not only featured samples of Piero Umiliani's and Il Balletto di Bronzo's original score in bold stereo, but it incorporated a playful graphic of a character whose eyes began to drift around if you left the main page in play to listen to the music. I wish the disc producers had been able to spend more time and money on details such as this (I know they wish the same thing), but budget was obviously concentrated on those areas where it was most important. I wouldn't recommend that anyone throw the previous disc away, because its menus are classics, like a love letter to the film's highly specialized clique of fans -- but it's no more than a conversation piece when compared to this otherwise well-advanced presentation.
Posted by Tim Lucas at Monday, September 17, 2007