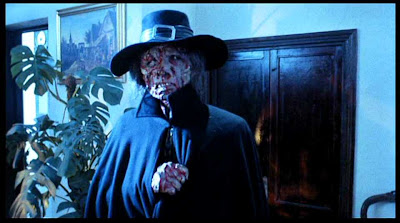 Filmed in sumptuous Technicolor, Mario Bava's BARON BLOOD has always looked somewhat pasty on home video. This is not only a symptom of the longer European cut, which replaced the shorter, rescored American International version on tape and disc in the 1990s; even the old HBO videocassettes were lacking in brilliance. I first saw BARON BLOOD on the CBS LATE MOVIE circa 1973 and I've never forgotten how ravishing it looked -- primarily because the home video versions have never let me forget. But the film has now been treated to a top-to-bottom digital remastering in advance of its release as part of Anchor Bay Entertainment's THE MARIO BAVA COLLECTION VOLUME 2, and my test disc comes close to perfectly capturing the handsome Gothic luxuriance I remember from my first viewing almost 35 years ago. 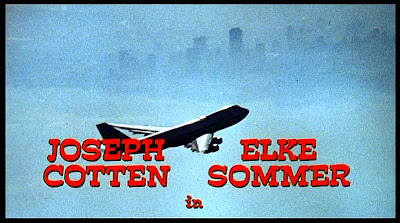 Here, in the film's opening shots, you'll see the stepped-up grain levels common to optical title overlays. However, ABE's new remaster marks the first time when I've noticed that some of that "grain" (the area at 2:00 in front of the Pan Am 747's nose) is actually schmutz on the window of the plane carrying the photographer of the 747! 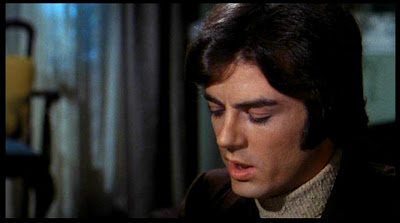 This isn't the best grab of actor Antonio Cantáfora I could have showed you, but it's excellent in terms of showing you the transfer's attention of detail. Look closely at Antonio's cheek and you'll see some lines there. Either he had some mild scarring, or his skin buckled on his pillow the night before and hadn't quite smoothed out by the time he had to shoot his close-up! 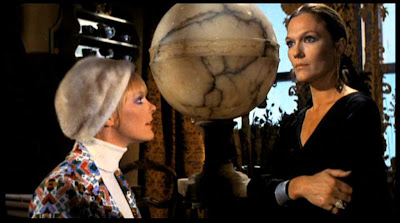 This shot of Elke Sommer and Rada Rassimov is a good illustration of the transfer's warm skin tones and sharp detail, especially in the colorful design of Elke's coat. There are medium shots of Elke, too, in which the details of that coat are perfectly legible and assertive in their coloring. 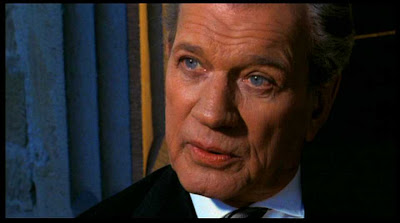 "Meester Beckair ist da ghost..."
Again, in this closeup of Joseph Cotten, the framing and coloring beautifully capture the full range of warm and cold tones. Very crisp-looking, and the blue of Cotten's eyes really pop. 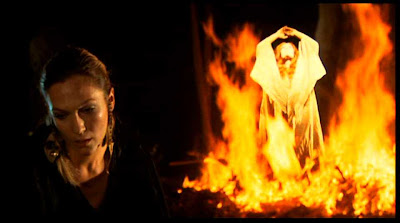 When the film brings in the warm colors -- amber gels, the gold of the Baron's treasure, and bonfires like this -- now you can really feel them. 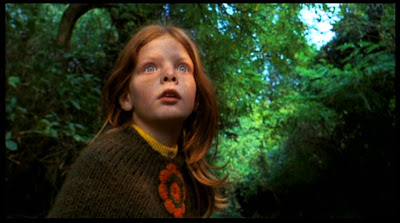 I've never been too knocked out by this particular shot of piccola Nicoletta Elmi before; it's a fairly straightforward shot, but I'm newly impressed by the range of colors and textures in it -- the greens of the foliage are rich and lovely, Nicoletta's auburn hair is beautiful, her frightened eyes are expressively and icily blue, and you can see every stitch in her knitwear. 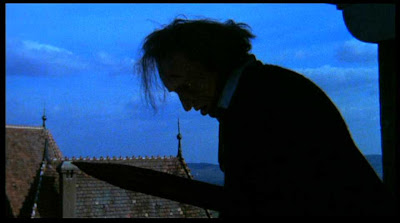 This has always been a tricky shot to convey on home video. This dead, impaled character has a glassy glint in his eye that's always played a game of "now you see it, now you don't" on VHS and DVD. It's very apparent here, and the newly enriched blue of the formerly pastel sky in this day-for-night shot is now a convincing register of dusk. 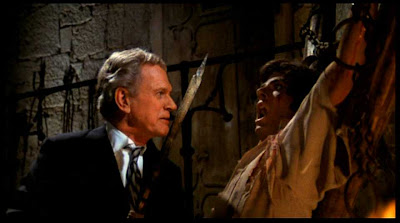 So, yes, I'm very happy about this new transfer too, as I have been with the others I've shared with you so far.
As you may remember from an earlier confession on this blog, BARON BLOOD was the last of the three audio commentaries I recorded last December in an evening-long bout. For that reason, I was frankly a little wary about listening to it. I remember feeling that my voice was shot when I finished recording it, but I can't hear any wear or tear on my vocal cords on the finished track at all. I don't think anyone's going to call it the best of my commentaries, but that's to be expected -- and it's okay; BARON BLOOD isn't really one of Mario Bava's best movies. That said, I do think the track is above average -- it's got some quiet patches I could have filled with more prep time, but it's also the beneficiary of some recently unearthed information that didn't make it into MARIO BAVA ALL THE COLORS OF THE DARK.
Post Logic Studios' exemplary restoration work on the picture has, in a matter of speaking, given BARON back its BLOOD, strengthening its proud pulse and revitalizing its long-lost warmth and complexion. Consequently, BARON BLOOD is now a more enjoyable and entertaining experience than this European version has ever been on home video. With Bava's lighting and the film's Technicolor palette finally back in the fullest sway we are likely to see, it's above average too.
THE MARIO BAVA COLLECTION VOLUME 2 streets on October 23.
Posted by Tim Lucas at Thursday, September 20, 2007