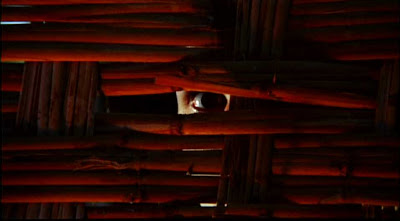 When Image Entertainment released Mario Bava's ECOLOGIA DEL DELITTO (1971) back in 2001, they had many different English titles to choose from. It's known by many, ranging from CARNAGE to BLOODBATH to LAST HOUSE PART 2. Though the title on the print itself read "A BAY OF BLOOD," Image opted for commercial reasons to go with the best-known US theatrical release title, TWITCH OF THE DEATH NERVE. For its forthcoming reissue as part of THE MARIO BAVA COLLECTION VOLUME 2, Anchor Bay Entertainment is reverting to the title on the print, which was also used for MPI Home Video's first VHS and Beta releases of the title back in the late 1980s. 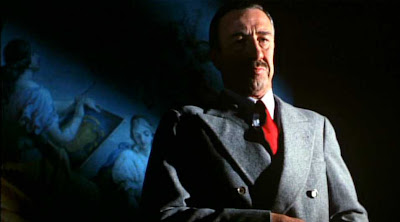 BAY OF BLOOD is one of the films in the ABE set for which I recorded an audio commentary, and the track turned out fairly well. Because I know this film pretty much inside and out, and because my time was limited, I did my least amount of preparatory scripting for this track. So you'll hear a looser, more conversational me than you usually do in an audio commentary, where I tend to put on my professorial airs. Listening to the playback, I caught myself making only one error, but I'm not going to tell you what it is. You can have a contest among yourselves to find it, if you like. 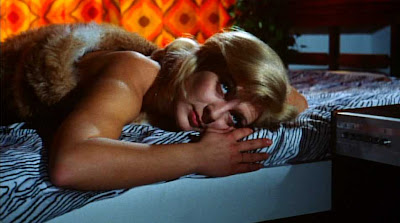 Disc producer Perry Martin and his team at Post Logic Studios have executed a splendid visual restoration of the picture. It's the first home video rendering of this Technicolor feature that looks authentically like Technicolor, and the color intensities also match those of the color production stills in my possession. The blacks are also now noticeably deeper. You can almost feel the bedded warmth of Anna Maria Rosati's body in this shot. It's the first time this shot has ever reminded me of a similar shot of Daliah Lavi in THE WHIP AND THE BODY, which we pictured on the cover of VIDEO WATCHDOG #39 many years ago, and which now opens the "Love and Death" section of MARIO BAVA ALL THE COLORS OF THE DARK. 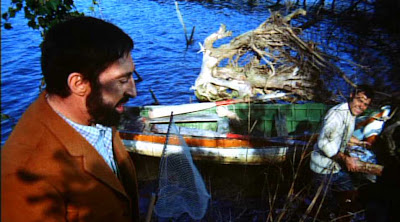 From a chromatic standpoint, I was also newly impressed by this shot featuring Leopoldo Trieste and Claudio Volonté. The water is a rich sapphire blue, the boat looks almost freshly painted, and the skin tones are accurate. 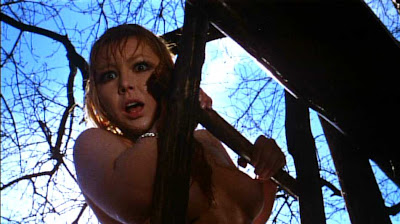 I haven't done a side-by-side check with any of them, but, to the best of my memory, I believe earlier transfers of this scene were brighter, making Brigitte Skay's breast more visible. Bava would have approved of the subtlety and light accuracy recaptured here. 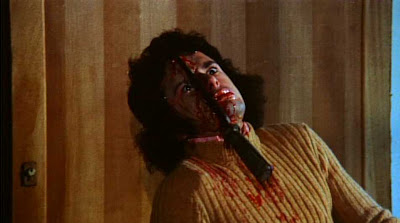 The Image disc was rightly criticized for failing to eliminate a large volume of distortion, pops, clicks and sizzles from the audio track. I'm told they were there in the original source, and were still there when the source came to Post Logic, but the audio has been almost completely cleaned up. Doing spot audio checks of the disc here on my computer, I couldn't hear much in the way of unwelcome sound; on my home entertainment system, I did a similar check and occasionally turned up the faintest afterburns of noise clinging to sudden bursts of sound, such as bird cries. There remains some limitation in the audio source, which doesn't deliver much in the way of bottom, but it's acceptable. Put it this way: the audio is no longer distracting. 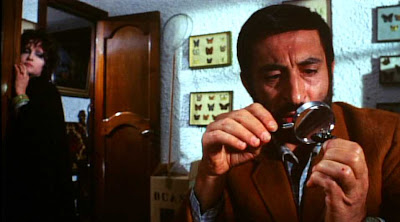 The framing also seems ideal. I'm reminded by this dialogue scene between Laura Betti and Leopoldo Trieste that all of my region-free readers who admire this film should waste no time in tracking down a copy of the Italian release, called REAZIONE A CATENA (which means "Chain Reaction"). All of the film's dialogue scenes were shot two different ways -- once in Italian and once in English -- and the Italian release includes the never-before-exported Italian dialogue (along with English subtitles, quite different to the dialogue you'll hear in the ABE version)! The Italian track has a more intellectual and philosophic tenor to it, raising the film even higher in my estimation, and the actors speak their lines with greater ease and confidence. Released in Italy by Raro Video, REAZIONE A CATENA is available here in America from Xploited Cinema, and it's a must-have for all Bava fans. 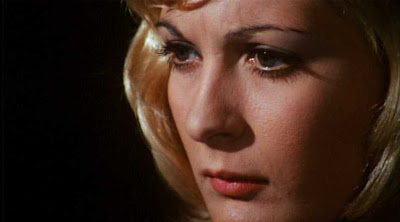 The improved image quality is crisp enough to deliver skin textures as well as tones in close-ups like these. 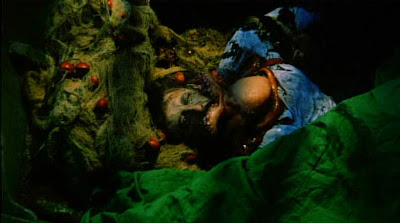 Under any title, BAY OF BLOOD is one of Bava's most beloved and influential films and, once again, ABE's new remaster proves a noticeable upgrade in quality. And yes, the radio spots and CARNAGE trailer have been ported over from the previous Image release.
Posted by Tim Lucas at Tuesday, September 18, 2007