An Open Letter to Steve Ditko on His 80th Birthday 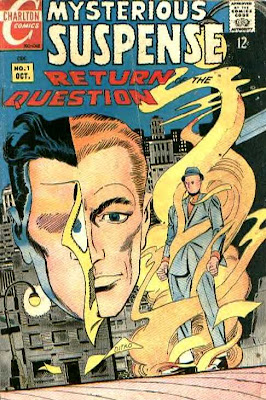 Dear Mr. Ditko:
Forgive me for taking a personal communication public, but I don't know how to reach you privately. I know that today is your 80th birthday and I cannot let the day pass without somehow taking this opportunity to tell you how much your work has meant to me, ever since my own years were in single digits.
I know that I must have first become acquainted with your work as an artist on monster comics like Charlton's GORGO and KONGA, but I only became devoted to it, as so many others did, with your work on THE AMAZING SPIDER-MAN. I began collecting it with #13, the introduction of Mysterio -- who, in a Spider-Man novel (THE GATHERING OF THE SINISTER SIX) later written by Adam-Troy Castro, was revealed to be a reader of my magazine, VIDEO WATCHDOG.
There remains something about the covers you did for #13 and 14 (which introduced the Green Goblin) that exert a tremendous pull on my imagination. The Green Goblin was never a more frightening apparition than on the cover of his debut issue, his evil somehow all the more accentuated by the accompanying blurb "Do you think he's cute? Does he make you want to smile?" And Mysterio seems to me, of all your costumed villains, the perfect distillation of your talents into a single figure. 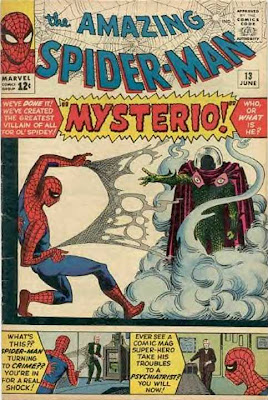 I've always suspected that you drew heavily on the horror and science fiction and fantasy films of the 1950s and early '60s for inspiration, and in the smoke-encircled aspect of Mysterio, I've always detected a hint of Mario Bava -- the cinema's master of smoke and mirrors. It made perfect sense to me that, in his later incarnations, after you left the book, Mysterio was identified or reinvented as a former special effects technician; it was consistent with your vision and with the Bava connection. Anyway, I am certain that meeting your work with that Mysterio cover played a part in defining me as Bava's biographer, years before I actually saw his work. Your art planted the seed of my response to movies like PLANET OF THE VAMPIRES and HERCULES IN THE HAUNTED WORLD.

Your work on THE AMAZING SPIDER-MAN #33 ("The Final Chapter!") and the first SPIDER-MAN ANNUAL, with its splash pages for each of Spidey's encounters with the separate members of the Sinister Six, are rightly celebrated as highlights of your tenure at Marvel. Now I regard the DOCTOR STRANGE comics you drew as the apex of your achievement. As a child, those comics a bit over my head in terms of narrative, but I spent many hours perusing them and trying to make sense of the mind-boggling tableaux therein. As I've said before, I consider it one of the great losses to 20th century cinema that Mario Bava never adapted your DOCTOR STRANGE to the screen. 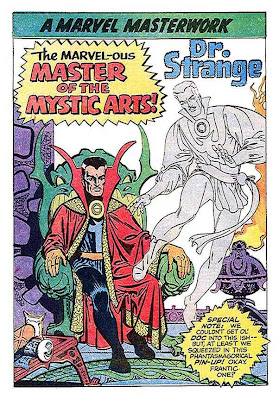 I was very disappointed when you left Marvel -- John Romita did a fine job, distinctive in its own right, but I've always had grave doubts that Spider-Man would have been able to survive that creative divorce without the ruthless hook of the dual unmasking of Spider-Man and the Green Goblin in #39 (possibly the most eventful single issue of a comic in history). When I next discovered your work, I seem to remember it was on the cover of a Charlton comic, probably your work on CAPTAIN ATOM or THE BLUE BEETLE. This discovery marked an important event in my development as an art lover: you were the first artist whose work I was able to identify by sight, by the personality of your art, rather than by signature.
I can remember buying comics featuring your cover art, assuming that you drew the inside stories as well, only to be disappointed when you drew nothing inside or perhaps only a four-page story -- but there was never any question of not buying those comics; I had to buy them, if only for the cover. I had the same joyous experience when I found the first issues of MYSTERIOUS SUSPENSE, BEWARE THE CREEPER, and THE HAWK AND THE DOVE on the newsstand at my local five-and-dime. Those covers continue to hold a high rank on my personal list of your favorite covers, which also include some of your earliest work for the covers of SPACE ADVENTURES and THE THING. 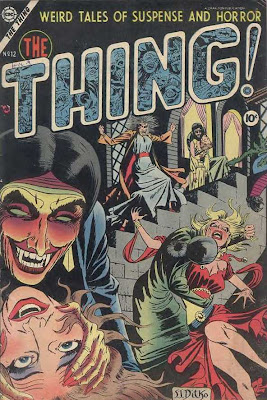 Suffice to say, anytime I came home with a new Ditko comic in the bag was cause for celebration, and my excitement would jolt even higher when I bought a new comic like T.H.U.N.D.E.R. AGENTS, brought it home, and found some new masterpiece by you buried inside.
After more than 40 years of pondering the question, I find myself no closer to an understanding of why I respond to your work so profoundly. I know that some art appeals to us by virtue of its technical mastery, its proximity to subject, while other art appeals to us through the emotion invested in it.
Frankly, and this is certainly no criticism, I can't say that either qualification applies to your work. However, I also believe that there is art that appeals to us because it comes to us from out of nowhere, without precedent, and stands before us as something perfect and individualized. We gawk at it because we cannot fathom its origin or manner of execution. It did not exist before, yet we cannot un-imagine it; it needs to exist and fills a suddenly obvious gap, not only in the place it occupies in the history of art, but in the uncharted terrain of our collective imagination.
This is ultimately the final explanation I can offer for your work's unique appeal. It is also my definition of genius. 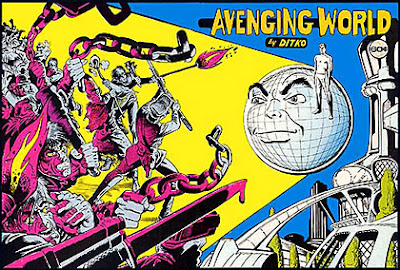 I also want you to know that you've been an inspiration to me above and beyond what you have achieved in your art, and I say this as a great admirer of some of your most controversial work, such as THE AVENGING WORLD (a particular favorite). If the select group of men and women I have chosen as my personal heroes have anything in common, I've usually found out that the maverick stance of their art is a reflection of the maverick stance they have taken in life, and you are surely one of these. Like many other of my heroes, including Bava, you have pursued life as an artisan rather than as an artist, which has resulted in a life of work rather than what one might characterize as a "career." You have willfully chosen to take a more difficult and challenging path through your profession by shunning publicity and remaining true to your core ethics concerning life and business. Your brave and admirably stubborn example has helped me to see that there are more (and more rewarding) ways to spend our time in this world than placing ego before ability and becoming hellbent on success at any cost. Because I know nothing about your personal life, I can only hope that your dedication to your ethic and philosophy has not been entirely solitary and that you have known much personal happiness.
This is my birthday wish to you, because your work has brought me, and so many others, so much happiness over the years.
Sincerely yours,
Tim Lucas
Posted by Tim Lucas at Friday, November 02, 2007