You Axed For It! 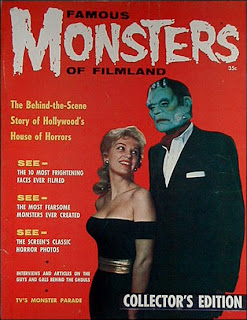 Published 50 years ago today -- February 27, 1958 -- was the first issue of FAMOUS MONSTERS OF FILMLAND. "Welcome Monster Lovers," the Editors greeted their readers on page 3, "You're Stuck! The stuff this magazine is printed on, which looks so much like ordinary black printer's ink, is actually glue. YOU CANNOT PUT THIS MAGAZINE DOWN!"

The joke was to become more true than editor Forrest J Ackerman could ever have envisioned -- half a century on, FAMOUS MONSTERS remains as undying as the Frankenstein Monster himself. Seized by schoolteachers, thrown away by parents, it has survived. Most serious genre devotées tend to agree that FM's best days were over by the time they published their 50th issue, by which time the dry rot of reprintism had commenced (the cover of #50 was in fact a reprint of #11's cover), followed by a brief burst of renewed inspiration that lasted from #56 (their Karloff memorial issue) to #66 (their OLD DARK HOUSE Filmbook issue). Nevertheless, the long-dead version of FM helmed by Ackerman -- not to be confused with the modern day FM published and edited by Ray Ferry, which has announced its imminent discontinuation with #250, after a 50-issue run -- remains an ever-vital topic of conversation in the "Horror Books and Magazines" folder of the Classic Horror Film Boards, continually drawing more attention (and heated debate) than other folders pounding their respective drums for contemporary publications ranging from MONSTERS FROM THE VAULT and LITTLE SHOPPE OF HORRORS to, yes indeedy, VIDEO WATCHDOG.

A perusal of FM's fateful first "Collector's Edition" issue -- which is being released today in a special replica edition ($39.95) from the current publisher -- confirms its value as an opening salvo well fired. It's rich with diverse images, ranging from shots of Lon Chaney Sr. in various roles to images from Universal, MGM, Monogram, AIP, Toho and even Mexico's Churubusco Studios. A remarkable ratio of the photos have retained their rarity over the past half-century, from an unexplained shot of makeup artist Harry Thomas applying NEANDERTHAL MAN makeup to a busty starlet identified as Wanda Barbour, to a pictorial article by Paul and Jackie Blaisdell showing how the bulbous heads of the Saucer Men from INVASION OF THE SAUCER MEN were cooked-up. There's also an ad for a KTLA Channel 5 show called NIGHTMARE, which ran the then-new "Shock Theater" package of films from Universal, which was hosted by a now-forgotten missing link between Vampira and Zacherley -- actress Ottola Nesmith. There's a reprint of monster-themed comic strip by artist Will Elder (carried over from a forgotten humor magazine called HUMBUG) and a Monster Quiz on the last page that's played for laughs, but the laughs are at least on par with what MAD Magazine was delivering around the same time. The issue doesn't hold up particularly well as scholarship -- a photo of Bernard Jukes as Renfield in the stage production of DRACULA is carelessly identified as Dwight Frye, FRANKENSTEIN is identified as a 1932 release, and the "articles" are generally an unreadable melange of filler, bluster and filibuster -- but it's noticeably better than the kid stuff which the magazine later degenerated into, and not nearly as specialized or restricted in its genre coverage as the magazines it inspired have tended to be.

Either directly or indirectly, the first issue of FAMOUS MONSTERS sent out shock waves that changed the course of film history; there has never been a comparable publishing event allied to any other film genre. (FM publisher James Warren later launched comparable magazines devoted to Westerns, serials, and science fiction films, none of which lasted very long.) Between February 1959 and March 1983, FAMOUS MONSTERS produced 191 issues -- 181, if you don't count the ten issues of the short-lived sister publication MONSTER WORLD that were later "incorporated" into its numbering. Its demise has been credited to any number of faults, from excessive reprints, to an inability to mature with its readership, to its eventual emphasis on the sci-fi product of the time like STAR WARS, E.T. and FLASH GORDON. (One issue featured THE DEVIL AND MAX DEVLIN on the cover, of all things.)

But there is something about the original FM, with its rich-smelling rotogravure paper and magnificent Basil Gogos cover art, something potent enough to overwhelm the lesser memory of its majority output and the sour feelings associated with buying issue after issue larded with reprints to keep one's collection intact. FM had the good fortune to be the first of its kind, at least in most readers' experience, and to hit those readers at an age when important impressions run deepest and strike the oil of everlasting gratitude. Part of FM's enduring appeal is sentimentality, to be sure, but, even though I ally myself with those for whom Calvin Beck's CASTLE OF FRANKENSTEIN was the more important and defining and valuable publication, I am quick to admit that CoF never yielded a single issue that was quite so much a feast as, say, FM #13 (their 100-page issue) or #21 (their BRIDE OF FRANKENSTEIN issue). My memory of the very first issue of FM I ever saw, #27, is burned deeply into my brain; and today, as I flip through its pages again, I find that it still has no serious rival in my mind as the most photographically compelling issue of any film magazine I've ever seen.

The authority figures of my youth often criticized me for my interest in FM and similar publications, thinking that it was rotting my brain rather than honing it, and presuming that any time I applied to such pursuits would be wasted. But, thanks to the subculture that was first seriously excavated and brought together by their efforts, publisher Warren and editor Ackerman prepared a place (alright, a crack) in the world where I might earn the living I do today, and have done for the past two decades or more -- and I'm ever grateful. Today, FM is almost analogous to rhythm and blues as a 1950s taproot; even if you've never heard it, it's there in all the rock music that you do hear. Even if you've never seen an issue of FM, its influence is unavoidable in the genre film magazines you do read -- it's there in humorous captions, the emphasis placed on production dates, the corny names for letters columns, and in the ongoing tradition of extraordinary cover art.

In 1991, I was honored to be asked to join the likes of David J. Schow, Steve Bissette, Tony Timpone, Michael Weldon, Drew Friedman, Bill Warren, Jean Claude Romer, Gahan Wilson, and many other disciples in contributing an article of appreciation to THE FAMOUS MONSTERS CHRONICLES (FantaCo Enterprises), edited by Dennis Daniel. It's in this long out-of-print book that you'll find my fullest tribute to "The Magazine Monsters Believe In" and its merry, mustachioed Master of Cemeteries -- a piece called "FAMOUS MONSTERS Took Away My Fear (1990)." But I can't allow this golden anniversary to pass without acknowledging the importance of this day and sending my salutations to those whose early effort made jobs like mine possible.