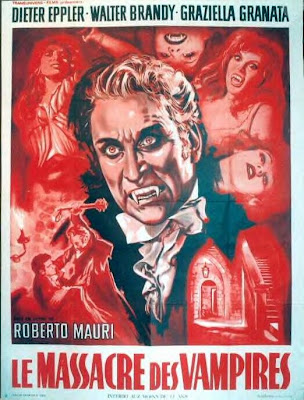 Dieter Eppler, a German-born but quite international actor whose career encompassed everything from Edgar Wallace krimis and Italian vampire films to the occasional art film like Jerzy Skolimowski's DEEP END, has died in his hometown of Stuttgart, Germany at the age of 81.

A stage actor from the time of his graduation, Eppler made his screen debut in the early 1950s under his birth name of Heinz Dieter Eppler. Though the Edgar Wallace krimis didn't really come into vogue until Rialto Film began producing them in 1959, Eppler was already an old hand at Wallace by then, having played the role of Sgt. Carter in an earlier TV movie for SDR: Franz Peter Wirth's Der Hexer (1956), based on Wallace's novel THE GAUNT STRANGER. After attracting further attention as the lover of a decapitated and re-capitated stripper (!) in Viktor Trivas' Die Nackte und der Satan (US: THE HEAD, 1959), Eppler made a proud addition to the repertory cast of Rialto's Wallace series, first appearing as Joshua Broad in Der Frosch mit der maske (US: THE FELLOWSHIP OF THE FROG, 1959).

The Wallace-krimis demanded memorable faces, and Eppler had a great one. His burly build, combined with his virile features, wavy hair and piercing eyes, made him the ideal henchman, maniac, tradesman or nobleman. During the 1960s, he appeared in a variety of sizeable roles in such well-remembered German productions as (let's stick to the American titles) THE HEAD, THE TERRIBLE PEOPLE, THE STRANGLER OF BLACKMOOR CASTLE, THE WHITE SPIDER, THE SINISTER MONK, THE DEATH RAY MIRROR OF DR. MABUSE, and Jess Franco's LUCKY THE INSCRUTABLE. He was a particular favorite of director Harald Reinl, who cast him several times in later projects, including a 1966 remake of Fritz Lang's Die Niebelungen and also in Die Schlangengrube und das pendel (1967), the Christopher Lee vehicle variously known as CASTLE OF THE WALKING DEAD and THE TORTURE CHAMBER OF DR. SADISM.

One of the stranger turns of Eppler's career was his star turn as the chief bloodsucker of Roberto Mauri's La strage dei vampiri (SLAUGHTER OF THE VAMPIRES aka CURSE OF THE BLOOD GHOULS, 1963). His characterization was a throwback to the tuxedoed Bela Lugosi model of the 1930s, while also charged with the violence and eroticism that Christopher Lee had brought to Count Dracula in HORROR OF DRACULA (1957); in some ways, this blending of influences, combined with Eppler's well-fed physique and the general romanticism of the piece, anticipates Paul Naschy's stylish 1973 stab at the Un-dead: COUNT DRACULA'S GREAT LOVE. 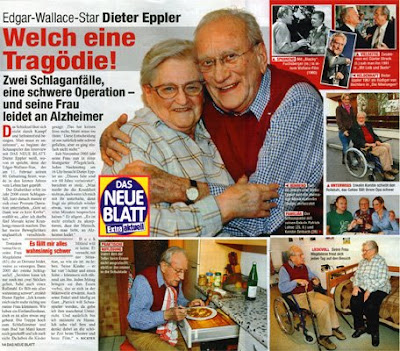 Eppler, married since the age of 20 to the same woman -- Magdalene Schnaitmann -- and the father of five children, remained active in films and television series until 2001, when he retired from acting. This Das Neue Blatt news story from January 7th appears to paint a bittersweet portrait of his later years, which found him and his wife still together after 61 years but increasingly dependent upon their children, as a couple of bad falls consigned him to a wheelchair, and his wife began suffering from Alzheimer's disease. It's a humbling, sobering, yet heart-warming glimpse into the private life of an actor who contributed a great deal to post-war German cinema, and to international popular cinema, as a skilled actor and an unforgettable face.

In other words, as a movie star.