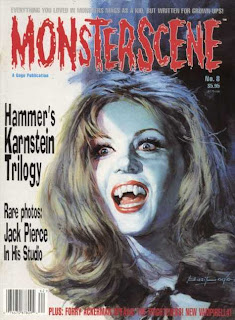 My favorite Basil Gogos painting, executed for the cover of MONSTERSCENE #8, was in her likeness. I was never as dazzled by THE VAMPIRE LOVERS as other Hammer fans were, finding Ingrid absurdly mature to be playing a character so young and ethereal as Carmilla, but I always liked her COUNTESS DRACULA and thought she had her most exquisite moment onscreen in THE HOUSE THAT DRIPPED BLOOD -- if only THAT briefly evoked vampiress had a full feature in which to flex her wings!

But it is the flirtatious, warm-blooded, real life woman I am remembering now, from our meeting at the October 1994 Chiller Theater convention. She understood men and knew how to play them; in the few days we spent in the same hotel, we ate, argued, flirted and talked together -- about her early life in Poland and about the death of her SOUND OF HORROR cast mate Soledad Miranda, among other things -- and she spoke of her pain in ways that made me feel it too. When I checked out, she was there at the front desk to kiss me goodbye.

Ingrid Pitt was in fact the reinvention of a Polish girl named Ingoushka Petrov, born to obscene poverty in war-torn Poland, whose adolescence was scarred (as she told me) by peers who jeered her as "flat-chested." She was not only an actress but also a published writer and entrepreneur, with four novels and several more anthologies and memoirs to her credit. I heard she could be a shark in business, which I respect, as I do the fact that she managed to found a cottage industry out of being Ingrid Pitt, scream queen and survivor. Now the surviving is over and the enduring may begin.