Hammer fans have been torn on their response to Lionsgate/Icon's new Region 2 Blu-ray/DVD set of Terence Fisher's DRACULA (1958). Everyone is overjoyed to finally see the long-censored decomposition scene as it was intended to be seen, while others have complained that the film now looks too blue or too dark. As it happens, I can't agree with either side of that criticism. The film looks just fine on my 60" Kuro Pro monitor, but after carefully examining the three surviving Japanese reels included as a bonus supplement in the set, I can't agree that we're seeing the decomposition scene as it was intended by director Terence Fisher to be seen either.
Let us begin with a series of frame grabs from the 2012 restoration, beginning with the skeleton of Dracula's hand emerging from the ashes of its disintegrated flesh. This material runs from 79:43-44. 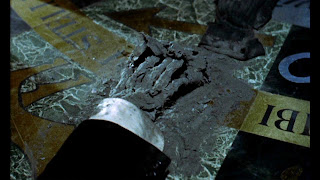 The film then cuts to a baleful close shot of Dracula's face, Christopher Lee investing the moment with pathos and defeat. 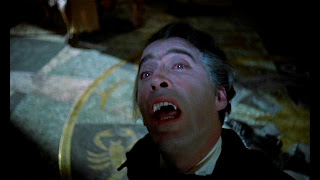 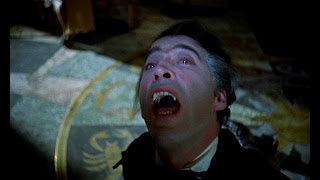 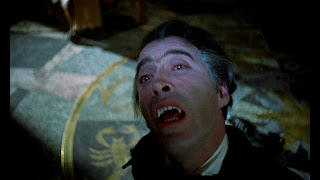 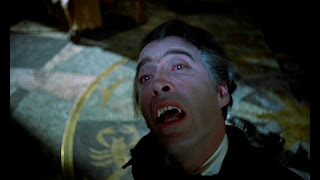 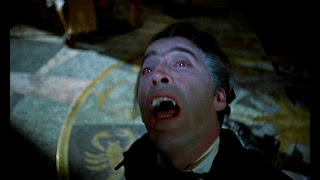 The film then cuts back to Dracula's arm as the last of the ashen flesh crumbles and the sleeve of Dracula's coat shrinks back to expose the crumbling bones of his forearm. 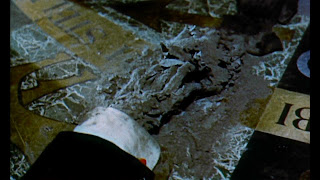 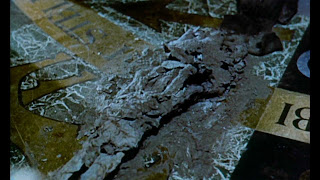 Now the same moment as it appears in the Japanese print, Reel 9. The first shot appears to hold slightly longer as the skeleton of the hand disengages from the papery flesh. The restoration holds true to the original release version by retaining only the last frames of the shot. It's much more apparent here that the bones are coming free of what was once flesh. 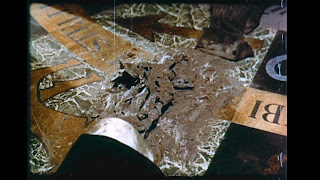 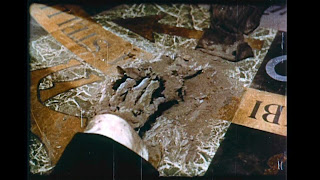 And now comes the important stuff -- 33:22-23 in the Japanese reel supplement. Here we find a completely unique reaction shot of Christopher Lee as Count Dracula, no longer passively withering into defeat but nearly in tears against his ruthless opponent as the rays of sunlight converge to slay him. I've stepped through the footage and snapped a progress frame with every five beats. 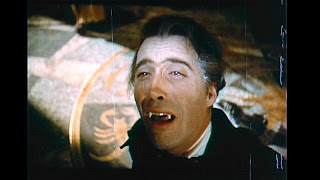 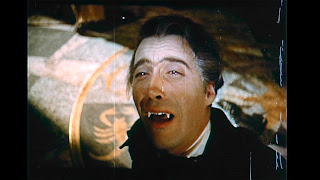 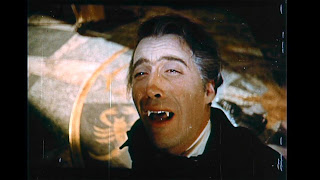 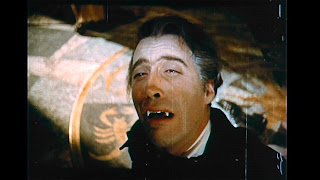 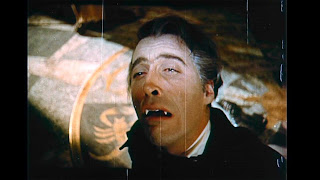 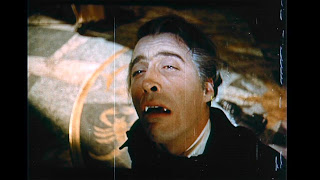 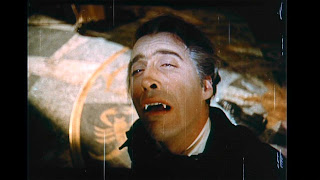 It's a wonderful discovery and a tragic omission. In these 30 or so frames, we see the fight bleed out of Dracula; it's his moment of recognition that he's losing everything. The scene then continues with the shrinking of the coat sleeve from Dracula's arm. 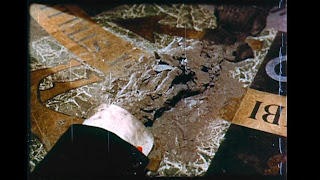 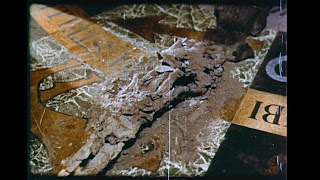 I don't think this could be a matter of the restoration team choosing to keep the footage we've always known for two reasons: 1) in every other instance, they went with the alternate footage found in the Japanese print, and 2) they have made no mention anywhere of this alternative reaction shot of Dracula. I sincerely believe they overlooked it, so intent were they on the scene's special effects gore that they failed to see a blatant variation of performance.

More about this and my evaluation of the remainder of the restoration in the next issue of VIDEO WATCHDOG -- #174.
Posted by Tim Lucas at Thursday, April 11, 2013