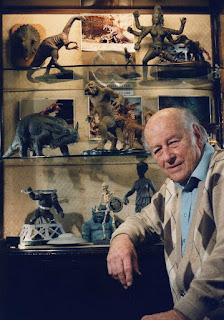 There could be no "right" time to awaken to the news of Ray Harryhausen's death at the age of 92. His was a life well-lived, a career well-played, and a legacy well-acknowledged; even so, such news crashes, flying saucer-like, into the wide-eyed child in all of us, whom he entertained for so many decades with ideas and imagery consistently larger than life.

He was not the originator but rather the exemplar of stop-motion animation. He took a scientific principle and gave it a consistency and character that was never-before-seen yet part of an essential tradition of storytelling traceable to the earliest etchings on cavern walls, when stories were brought to life by flickering candlelight rather than a rattling neighborhood movie projector. For the Baby Boomer generation, Ray Harryhausen was Mother Goose, the Brothers Grimm, La Fontaine and the Arabian Nights all rolled into one, himself animated by a heart of adventure whose depth and scope were worthy of H. Rider Haggard.

For those of us who saw his work writ large on theater screens, his name summons a seemingly endless ribbon of marvels, unforgettable scenes all the more remarkable in that they were the work of a single man working in a kind of Aladdin's cave of lights, scale models, measuring instruments and rubberized armatures given the illusion of life one meticulous frame at a time. Many of us took our first step beyond monsters, beyond makeup into the larger realm of special effects, under his guiding wing. Anyone who can speak effectively about what made Ray Harryhausen great will note the jagged, angular quality of his stop-motion work, a quality also present in the work of his mentor Willis O'Brien and in that of colleagues like Jim Danforth and David Allen, but there is an additional sleekness, an energy, a tail-thrashing alacrity, a more far-reaching sense of vision in Harryhausen's executions that lends them powers wholly their own. There is something about his fabulous creatures that is both not quite real and yet captivating in a manner that seems to exceed reality and tap directly into the way we imagine, the way we dream.

Moreover, life seemed to burst forth from his creations with a robust exuberance that left the viewer no room to experience anything but awe. When the Cyclops roars into view for the first time in THE 7TH VOYAGE OF SINBAD, it wasn't just cinema that changed; we all changed -- and you can go through his admirably compact filmography one picture at a time and see how each project advanced not only his art but the art form itself. His BEAST FROM 20,000 FATHOMS seems to stand on the shoulders of Willis O'Brien's work in the silent version of THE LOST WORLD, rising ever higher to give us the cinema's first full-scale dinosaur invasion of a modern city, with sound and an attention to detail that went well beyond the anecdotal. In IT CAME FROM BENEATH THE SEA, it was the challenge of animating a series of tentacles -- a dry run for the skeleton armies yet to come, if you will. In EARTH VS. THE FLYING SAUCERS, it was in the way he achieved a personality for the saucers themselves and dazzled us with suggestions of their vast size by having them interact with reality in matte shots and scale models. In 20 MILLION MILES TO EARTH, he produced his first superstar, the Ymir, an alien creature wholly of his own design and, for the first time, thoroughly enriched with character and pathos. And yet the leap from that remarkable accomplishment to THE 7TH VOYAGE OF SINBAD was almost incomprehensible because, in the course of one story, he gave us an entire bag of tricks, presenting us with seemingly infinite variety -- the Cyclops, the Auk, the Dragon, only to top them all with the unimaginable technical challenge of the Skeleton Army. Though the quality of his own contribution was always impeccable, the rest of these films were generally left in the hands of B-picture directors like Nathan Juran, causing serious imbalances in the overall end products; only Bernard Herrmann, who scored his best work, seemed capable of lending the level of support his genius warranted. When he made JASON AND THE ARGONAUTS in 1963, working with director Don Chaffey, his level of quality was carried throughout the entire production. It remains the citadel of his work and one of the greatest fantasy films of all time. It's the favorite film of a lot of little boys inside a lot of grown men, and had it come out of nowhere -- like the original KING KONG -- it would likely be much better appreciated as the miracle that it is.

Thanks to the "protection" of his faithful producer Charles H. Schneer, Harryhausen continued to make his leaps and bounds in a blessed state of hermetic purity until the 1970s, when Steven Spielberg and a malfunctioning robot shark redefined cinematic spectacle and Hollywood found new ways for the cart to drag the horse. He had also risen himself, on his waves of success, to a level of production where too much money was riding on his projects to rest too much on the shoulders of a single man. In Harryhausen's last couple of films, SINBAD AND THE EYE OF THE TIGER and CLASH OF THE TITANS, you can feel his Old World craftsmanship being prodded along by New World production schedules; for the first time, he was being dogged by deadlines, required to hire assistants, to farm out sequences to other animators, and generally pick his battles, reserving his full mastery for those sequences that would best be served by it, like the unforgettable Medusa sequence in CLASH. With word being bandied about of a next project, SINBAD GOES TO MARS, Harryhausen glumly noted "like Abbott and Costello" and announced his retirement in 1984.

Without Harryhausen as an inexhaustible topic of discussion, we would very likely not have anything like the widespread consciousness about special effects that people have today. In 1971, Ernest Farino and Sam Calvin produced FXRH, the first purely technical fanzine addressed to appreciating and deconstructing his backlog of achievement, which in turn inspired other publications such as FANTASCENE and CINEFEX. Harryhausen himself has published a number of books, beginning with his oft-revised and updated FILM FANTASY SCRAPBOOK and including a particularly delectable coffee table devoted to his production art. More recently, Farino has collected the four issues of FXRH in hardcover and has been serially publishing a set of hardcovers assembling Mike Hankin's definitive biography, RAY HARRYHAUSEN, MASTER OF THE MAJICKS. Published in a staggered order, these lush volumes began with Volume II and continued with Volume III (both of which quickly sold out); the first and final Volume, covering Harryhausen's "Beginnings and Endings," was sent to the printer just a few weeks prior to his death today.

It has been said that today's CGI effects have relegated the work of Ray Harryhausen to another time, but it might be more accurate to assign his legacy to another space. Because, unlike CGI effects, whose dimensional quality is absolutely flat and illusory, Harryhausen created alone as an artist what entire armies of people do now as collectives with a series of mouse clicks. His work required him to be a draughtsman and a craftsman -- an idea man, an artist, sculptor, scientist, machinist, mathematician, technician, cinematographer -- and what he produced occupied space as three-dimensional as any ever inhabited by an actor. And through the effort of moving his creations forward by fractions of inches, filling 24 frames per second, he not only moved them, he moved us.