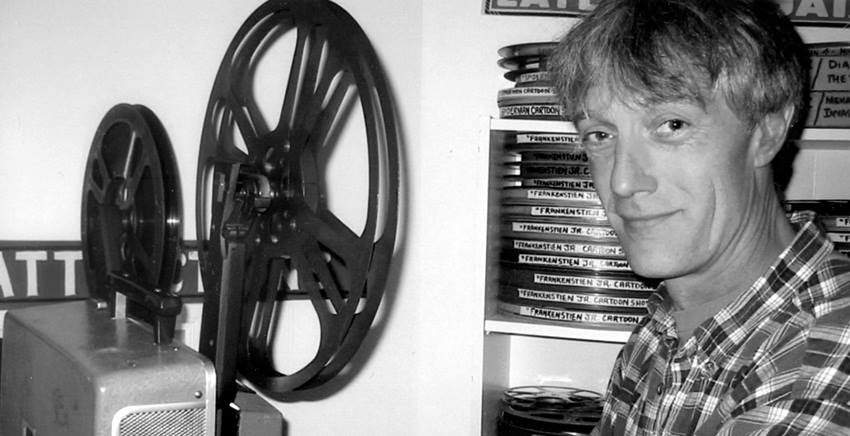 Only two days into the New Year came the startling news that Mike Vraney, the founder of Something Weird Video, had died at the age of 56 after a long and private bout with lung cancer. The announcement was made on Facebook by his wife Lisa Petrucci, who has run the company with him since the mid-1990s and vows─we're glad to hear─that it will continue. Mike had only turned 56 a few days prior to his death, on December 29th─a remarkably short life for someone who made such an enormous difference.

Since founding Something Weird Video (named after Herschell Gordon Lewis' 1967 LSD movie) in 1990, Mike rescued literally hundreds of orphaned features from the brink of extinction and successfully rebranded them to make them attractive, accessible and even fashionable to new generations of fans. It might never have happened if he hadn't broken his foot while skateboarding in 1981. To help him pass the time while recuperating, he asked a friend who knew about such newfangled contraptions if he might set him up with a VHS player and some weird movies from his collection. Mike, who had been a teenage theater projectionist before managing various west coast punk bands  (including The Dead Kennedys), immersed himself in the new video subculture and, as he watched, the gears began to turn.

His first eureka was realizing that tapes could be copied and sold, which he did for awhile before incorporating. When Michael J. Weldon's book THE PSYCHOTRONIC ENCYCLOPEDIA OF FILM appeared in 1983, it presented him with a kind of road map, one that he was able to fine-tune with the assistance of Bill Landis' SLEAZOID EXPRESS and old copies of ADAM FILM WORLD. He was hardly alone in his interest and knew it─everyone who bought Weldon's book suddenly had 500 new films they wanted to see─but Mike didn't just want to see them; he wanted to be the guy who found and provided them. It  turned out to be a job for which he was ideally positioned.

Producer David F. Friedman─by his own admission the last of a chain of exploitation movie con men known as "The 40 Thieves"─dubbed Vraney "the 41st thief" because he had found the forgotten warehouses where orphaned 35mm prints had gone to die and, in ways best left for others to tell in detail, came into their possession. Sometimes these warehouses were literally on the eve of closure, their entire unclaimed inventory destined for incineration. True, they weren't exactly Mike's property to claim but, thanks to his efforts, they survived. Mike sometimes came into possession of multiple prints and meticulously assembled the best reels from each, adding back whenever possible the footage some projectionists of generations past had snipped out for their own personal reels. If a rightful owner's whereabouts were known, they were contacted─or they contacted him. Either way, men and women who considered themselves out of the film business for decades suddenly found themselves in league with a laid-back but tireless young business partner who made their presumed-dead product vital again. Sometimes, as a special reward, they would give him the keys to the kingdom─the personal vaults where they kept their original negatives, including the negatives of some desired titles that eluded capture elsewhere─as well as introductions to their surviving colleagues. Between this and a Midas touch at garage sales, a catalogue of more than 2,500 titles resulted. To be considered the 41st Thief was probably the greatest accolade Mike ever desired, but considering how many films he saved from extinction, it would not be overstating things to call him "the Schindler of 42nd Street."

Mike Vraney raised the dead. Because of him, a wealth of exploitation cinema mostly ranging from the 1930s through the 1970s─movies that were made to play for one or two weeks and then be forgotten─could be examined with sustained vision for the first time. He made them available to fans in search of fun, and very likely some perverts in search of kicks, but his rescues also rewrote film history. Lost films were found. Films shown only regionally within the United States suddenly became available to an international following. "Adults Only" features and featurettes made for wartime/postwar audiences now mostly dead became within reach of their children, grandchildren and sociology majors. Other labels had first introduced the likes of Herschell Gordon Lewis and Michael Findlay to home video, but Something Weird (named after one of H.G. Lewis' films) went for their deep cuts, enabling historians to look past their best-known work to research and chronicle their achievements in toto. As a result, the films tell us about more than just themselves; they tell us things about the periods in which they were made that might otherwise have been lost to posterity.

We're not just talking about SCREAM OF THE BUTTERFLY, THE FAT BLACK PUSSYCAT and PSYCHED BY THE 4-D WITCH; we're also talking about Brian De Palma's MURDER A LA MOD, Abel Gance's END OF THE WORLD, George A. Romero's THERE'S ALWAYS VANILLA, Tony Anthony's COMETOGETHER (a movie with an Apple Records soundtrack!), mondo films like ECCO and IT'S A SICK SICK SICK SICK WORLD, the latter-day smut of Edward D. Wood, Jr., the elusive English dubs of Ernst Hofbauer sex-ed movies from Munich, and the unsuspected early acting gigs of people like Rue McLanahan, Grayson Hall and Richard B. Schull.

Likewise, there are literally hundreds of filmmakers who owe most or all of their contemporary audience to Something Weird Video: Michael & Roberta Findlay, José Mojica Marins, Joseph W. Sarno, Doris Wishman, William Grefé, Armando Bo, Joseph P. Mawra, José Prieto, Lee Frost, Brad F. Grinter, Byron Mabe, Sande N. Johnsen, William Rotsler, Dale Berry and Bethel Buckalew, to name a few─many of whom went on to reclaim their work and see it released on other labels here and abroad. There are also numerous actors and personalities who might have been forgotten without the renewed (or broadened) availability of their work: Audrey Campbell, Uschi Digart, Isabel Sarli, "Julian Marsh" and "Anna Riva", June Roberts, Darlene Bennett, Marsha Jordan, Stacey Walker, Sharon Kelly, Rene Bond, Artimidia Grillet, not to mention the immortal Bettie Page, whose only feature film appearances─TEASERAMA and VARIETEASE, both in color─were considered lost until they emerged through Something Weird Video.

It was Something Weird that recovered such theretofore "lost" horror films as THE HORRORS OF SPIDER ISLAND (and its alternate cut IT'S HOT IN PARADISE), Andy Milligan's SEEDS OF SIN, TERROR IN THE MIDNIGHT SUN (the original Swedish film that was recut into INVASION OF THE ANIMAL PEOPLE here in the States), BLOODY PIT OF HORROR, the Joseph Green recut of Tetusji Takechi's 1964 version of DAYDREAM, THE BEAST THAT KILLED WOMEN, STING OF DEATH, DRACULA THE DIRTY OLD MAN, GUESS WHAT HAPPENED TO COUNT DRACULA, LOVE GODDESSES OF BLOOD ISLAND, THE CURIOUS DR. HUMPP, KISS ME QUICK, the Boris Karloff series THE VEIL, the Lon Chaney Jr. series 13 DEMON STREET, the OLGA films and Michael Findlay's FLESH trilogy. This is by no means a complete list.

Arguably, Something Weird's most important salvage has been nearly all of what is known about that group of films called "roughies," a black-and-white repository for postwar sexual aggression that, once revealed, demonstrated unsuspected ties to 1930's and '40s film serials, 1950s and '60s men's magazines, an occasional parallel to 1960s gore cinema, and a clear predecessor to the bolder horror cinema that followed in the 1970's. Likewise, their collection of "Roadshow Rarities"─vintage exploitation films posing as sex, race and drug education─offers a valuable index of provincial America's ignorance about such matters as recently as just before the arrival of television, and thanks to Vraney's excavations, a fairly complete history of Florida-based filmmaking now stands to be written. As a teens and early twenties, Vraney had worked as a drive-in and porn theater projectionist and never lost his love for the arcana of his profession; Something Weird consequently packaged more volumes of drive-in intermission and trailer arcana than any other label, something for which I remain particularly grateful.

In addition to releasing 2,500+ titles on VHS and DVD-R, Mike produced REEL WILD CINEMA with host Sandra Bernhard for cable television, documentary features (the most recent being 2013's THAT'S SEXPLOITATION, which I covered recently here), and he was also an associate producer on Lewis' one-shot return to active filmmaking, BLOOD FEAST 2: ALL U CAN EAT (2002). Image Entertainment has licensed dozens of SWV titles for release on DVD and Blu-ray and, for several years now, the cable provider Comcast offers a Something Weird On Demand channel. 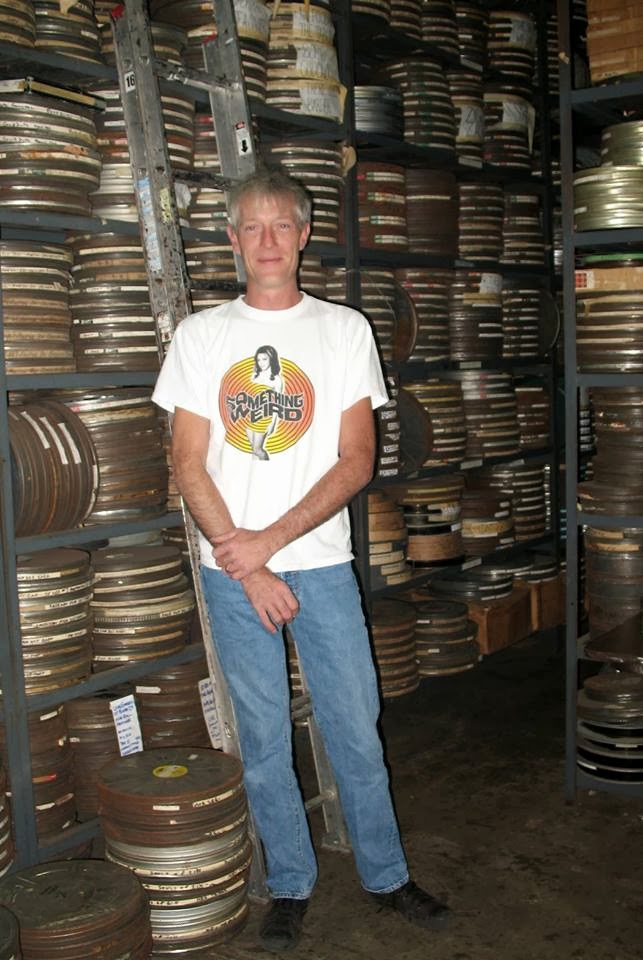 I didn't know Mike well and, to be perfectly honest, our relationship was not always smooth. In the early years of VIDEO WATCHDOG, he literally overwhelmed me with product and he complained when our coverage didn't reflect this - it didn't matter to him that I had a responsibility to be fair and balanced to all our suppliers. In retrospect, I understand his intentions perfectly; he was fighting for his babies, and what he was sending out was all interesting stuff. It all deserved coverage, and I could have easily devoted an entire magazine to the wonders he was uncovering. I remember asking Mike why he kept releasing stuff in such volume, which made it impossible to keep up with; he told me that a lot of people advised him to hold some things back for a rainy day, but (he said, in that smooth and self-amused voice of his) "I figure, no... just put it all out there now" - his feeling being that he was offering a variety of things and they all had their corners of fandom to satisfy, that every title he was putting out might be somebody's holy grail and he didn't see the sense in making anyone wait for it. Their money was in hand now. Looking back, I can't say for sure that he was wrong.

The only time we met was at the 1994 Chiller Theater convention. Our in-person rapport turned out to be even more comically awkward than our long distance one - we kept bumping into each other at inconvenient moments and had a knack for saying things to each other that got misinterpreted. But whenever Mike unearthed something radically wonderful or unsuspected, I always got on the phone right away to let him know it was appreciated or, in later years - after he decided to hang back and manage his son's punk rock band - fired off an email to him via Lisa. Likewise, when he assembled that singularly wonderful, combination art object-grab bag-Halloween history lesson called MONSTERS CRASH THE PAJAMA PARTY SPOOK SHOW SPECTACULAR, we devoted a feature article and interview (written by Bill Cooke) praising it in VIDEO WATCHDOG #81. That piece seemed to smooth over all the little bumps Mike and I had over the previous years on our shared highway. I remember him telling me what a kick he got out of certain provocative things he'd said that I'd left in (like his reference to "some joker at Disney," which he said some other editors might have cut). And he was particularly pleased that we had opened the interview by showing him surrounded by cans of film. "Because that's what it's all about, those reels of film," he said. "People forget that."

But they shouldn't, and people would also do well to remember Mike Vraney, a true home video pioneer who used his homegrown business to make a real and measurable global difference in the world of cinema. Thanks to him, movie reviewers, critics and historians have much more to explore, process and write about those worlds we almost lost, and the rest of us have an almost inexhaustible wealth of twisted cinema to enjoy.
Posted by Tim Lucas at Wednesday, January 29, 2014