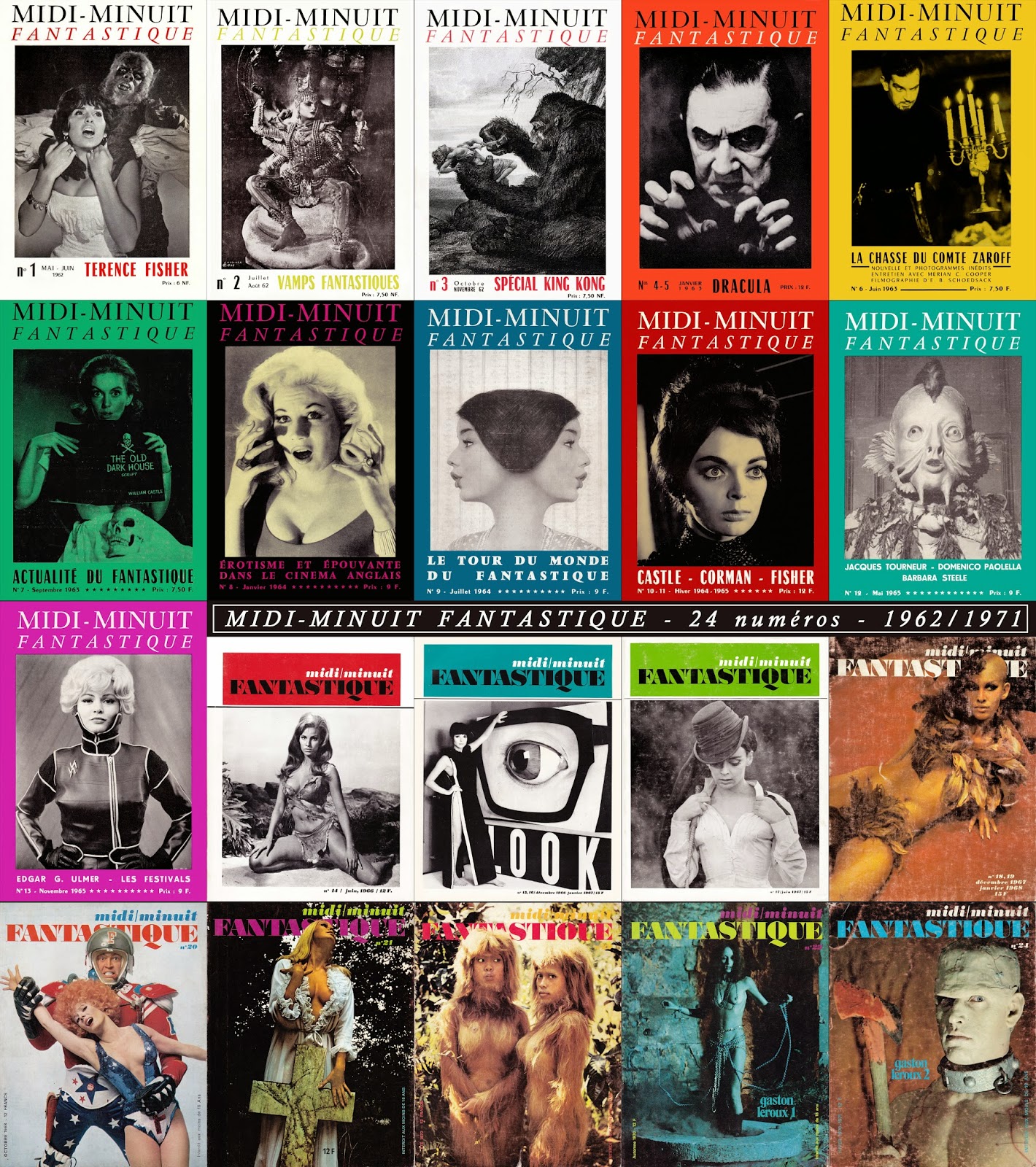 There they are, the twenty-four issues that redefined what genre film journalism and criticism could and should be. The first eleven issues were digest-sized, printed on pulp paper, and as thick as paperback books; the remaining numbers were full-sized magazines printed on firm, non-glossy stock. It lasted only nine years, but MIDI-MINUIT FANTASTIQUE existed to celebrate the dark beauty of the horror and fantasy genres, to draw attention to experimental and independent cinema, the literature that provoked such images, their fetishism, their eroticism. It was not a monster magazine rife with jokes and clubhouse fun; it was a magazine for adults, for connoisseurs. It celebrated mystery, surrealism, the bizarre, the brazen beauty of the strange. Their eighth issue, in fact, became a cause de scandale - a celebration of "Eroticism and Fear in the British Cinema" that featured a portfolio of never-before-published nude images from the so-called "continental versions" of various British horror films, which led to the issue being banned by many newsstands. They presented the first in-depth print interviews with the likes of Terence Fisher, Jacques Tourneur, Roger Corman and Barbara Steele, enabling their readership to cross the proscenium of the entertained to see the film business as a reality that they too might enter and change - as one of their readers, Jean Rollin, did, in time to see his work on the cover of their penultimate issue.

MIDI-MINUIT FANTASTIQUE - named for the Midi-Minuit cinema in Paris where films of this sort habitually played - inspired many people outside of France, including people who couldn't speak a word of French, because the magazine was, above all, beautiful. Its carefully selected images were enough to propose a different understanding of its subject. I know for a fact that M-MF (along with Tom Reamy's TRUMPET) inspired Frederick S. Clarke to create CINEFANTASTIQUE, and it certainly inspired me to create VIDEO WATCHDOG. The VCR was my Midi-Minuit cinema. Early this morning, reports began appearing on my Facebook news feed announcing the passing on Monday evening (December 15) of Michel Caen, the creator and editor-in-chief of this life-changing publication. I don't know his age and know nothing of the cause. He and I never met, we never exchanged words, but I hope my work shows his influence. Earlier this year, Rouge Profonde published the first of four projected hardcover volumes that will collect, reprint, update and append the contents of all 24 issues: MIDI-MINUIT FANTASTIQUE: L'INTEGRALE.

My sincere sympathies to M. Caen's wife Geneviève, his family, his friends and collaborators like his M-MF co-editor Jean-Claude Romer, and those who - like me - have shared in his stardust.