Looking Back At, and Looking At, FRANKENSTEIN - 1970 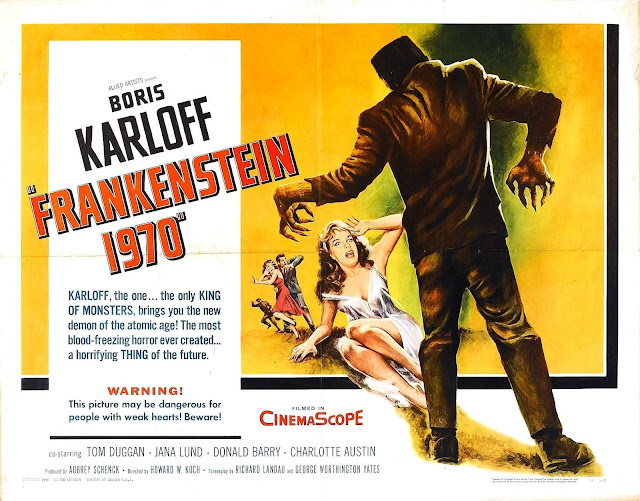 Circa 1963, I was a six or seven year old, newly enamored of what everyone back then called "Monster Books" though they were actually magazines. They contained page after page of horrific yet fascinating images from films I'd never seen and, in most cases, had never heard of - and it was these photos, rather than moving pictures, that acquainted me with the likes of Frankenstein's Monster ("Frankenstein" for short), Dracula, the Wolf Man, and Peter Lorre - who, for some reason, seemed a part of the group. It was sometime during the early part of that year when I happened to hear that FRANKENSTEIN, with Boris Karloff, was going to be that weekend’s matinee at my neighborhood theater, the Plaza. I was living at the time in the care of a single mother with an moderately older son; he was at the age when he didn’t want to be seen hanging around with a younger kid, so my only chance to see this most important of films was to go myself. It took a little convincing because the theater was about a mile away from the house, and involved crossing the street at a dangerous intersection, but I was persistent, probably cried, and finally got permission to go to the movie unattended. It was a different world then.

The admission price was a hefty 75 cents, and I retain the sensation of those three quarters tightly held in my little dimpled fist. When I got to the theater, there was already a long line awaiting the afternoon matinee. I don’t recall seeing any posters displayed, probably because I was so intently focused on the unrehearsed ritual of exchanging my quarters for a ticket, and how quickly that ticket was torn once I was inside the lobby. I followed the others into the theater and grabbed a seat about midway toward the screen, on the left and on the aisle - because, as regular readers of this blog know, I had a history of running out of the theater screaming when I went to see a horror picture.

When the houselights went down, there was a big cheer - the kids there, who were mostly young teenagers and other kids slightly older than me, were that eager to be entertained. If you think about it, their only frame of reference was amusement parks and birthday parties, where the whole idea of entertainment is that you provide half of it with your own enthusiasm. There were a few trailers I don't specifically remember and then the film began - the first film I ever saw by myself.

To my initial disappointment, the film proved not to be FRANKENSTEIN but Howard W. Koch's FRANKENSTEIN - 1970, a film I'd never heard of! Nevertheless, it was going to be my first Frankenstein film and my first exposure to Boris Karloff, so I wasn't about to demand a refund. And I'm glad I didn't because I was not in the least disappointed.


What I remember most indelibly from that fateful afternoon matinee is the fantastically eerie opening sequence from the film within the film; how the audience went ballistic as the monster pursuing the imperiled heroine through ghastly fog hunkered down with his undulating claws - teasing us with the possibility he might hunker low enough for his face to come into frame; the screams of the teenage girls whenever the bandaged monster-in-progress loomed in the darkness; the way the scar-faced and ogreish Karloff (as a descendant of the real-life Dr. Frankenstein) flamboyantly adorned himself with the scarf given by Jana Lund’s character to the newly-dispatched butler Schuter, openly revealing in this stolen bit of affection; and most distinctly, the penetrating quality of Karloff’s radio-schooled voice, tender yet cruel, which wheedled its way behind my hands as I tried in vain to hide my eyes.


Warner Archive recently issued FRANKENSTEIN - 1970 on Blu-ray and the presentation of its black-and-white scope image perfectly complements how I remember its gigantic image on the screen during that childhood matinee. Watching it, I can still hear the happy screams of that mostly teenage audience. I wonder how many of those youngsters are still with us, or if any of them will actually buy Warner Archive's new Blu-ray disc as a souvenir of the fun it once gave them in the dark. But I remember, and this cherished memory of mine seems a vital, vanished link to the film’s actual prowess, because its reputation has never been very hot among a younger group of people who grew up watching a badly-cropped and commercially-interrupted presentation on television. This was one of those films from the late Fifties made in scope to entice people to theaters for an experience they couldn’t get on television, yet it was quickly retired there with only half of its available image. This is the hobbled way in which the film survived for approximately 50 years, at which point the widescreen version suddenly popped up on cable broadcasts.

Revisiting the film helped me to discover an aspect I hadn’t grasped as a child: namely, that Karloff’s character suggests to his confidant Wilhelm (SHE DEMONS' Rudolph Anders) that his body was defiled by wartime tortures, strongly implying that he was not only facially disfigured but also emasculated. With this adult detail in mind, his attempts to create life in the form of his remembered self (using a mixture of actual and synthetic flesh, of his own devise) can be seen as his attempt to reassert his masculinity, his virility, with worthiness of the sexy young women visiting his castle as members of the film crew. Throughout the film, we see that Karloff is deeply drawn to the blonde young actress played by Jana Lund, who can’t help recoiling at the sight of him; we feel his rejection, his offense, and his aforementioned sadistic flaunting of the scarf she gave to Schuter (Norbert Schiller) as a gift, which he wraps around his neck like a stolen caress. This monstrous surface, parading behind a mask of courtly courtesy, is too complex a creation to be passed off as ham - the word that critics of this film tend to use in reference to Karloff’s deliberately overbearing, over-compensating performance. The film's finale, often written-off as a fizzle, actually has some poignancy if we're attuned to this aspect of the doctor's mad dream.
The disc includes an audio commentary featuring affable film historians Tom Weaver and Bob Burns, along with surviving cast member Charlotte Austin, who plays the acerbic script girl Judy. The group lodge the familiar complaints against the film - that it's all downhill after the opening sequence, that Karloff’s performance is ham sliced thick - but it’s clear that Burns and Weaver have a nostalgic love for it anyway. It’s a fun listen, and Weaver comes to the session equipped with loads of production details and cast information. We find out when it was shot and on which leftover sets, and it's pointed out that the film shows the influence of Hammer's recent THE CURSE OF FRANKENSTEIN (1957) is terms of Karloff handling, palpating, dropping, and divesting himself of various organs and body parts in a gristle-grinding disposal unit. Austin, still sounding youthful and sassy, clearly had no high regard for the film when she was making it (she recalls having a drink too many and crashing fellow cast member Tom Duggan's live LA talk show to bad-mouth it), but her recollections of being present during the filming and her fellow cast members are a dear addition. Particularly interesting are the notes on cast member Mike Lane, who plays the monster and hired help at the Frankenstein castle. He’d previously appeared as a boxer in THE HARDER THEY FALL with Humphrey Bogart (whose last picture it was) and got better critical notices than anyone else in the picture. For some reason, the kudos did him no good as he went immediately into this picture, some Italian sword and sandal fare, and still other Frankenstein roles.

While not on the level of the finest Frankenstein films, FRANKENSTEIN - 1970 is nevertheless a better than average horror film of the "I Was a Teenage..." period and the repository for what I consider one of Karloff's most underrated and admirably modulated performances. It is particularly worth seeing now with its super-crisp representation of Carl E. Guthrie's black-and-white scope cinematography. Guthrie's name is not as well known as some, but his credits include William Castle's MACABRE and HOUSE ON HAUNTED HILL, John Cromwell's CAGED, and a stint as one of the cameramen on the black-and-white version of MGM's horror classic DOCTOR X (1932) - the first movie about "synthetic flesh"!