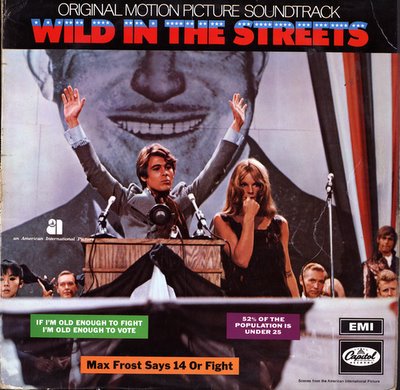 Does anyone else out there find it ironic that, the week Shelley Winters dies, Target unveils the new theme song for their stores and it's "The Shape of Things to Come" from WILD IN THE STREETS?

The baleful song was attributed to "Max Frost and the Troopers" when it was issued on the movie's soundtrack album back in 1968. In fact, it was performed by vocalist Paul Wybier and a pretty cool backing band that's rumored to be either Davie Allan and the Arrows or the West Coast Pop Art Experimental Band. Wybier's vocal was recorded so carelessly that the issued take has a king-sized faux pas in it: during the line "revolution coming in like a fresh new breeze," he stumbles over the first word and it comes out "resrolution." The kids bought it anyway, like it was a Kool-Aid flavor about to be pulled from the market, and it peaked at #22 on the US BILLBOARD charts. I bought the single myself, as an enterprising 12 year-old.

Written by Barry Mann and Cynthia Weill, who were also cranking out hits for The Monkees around this time, "The Shape of Things to Come" was originally heard in and written for WILD IN THE STREETS, a 1968 shocker starring Christopher Jones, Richard Pryor, and Diane Varsi -- one of American International's more frightening and outspoken movies. It was the brainchild of Robert Thom, who subsequently retreated into milder material -- like THE WITCH WHO CAME FROM THE SEA (1976), which starred his wife Millie Perkins as a demented barmaid who goes around castrating football players.

Jones played Max Frost, a pony-tailed (like our forefathers -- dig?) rock star who uses his considerable pull with the Baby Boomer generation to lower the voting age to 18... and then to 14... while sending all the untrustworthy old fogies over 30 being sent to concentration camps where they are strung out on LSD. One of the first people President Max sends to camp is his mother, played by... you guessed it... Shelley Winters, in a performance whose Oedipal overtones surely paved the way for her star turn in Roger Corman's BLOODY MAMA (1970).

It never ceases to amaze me how Madison Avenue has managed to convert most of the great revolutionary songs of the Sixties into sell-out anthems: The Beatles' "Revolution", Jefferson Airplane's "Volunteers", and now this -- Target stores resurrecting (resrurrecting?) Max Frost as their corporate spokesperson. (I can almost hear him saying, "Give me the sales... give me the stuff... GIVE ME... THE POWER!!!!") Yessiree, it's only a matter of time before we hear David Peel's "Have a Marijuana" used to sell Chevrolets or The Fugs for McDonalds. Say what you will about Yoko Ono: I don't think "Working Class Hero" is going to be heard anytime soon in a Mutual of Omaha spot, or during a feel-good basketball montage in the next Billy Crystal movie.

Since the world has gone this much crazier, I should seize this opportunity to remind people that the frigging essential WILD IN THE STREETS is out on DVD, as half of an MGM "Midnite Movies" double feature with Roger Corman's GAS-S-S-S-S! (1970), a revolutionary picture in its own way.

Hey, they may even sell it at Target.

Pick up a copy today -- especially if you happen to be on Target's Board of Directors. Get to know your spokesperson. It may make you think twice about what's in your water cooler.
Posted by Tim Lucas at Thursday, January 19, 2006