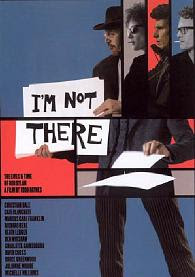 Those of you who have seen the trailer for Todd Haynes' forthcoming experimental biopic about Bob Dylan, I'M NOT THERE, on YouTube may have been struck -- as I was -- by its musical accompaniment. Though I've been reading a lot about Dylan these past months, and immersing myself in his albums as I read, I was unfamiliar with the fragment, which I found immediately absorbing and haunting. I took lyrics from the song to BobDylan.com's lyric search and drew a blank. The reason for this is simple: the song, which is called "I'm Not There (1956)", has never been commercially released.

It belongs to that mysterious group of 1967 recordings known as "The Basement Tapes," and it was not included among the songs found in Columbia's legitimate release of the alleged cream of the crop. The trailer includes only a 1:58 snippet of the entire piece, which runs 5:08; it's been rerecorded by Sonic Youth for the movie but, as the trailer seems to insist, the original version must be heard.

It's been awhile since a song got its hooks so deeply into me. I heard "I'm Not There (1956)" for the first time in its entirety yesterday -- I was able to find an mp3 here (scroll down 13 short paragraphs) -- and must have listened to it at least twenty times throughout the day, amazed that a song could communicate its emotion so palpably even though the lyrics (mostly improvised on the spot) hovered between incompletion and incoherence, even taking the time to learn the comparatively simple piece on my bass to try to come to terms with it musically. Here is some of what I found written in various sources about this amazing piece...

From THE OLD, WEIRD AMERICA by Greil Marcus:

"There is nothing like 'I'm Not There' -- called 'I'm Not There, I'm Gone' when Garth Hudson wrote down basement titles, later retitled 'I'm Not There (1956)' -- in the basement recordings, or anywhere else in Bob Dylan's career. It was only recorded once; unlike others of the new basement songs, which Dylan rerecorded or continued to feature on stage thirty years later, it was never sung again.

She fell into conversation with the first fat man she saw.
"What do you do?," he said, fitting two potato chips into his mouth.
I go to parties and only talk to the fat guys, she thought.
Owen was home writing. She thought of it as an act of fidelity to talk only to the unattractive guys.
She started to tell him about her jobs. She was talking on automatic pilot, hardly listening to what she was saying -- instead, she was listening to Dylan. Going through the host's record collection, she'd found a bootleg album that included "I'm Not There," a legendary, never-released, never-completed song from the Basement Tapes sessions -- a song that she'd heard just once, the summer after high school, and that she'd been searching for ever since. It came on while she was talking; it was even more haunting than she remembered.
She touched the fat guy's wrist. "This," she said, "may be the greatest song ever written."

"The woman speaking is the heroine of a 1991 novel by Brian Morton called THE DYLANIST, and it's a wonderful thing she says -- because so many people have responded the same way, at the same time realizing that 'I'm Not There' is barely written at all.... The song is a trance, a waking dream, a whirlpool... Words are floated together in a dyslexia that is music itself -- a dyslexia that seems meant to prove the claims of music over words, to see just how little words can do... In the last lines of the song, the most plainly sung, the most painful, so bereft that after the song's five minutes, five minutes that seem like no measurable time, you no longer believe that anything so strong can be said in words."

From composer Michael Pisaro:
"It's almost as though he has discovered a language or, better, has heard of a language: heard about some of its vocabulary, its grammar and its sounds, and before he can comprehend it, starts using this set of unformed tools to narrate the most important event of his life... [Rick] Danko plays [bass] as if he knows that all his life this song has been waiting for him to complete it, and that he will be given only one chance."

From BOB DYLAN: PERFORMING ARTIST 1960-1973 by Paul Williams:
"What's astonishing here is that we can feel with great intensity and specificity what the singer is talking about, even though 80% of the lyrics have not been written yet!... It's as though when Dylan writes, the finished song is not constructed piece by piece as we might imagine, but tuned in; there is an entirety from the first but still out of focus, like the photograph of a fetus, a blur whose identifying characteristics are implicit but not yet visible -- not because they're obscured but because they haven't yet taken shape. 'I'm Not There' is a performance complete in feeling -- 'Dylan's saddest song,' says [THE TELEGRAPH editor John] Bauldie -- achieved without benefit of context or detail. It's like listening to the inspiration before the song is wrapped around it."

With this kind of press, I'm surprised that this forty year old piece isn't better known to the public at large. People talk about the Basement Tapes at length, but this particular song is surely, on its own, to Bob Dylan what SMILE was, for decades, to Brian Wilson. As much as I love what Wilson did when he resurrected SMILE as a solo recording, its availability has taken away from the almost sacred mystery that enveloped the original Beach Boys recordings so painstakingly produced by Wilson, which fans loved to collect, share, and arrange into their own personal visions of what the unfinished album might have been. "I'm Not There (1956)" -- whose attached date is only one of many unexplained mysteries about it -- is of such similar appeal that I'm surprised that Dylan fans aren't out there writing and sharing their own lyrics to complete the jigsaw... but, who knows, maybe they do.

One of the many uncanny things about this piece is that Dylan must have known what he had, but he had the awareness of his own craft to know, despite the incompletion of the piece, that this singular recording had somehow miraculously achieved everything that any completed version possibly could and was wise enough to leave it alone. Its rough-hewn quality also invests it with something that no finished song ever has. In its own way, "I'm Not There" is perfect and there's no need for Dylan to touch it again. It might tempt him to finish it.

It's interesting that Todd Haynes chose this obscure song as the title piece for his film, but it does represent in some ways Dylan's own mercurial, artfully dodging persona, which I take to be one of the film's primary concerns, as it supposedly casts seven different actors as Bob Dylan at different phases of his career. My feeling about Haynes' previous work is that it's always very enticing but somehow always falls short of satisfying me completely. The idea to cast different actors as Dylan is an inspired one, one that qualifies this film as fantastic cinema sight unseen, but I'm looking forward to I'M NOT THERE with equal parts eagerness and trepidation. There is a preview scene from the film on YouTube featuring Cate Blanchett as Dylan, who strikes me in this snippet as playing Patti Smith in Dylan drag. Even so, the casting is inspired and it looks like a film that has winks to offer as well as wisdom. If it only brings this song within reach of more appreciative ears, the effort will have been worth it.

I'm hoping it turns out to be the superhero film of the year.
Posted by Tim Lucas at Wednesday, July 18, 2007