Luís Buñuel Gets You There On Time

My review of Luís Buñuel's THE EXTERMINATING ANGEL and SIMON OF THE DESERT, now available on DVD from Criterion, is part of their April 2009 issue and also appears as a free enticement on their website here.

In other personal news, I was notified yesterday by editor David Barker of Continuum Press' 33 & 1/3 series that my book on Jefferson Airplane's 1968 album CROWN OF CREATION did not make the latest round of cuts, which is now down to 27 finalists. One of these, on Neil Young's TONIGHT'S THE NIGHT, has been proposed by VW's own Sam Umland, I'm pleased to report.

Any rejection is disappointing, but this one especially so. I have now written a cable miniseries, a feature screenplay and a book about Jefferson Airplane and not one of them has been able to "take off." It is also Dr. Barker's second rejection of this completed project, though he offered at the time of its first rejection to consider it as an emergency fill-in title, should another author on their roster encounter problems or fail to meet their deadline. Obviously the state of the economy entered into this decision, but jeez, you would think a finished book about one of the best-selling albums by the group who headlined at Woodstock and Altamont, written by a multi-award-winning critic and biographer, would have counted for something.

So now do I advance into the brave new world of music book publishing, or not? That is the question.
Posted by Tim Lucas at Saturday, March 28, 2009

I'm very surprised and flattered to report that, when David Colton announced the winners of the 7th Annual Rondo Awards last evening in a live Classic Horror Film Boards chat, Video WatchBlog was named Best Blog and I was named Best Writer for the second year in a row.

The common wisdom I've been hearing is that I destroyed Video WatchBlog's chances of winning by retiring it while voting was still in progress, so I am moved by this victory in particular. I've received some truly extraordinary letters from readers about this blog, and what it has meant to them; in a long letter I must count as the most touching of them all, David Colton himself gave his reasons why he considered Video WatchBlog to be my "finest hour." It's very testing to read something so heart-felt and uplifting, and to receive an popular vote acknowledgement like this award, and still stick to my guns... but I must. For now, I feel that returning to this discipline, in addition to everything else I'm trying to accomplish, would be more personally damaging than it could possibly be generally helpful. I may have disappeared from daily view and free access, but I'm still producing the best monthly print magazine of its kind (some would say the only monthly print magazine of its kind), enjoying a stimulating new phase of life, and working on (and preparing to work on) some exciting new projects.

We are now preparing to buckle down to an important number of VIDEO WATCHDOG, our 150th issue, and we want to make it something very special. I feel more able to accomplish this goal without the added responsibility of this blog, and I suspect you'll be more avid to read that issue because of what has been withheld from public view in advance.

Thank you all, very much, for your votes and good thoughts.

What follows is the complete press release of the 7th Annual Rondo Hatton Classic Horror Film Awards, with a complete list of recipients in each category. I send my congratulations to all those listed.

ARLINGTON, VA -- Alfred Hitchcock's Psycho, TV's The Munsters and Ray Harryhausen's 7th Voyage of Sinbad were all winners Monday in the Seventh Annual Rondo Hatton Classic Horror Awards, which also honored the man who cared for sci-fi legend Forrest J Ackerman in the final years of his life. But the biggest surprise came when a special "Hitchcock" edition of Barbie, dressed like Tippi Hedren and swarmed by miniature crows from The Birds, topped the Creature from the Black Lagoon in a showdown for Best Model, Toy or Collectible.

Not only did the 50-year-old doll from Mattel beat out the green-scaled Creature, but she outclassed models from The Exorcist, Invasion of the Saucermen and even an action figure of Rondo Hatton himself, the obscure 1940s horror actor who inspired the fan awards. The Rondos are an annual celebration of the vintage monsters who sparked almost a century of horror films and sequels. The worldwide online survey by the Classic Horror Film Board, a 14-year old online community, is the largest in the genre and drew a record 2,932 emailed votes.

Beyond Barbie's latest triumph, winners Monday ranged from the modern -- The Dark Knight was voted best film of 2008, the BBC's Doctor Who was favorite television show -- to classic horrors from the past: -- A new edition of the 1960 film, Psycho, was voted Best Classic Horror DVD. -- A collection of Harryhausen's 1950s science films, including a colorized Earth vs. the Flying Saucers, was named Best DVD Collection, and the collected episodes of The Munsters was the favorite TV collection. -- And a painstaking reconstruction and restortaion of Carl Dreyer's atmospheric 1932 chiller, Vampyr, was voted Best Restoration.

The most emotional moments came when it was announced in an online ceremony that a Los Angeles producer, Joe Moe, had been named "Monster Kid of the Year,'' for his long years serving as a friend and caregiver for horror and science fiction collector Ackerman. The founder of Famous Monsters of Filmland magazine, Ackerman died this year at the age of 92.

"For his quiet, constant and unwavering stewardship of Forrest J Ackerman's final decade of life,'' the Rondo citation reads, "Joe Moe revealed not only the man behind Mr. Monster, but the grace and strength of the ultimate fan. For being there when we all couldn't, Joe Moe is Monster Kid of the Year.'' Moe, contacted by phone during the event, said, "If ever there was a time when I needed my monster family, it's now. Thank you so much for validating the work I tried to do in a fashion that would make all of you proud. I tried not to cry for Forry but now that he's gone, this honor from you, my pals, has me in tears. Thank you so much."

Best DVD Extra: "One for the Fire,'' a documentary about the making of Night of the Living Dead.

Book of the Year: The Twilight Zone by Martin Grams.

Convention of the Year: WonderFest in Louisville.

CD of the Year: Soundtrack of The Blob by Monstrous Movie Music.

Best Horror Comic Book: Hellboy: In the Chapel of Moloch, by Mike Mignola.

Biggest controversy: An L.A. fan's disputed claim he had once examined the long-lost Lon Chaney film, London After Midnight.

Writer of the Year: Tim Lucas, author and editor of Video Watchdog

Artist of the Year: Basil Gogos.

Many of the Rondo winners will receive Rondo busts, sculpted by Kerry Gammill and cast by Tim Lindsey, at the WonderFest convention in Louisville on May 16. Further information, including runners-up and all the nominees, can be found at rondoaward.com.
Posted by Tim Lucas at Tuesday, March 24, 2009 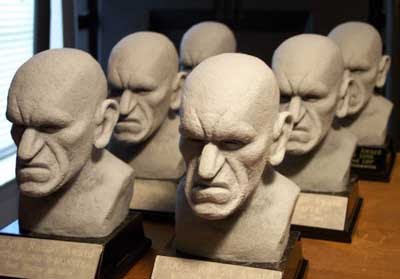 Still haven't voted for your favorites in the 7th Annual Rondo Awards? Better make up your mind, because tomorrow (Saturday) night, March 21, at 12:00 midnight is the deadline! Visit the Rondo Award website for the list of nominees and send your choices to taraco@aol.com-- and remember Donna Lucas, the designer of each and every issue of VW since the Dawn of Time, for Best Artist!
Posted by Tim Lucas at Friday, March 20, 2009 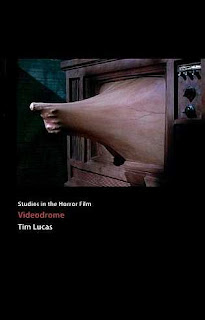 You may remember that my Studies in the Horror Film book on VIDEODROME was originally announced as forthcoming in both trade paperback and signed/numbered limited hardcover editions. Some of you have expressed a special interest in acquiring the hardcover, which did not materialize at the same time as the softcover, and a few of you may have even been holding out in favor of it. So I'm happy to be able to pass along the news that the hardcover edition is now in house at Millipede Press and available for purchase. Collectors should note this is the author's first-ever signed/numbered limited edition -- if you don't count a 20-copy signed/numbered edition of an illustrated prose poem called "Amelia Earhart" that I Kinko'd for a select group of friends back in the mid-1970s, and I don't think we should. Long live the VIDEODROME ordering page, which you can find here.
Posted by Tim Lucas at Wednesday, March 18, 2009

At Donna's suggestion, I am going to reactivate Video WatchBlog -- but not to become what it was before. Because VIDEO WATCHDOG remains our bread and butter, we need a place to make timely announcements to our readers, and this is the most convenient and sensible place to do that. So, while I will not be posting additional articles or essays here, I will pop back from time to time to advise you of special offers, personal appearances and such.