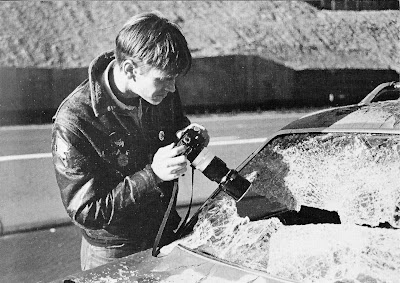 Bill Moseley in the unreleased film NIGHTMARE ANGEL, Zoe Bertoff's 1980s adaptation of J.G. Ballard's CRASH.
Brett Taylor, who contributes regularly to VW's "Biblio Watchdog" department, sent the above photo with the following letter after the posting of my J.G. Ballard post-mortem:
This fairly mundane still is all I was able to dig up on NIGHTMARE ANGEL, an adaptation of [J.G. Ballard's] CRASH from about 1984. I got it from the director, Zoe Beloff, who was just out of film school at the time. Bill Moseley says it's better than the Cronenberg version, but he would, wouldn't he? It was shot in industrial areas of New Jersey. I think there's some loophole about adaptations where you can do them so long as they're not shown for commercial purposes. I remember Stephen King saying he allowed anybody to film his stories as long as they pay a token fee of $1. So there've been many short films of his stories that have never been widely shown.
I've sat on this still for years. It was supposed to go with my Bill Moseley interview, but then PSYCHOTRONIC went under. I kept hoping they'd come back on the Internet, but after a few years I gave up on that notion. Then I had the vague notion of writing an article on unreleased films, but didn't think the world needed another "Day the Clown Cried" article. Now my interview is several years out of date, and I don't have any particular use for this shot. So I thought you might be interested in it.
I certainly am, and I thought other visitors to this blog would also be fascinated. Now how does one see NIGHTMARE ANGEL, a film I'd never heard of before, and which I don't recall being mentioned in Iain Sinclair's book on the book and film? Purely for non-commercial purposes, of course.
Thanks to Brett for sharing this interesting discovery.
Posted by Tim Lucas at Friday, April 24, 2009

Ballard Gone: World at Half Mast 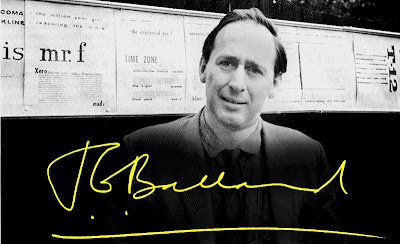 Yesterday I would have described James Graham Ballard as our greatest living novelist; today, following his death from prostate cancer at the age of 78, I would still categorize him as arguably the most progressive thinker and commentator of our time. He found the beauty in places where beauty did not exist prior to his discovery: in desolation, in anomie, in medical language, in injury, in emotionless sex, in catastrophe, in sterility, in those places where hard corners open into infinite cold, where the imagination turns against itself. In some ways, I feel we continue to live in the 20th century precisely because most of us cannot follow Ballard's writing into the 21st century as it truly is. I consider CRASH the finest piece of writing I've ever read, and it (along with THE ATROCITY EXHIBITION) surely influenced the writing of my own novel THROAT SPROCKETS; CRASH taught me, more than all of Flaubert, more than all of Nabokov, the value of the mot juste, the perfectly crafted sentence and the value of transgression. Ballard himself observed that the book's cult success was not immediate, that it was initially accepted only by "a few psychopaths and amputees."

Somewhere in my archives I have a cassette of an early 1980s interview I conducted with David Cronenberg, during which I asked if he had ever read CRASH, which I expected he would like as it consolidated his obsessions with mutation and cars. He hadn't, but he promised he would. The film he eventually based on Ballard's book had its good points, but is not half so important or daring as the novel; likewise, Steven Spielberg's ambitious but overblown film of EMPIRE OF THE SUN. Jonathan Weiss's film of THE ATROCITY EXHIBITION comes much closer to the mark, making what was oblique and implicit in the original work more explicit while remaining true to its essential spirit and vocabulary.

One of Ballard's typically inspired book titles was A USER'S GUIDE TO THE MILLENNIUM. I feel this title would have been more accurately stamped on the cover of J.G. BALLARD QUOTES, a compendium of quotations from his interviews and fiction assembled by V. Vale and Mike Ryan for ReSearch Publications. I'd call it the perfect bedside book, if it didn't have the most extraordinary capacity to ignite the imagination and keep one up all hours, looking at all and sundry through Ballard's uniquely pitched spectacles. For example, he called Madonna's chromium-plated coffee table book SEX "a Commonplace book for our day, by the Daisy Ashford of the 1990s, as filled with homilies and naive dreams as the diary of any Victorian young lady." He included The Los Angeles Yellow Pages, as well as Burroughs' NAKED LUNCH, on his list of 10 Best Books. Yet he was more than a mere provocateur; these seeming provocations are actually laced with almost perilous insight and keen perspective. He had vision and the courage to use it, the capacity to look at the world around us with the poised disengagement of an art critic. Some called this perspective psychotic; I would call it Godly and the spectacle itself psychotic.

In RUSHING TO PARADISE, Ballard wrote "Contrary to general belief, no one's death diminishes us." Ballard's death enriches us by completing one of the most valuable shelves of literature in English.
Posted by Tim Lucas at Monday, April 20, 2009 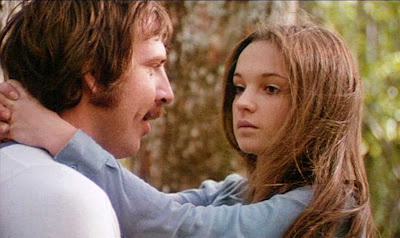 Christina Lindberg in a frisky clinch with Janne Carlsson in EXPOSED.
My review of the Christina Lindberg epic EXPOSED (Exponerad, a.k.a. THE DEPRAVED), now available from the great folks at Synapse Films, appears in the May 2009 issue of SIGHT & SOUND... and also on the S&S website here. This issue should be of especial interest to VIDEO WATCHDOG readers, as it includes Kim Newman's review of the must-see LET THE RIGHT ONE IN, Mark Kermode's survey of recent vampire cinema, and another piece by Kim about "The New Horror" and what it may be lacking.
Posted by Tim Lucas at Sunday, April 19, 2009 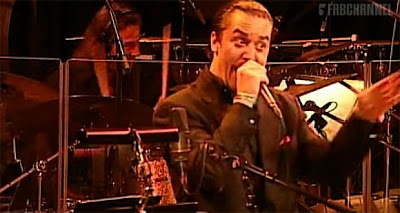 All fans of Eurocult cinema owe it to themselves to check out this YouTube clip of Mike Patton's Mondo Cane performing Ennio Morricone's "Deep Deep Down," the love theme from Mario Bava's DANGER: DIABOLIK. I've always liked the song, with its Christy vocal, without giving it too much thought -- it's not even my favorite musical cue in the picture -- but seeing it performed live by such an expressive vocalist, a full choir and orchestra brought tears to my eyes.
God bless them, every one.
It's like seeing an entire city rise up in tribute to Mario Bava, Ennio Morricone, Marisa Mell and John Phillip Law. It's like seeing a modest film made forty years ago by humble artisans, shrugged off by most people at the time of its original release, triumphing over time by spreading the wings of a glorious phoenix.

I sent a link to Lamberto Bava, who turned 65 years old this week -- the age at which his father died in 1980. I wish Lamberto a much longer run.
Mille grazie to my friend Rod Barnett for alerting me to this.
Posted by Tim Lucas at Saturday, April 04, 2009