THE SHE BEAST in S&S

I review Michael Reeves' directorial debut THE SHE BEAST (Dark Sky Films) in the current June 2009 issue of SIGHT & SOUND, also readable at their website here.
Posted by Tim Lucas at Wednesday, May 27, 2009

Email ThisBlogThis!Share to TwitterShare to FacebookShare to Pinterest
Labels: Barbara Steele, Michael Reeves, The She Beast 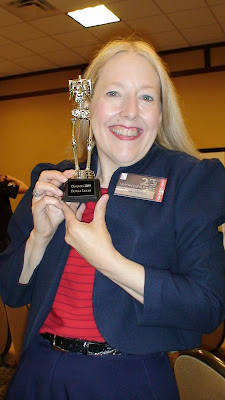 At the very end of last Saturday's Rondo Hatton Classic Horror Award ceremony at WonderFest, David J. Schow -- the Brown Jenkin of Horror Fandom -- once again disrupted the proceedings to present his own awards. Rondo founder David Colton, who two years ago was recognized with Schow's "Nondo" Award, was this year presented with the "Coltondo" Award, while VIDEO WATCHDOG publisher/art director/shipper/receiver/receptionist/heart and soul Donna Lucas was feted with the "Donndo" Award. Schow explained the award by saying that Donna was required to share all of her Rondo Awards for Best Magazine with me, while I was winning Rondos independently of her.

My camera was running low on battery juice by the time this surprise event came about, so I missed David's introduction, but as Donna took the stage to receive her much-deserved solo recognition, I said "Damn the torpedoes" and recorded her short but ever-so-charming acceptance speech. You can see it on YouTube, here.
Posted by Tim Lucas at Friday, May 22, 2009 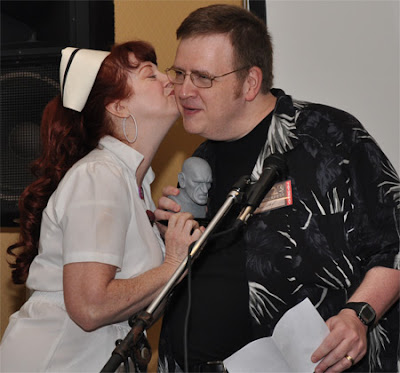 Your erratic blogger receives not only the Best Blog Rondo but a red-hot smoocheroonie from Nurse Moan-eek. Photo (c) and courtesy of Eileen Colton, CHFB News.
This year's WonderFest played host to David Colton's presentation of the 2008 Rondo Hatton Classic Horror Awards, where I was honored to receive the awards for Best Writer and Best Blog (Video WatchBlog, natch). Jennifer Sorrels has kindly posted camcorded footage of much of the ceremony at YouTube, including footage of my two pre-scripted acceptance speeches, which you can see and hear by following these links... 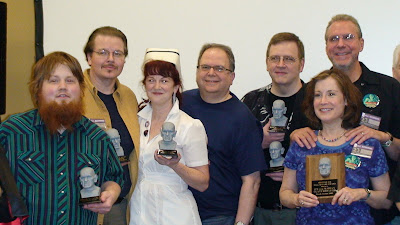 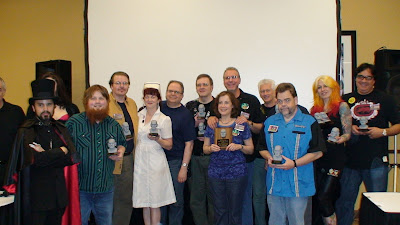 More camcorded Rondo clips and terrific WonderFest photos by Eileen Colton can be enjoyed at this thread on the Classic Horror Film Boards. I would especially recommend Coffin Ray's "Best Article" speech -- as always, a show stealer, and this year augmented by Sara Lattis' hilarious deadpan translations.
Posted by Tim Lucas at Friday, May 22, 2009

Back To THE LOST SKELETON RETURNS AGAIN 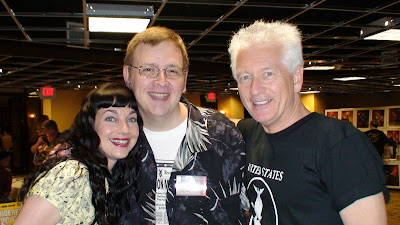 One of the great pleasures of attending this year's WonderFest was getting to know better writer-director-actor-author-cartoonist-aw-c'mon-I'm-tired Larry Blamire and his lovely wife, actress and STICKY MAE GREY author Jennifer "Animala" Blaire, and I should know better. (Sorry, but I am easily infected by Blamirisms. I should be back to Normal sometime later this week... that is, if I go anywhere near Illinois.) This picture shows me with both sides of the equation AND their better halves, under the extraordinarily powerful lighting at Louisville's Crowne Plaza hotel, which was strong enough to make my hair photograph orange and Larry's to actually photograph white!!!!

Another great treat was attending the Kentucky premiere of their latest Bantam Street production THE LOST SKELETON RETURNS AGAIN, which was immediately clutched to the collective bosom of the WonderFest crowd -- a disgusting yet heartwarming sight. When this as-yet-without-distribution meisterwerk comes to your town, do what the WonderFesters did and sing the "Fleming" song over the end credits. This moving ritual deserves to catch on like the toast your grandma and grandpa used to throw at the screenings of THE ROCKY HORROR PICTURE SHOW, back before the turn of the century.

I make no bones about it: THE LOST SKELETON RETURNS AGAIN is a prodigal return for Blamire and his gleefully mad repertory company. It manages to improve on the original LOST SKELETON OF CADAVRA in every respect while also making the original more wonderful as the modest starting point for all this divine insanity. Anybody who thinks this guy is merely spoofing bad movies is missing the point. Movie clichés have never been sent up so unmercifully yet lovingly. Also, in my opinion, Blamire is the only genuine Surrealist working in the cinema today. On a scale of 1 to 10, I give it a celery. 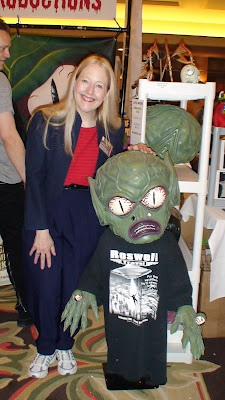 As we all know, monsters are generally very benign critters, such as this Saucer-Man who kindly posed with VIDEO WATCHDOG publisher Donna Lucas at WonderFest 2009 in Louisville, Kentucky this past weekend. Saucer-Man pitches in to help at the Ultratumba Productions table on weekends. During the weeks, he works at a nearby restaurant as -- what else? -- a saucier.

Friendliness and good will initially seemed to be the case with this imposing, larger-than-life-sized, 3-D embodiment of Jack Davis' 6 ft. tall Frankenstein Monster, one of the many wondrous trappings of this year's Old Dark Clubhouse constructed by ODCH innkeeper Gary L. Prange. He was perfectly well-mannered during the day, as seen here with THE LOST SKELETON RETURNS AGAIN writer-director-star Larry Blamire... but then, as night fell... 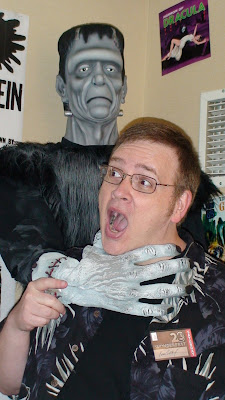 THE MONSTER RAN AMOK! He started by strangling me! 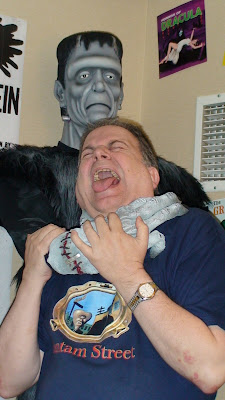 Then he grabbed LOST SKELETON RETURNS AGAIN producer Michael Schlesinger! He attacked so quickly, so lethally, that Schlesinger had literally no time for one last pun! And (imagine this in a Huckleberry Hound voice) that's fast, man! 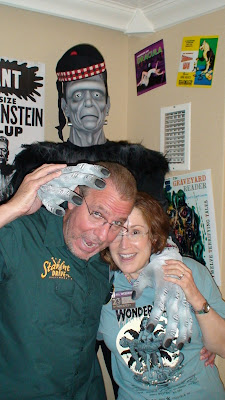 Then he moved on to MONSTERS FROM THE VAULT publishers Jim & Marian Clatterbaugh! He squeezed them together so tightly, their ampersand was no longer necessary! 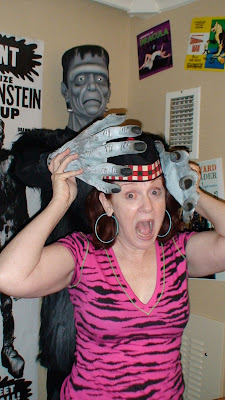 And finally he grabbed Rondo Award-winner Linda "Nurse Moan-eek" Wylie, who tried to get away Scot free, but to no avail! 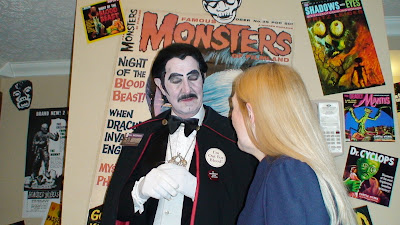 Unfortunately the attacks were not limited to the Frankenstein Monster. Donna later had the misfortune of an encounter with TV horror host Count Gore DeVol, who lured her into a false sense of security with pleasantries and saturdays and sundries until... 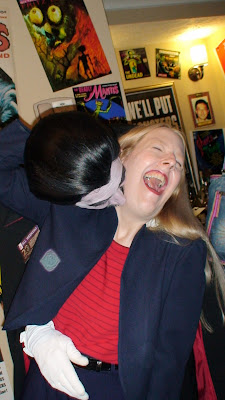 ... he sank his fangs into her neck!
Fangs for the memories to the Rondo Award-winning WonderFest!
Posted by Tim Lucas at Wednesday, May 20, 2009

Email ThisBlogThis!Share to TwitterShare to FacebookShare to Pinterest
Labels: WonderFest 2009

The Long and the Short of I VAMPIRI 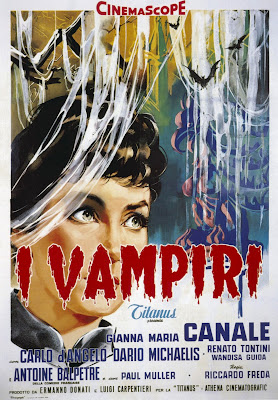 Pursuant to yesterday's post about the new DER VAMPIR VON NOTRE DAME (I VAMPIRI) release from Anolis Entertainment, the company's publicist Ivo Scheloske has sent me links to a pair of richly illustrated German-language web pages that compare the German and Italian versions of the film, and the Italian and US (THE DEVIL'S COMMANDMENT) versions. Danke to Ivo for the links; well worth checking out. The pages also contain Amazon.de links that will take you to where you can order the disc.
Posted by Tim Lucas at Friday, May 08, 2009 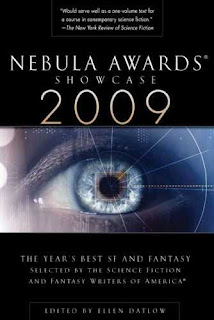 VIDEO WATCHDOG contributor Kim Newman and I are both honored to have work included in the newly published NEBULA AWARDS SHOWCASE 2009 (ROC, $16 US/$20 Canada), edited by Ellen Datlow.

Kim's contribution is an appreciation of author Michael Moorcock, the recipient of the 2009 Damon Knight Grand Master Award. (The book also includes Moorcock's story "The Pleasure Garden of Felipe Sagittarius," from his recent collection THE METATEMPORAL DETECTIVE.) My contribution is an essay about Guillermo del Toro's PAN'S LABYRINTH, the screenplay for which won a Nebula Award.

Kim, widely anthologized, must be used to this sort of thing, but it was a great kick for me to see my name highlighted on the back cover among the likes of Moorcock (a longtime hero), Barry N. Malzberg, Joe R. Lansdale, Jane Yolen, Michael Chabon and the illustrious Kim, among others. I thank Ellen Datlow for inviting me to work in such august company.

Go to your favorite bookstore now and buy it. 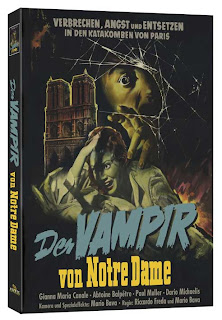 I also want to take a moment to recommend another new arrival. The German DVD company Anolis has followed their deluxe edition of Mario Bava's BLUTIGE SEIDE (BLOOD AND BLACK LACE) with an even more lavish presentation of DER VAMPIRE VON NOTRE DAME (I VAMPIRI). Unlike the domestic Image Entertainment release, which included the Italian version only, Anolis adds on the German version (which runs 4m longer than the Italian version, which was cut to appease the censor board) and also THE DEVIL'S COMMANDMENT, the US version containing additional exploitation footage.

Further sweetening the deal is a delightful, hour-long documentary, C'EST LA VIE, interviewing the great Swiss character actor Paul Muller, now 85 and living on a healthy pension somewhere near Rome. The program covers Muller's early life, early work in theater, and the films that preceded I VAMPIRI, then actually shows Muller reacting to scenes from the film, and wraps up with some generous comments about working with Jess Franco and Soledad Miranda on EUGENIE DE SADE. I am not sure I've ever seen Muller crack a smile onscreen, at least not a genuinely happy one, so it was a great pleasure to discover him to be such a charming, chuckling pixie offscreen. He's a very sharp 85, too, with valuable and unfaded memories of his long career.

Also included are trailers, still and poster galleries, and an interesting attempt to reconstruct the pre-credits sequence originally envisioned by Riccardo Freda, which was changed when he was replaced by Mario Bava in a rescue effort that required a rewriting of the narrative. English subtitles are provided, even for the Muller documentary, but these do not extend to Christian Kessler's German-language audio commentary. I'll be covering this important release in more detail in a future issue of VIDEO WATCHDOG.
Posted by Tim Lucas at Wednesday, May 06, 2009