Here's my monthly link to my NoZone review in the pages of the current SIGHT AND SOUND, which this month is about two films by Philippe Garrel: I CAN NO LONGER HEAR THE GUITAR and EMERGENCY KISSES. Worth knowing about, especially for fans of Nouvelle Vague cinema and fans of the late Velvet Underground chanteuse Nico.
Posted by Tim Lucas at Thursday, June 25, 2009

Waffling About Watchdog, Weight and Woodstock

Sam Umland has written a wonderful response to my previous posting's 20th year announcement at his 60x50 blog. Always thoughtful reading here and I commend it to your attention above and beyond his VW musings, which include an overview of his and wife Becky's long and valued affiliation with the magazine.

We have been receiving numerous calls, even from our printer, inquiring about the status of VW 150. Donna promises to have it to the printer by Monday, so it should be a busy weekend here at Chez Watchdog. Today, with temps pushing to 100° here in Cincinnati, the air conditioner went back into my office window to facilitate speedier and more pleasurable editing of the contents of VW 151.

Also, though I did not mention it on Tuesday (when it would have shared the spotlight with VW's 19th anniversary), Diane Pfister and I finished our screenplay THE WEIGHT OF SALT AND SOUL that same day after four months of steady, intensive and almost exclusive labor. The following day we made some additional changes to the 181-page manuscript and sent it around to our agent and some friendly readers for feedback. Our plan is now to take a week off and decide what we want to do next.

Yesterday I watched four movies in a day (Robbe-Grillet's EDEN AND AFTER, the four-hour director's cut of WOODSTOCK in Blu-ray, JUNO and THE SAILOR FROM GIBRALTAR), which is something I haven't done since... well, since I was who I used to be. I have owned a Grove Press hardcover of Marguerite Duras' novel THE SAILOR FROM GIBRALTAR for close to thirty years and have wanted to see the movie for as long. It was a great disappointment, as I find Tony Richardson's films almost invariably are. I thought the controversial JUNO was refreshing, savvy fun with a commendably subtle edgy subplot (had I been directing, Jason Bateman would have pulled out a copy of THE HEADLESS EYES rather than THE WIZARD OF GORE, though), and EDEN AND AFTER gave such a brilliant slant to the rest of the day that I think watching an art film at 10 or 11 every morning might be just the way to start my day.

WOODSTOCK remains one of my favorite movies, and its non-musical elements are becoming more poignant and fascinating with age. The bottom end of the disc's 5.1 TrueHD mix attests to how dully or just plain badly most of the bassists at Woodstock actually played, but let's hear it for the select few who make the movie's subwoofering bearable and melodic: Bruce Barthol of Country Joe and the Fish, John Entwistle of The Who, Larry Graham of Sly and the Family Stone, and god of all bass gods, Jack Casady of Jefferson Airplane. Speaking of the Airplane, the disc's second disc of supplements includes something else I have waited more than thirty years to see: one of the earliest live performances of the then-not-yet-released "Volunteers," which appeared on the original soundtrack album set but has never been included in any cut of the movie. Legend has it that most of the band got dosed from a water jug before taking the stage at dawn, and by this point in the set, Jorma Kaukonen's guitar playing had become pre-grunge sludge and Marty Balin, clearly tripping his balls off, sings the words with a passion he could still summon when the song was fresh.
Posted by Tim Lucas at Friday, June 19, 2009

Now In Our 20th Year 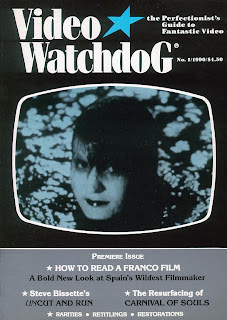 According to Donna, who remembers such things, it was nineteen (19) years ago yesterday -- on June 15, 1990 -- that the first copies of the first issue of VIDEO WATCHDOG were delivered to our home.

We were unhappy with some unfortunate things about VW #1, which was ineptly printed and cut by a Kentucky company evidently unaccustomed to printing anything but business cards. The paper stock was like shirt cardboard and no two copies of the issue were uniform in height; I can remember Donna taking a paper cutter to the tops and bottoms of some copies in a mostly vain attempt to make all the pages in some individual copies the same size. It was a source of personal unhappiness to me that we were so short on photo material that I had to resort to drawings to fill certain gaps. I had won awards for art when I was in school, but it was a muscle I hadn't flexed in awhile and, at least to me, it showed. I do like the drawings I did for Craig Ledbetter's Venezuelan video piece, and The Letterbox (showing the unmistakable hand of Christopher Lee rising from a letter-strewn coffin); in fact, I was so pleased with the Letterbox art that it continued until our 9th issue, at which time I stumbled on our more playful way of introducing each issue's letters department -- which other magazines have sometimes tried to emulate.

But despite its production shortcomings, the issue had an impact (people still talk and write to me about "How To Read a Franco Film") and it launched an award-winning magazine that is now in its twentieth year of business and which, in some ways, has helped to change the face of the industry it writes about.

Better Yet, Read the Book

A couple of nights ago, I watched, for the first time in probably a quarter century, Karel Reisz's 1981 film of THE FRENCH LIEUTENANT'S WOMAN -- one of those movies I find watchable though I don't really like it. However, after seeing it again, in HD no less, four things about it stood out for me as immensely likeable.

The first and most obvious thing is the splendid cinematography of Freddie Francis. The man was an auteur; I can recognize his work at a glance.

Secondly, the delightful presence of one Lynsey Baxter as Ernestina, the betrothed of the Meryl Streep-haunted Jeremy Irons. It's a sad comment on the vagaries of love that Irons stumbles about blind to the charms of this foxy Victorian, who is not only a dead ringer for Deborah Kerr in THE INNOCENTS (also photographed by Francis -- coincidence?) but also deft with a bow and arrow.

Thirdly, the great Leo McKern, whose glass eye is for some reason less noticeable or more believable than usual.

And finally, bravo to Irons for executing what is undoubtedly the most perfectly timed drunkard's fall I have ever seen in a film. Thank goodness someone has posted the entire movie in segments on YouTube, so I can direct you to this portion and timecode 1:30. I never tire of watching this.
Posted by Tim Lucas at Sunday, June 14, 2009

When I miss it most is when I need to write something else on deadline, like my column for SIGHT & SOUND, and I realize halfway through the first paragraph (or sentence!) that my journalistic/criticism muscle has gone flabby from underuse. If this blog was ever good for anything other than entertaining you, it was for keeping this muscle in shape, and I'd like to get it back.

In case you're wondering what I've been doing... At the end of January, my path fortuitously recrossed with that of Diane Pfister, an old friend from my high school art class, after a gap of 35 years. Diane is a successful fine artist who lived and taught in London for twenty-five years before relocating with her husband and daughter to Connecticut two years ago. (You can visit her website and see some of her paintings here.) She and I began an enthusiastic correspondence, sharing ideas and comparing notes on life and art. One month into our letter-writing, Diane surprised me by admitting that she'd had experience in London in the late 1980s as an assistant director on various features and television series (including Jim Henson's THE STORYTELLER), during which time she had also written a screenplay. Naturally, I asked to read it. THE WEIGHT OF SALT AND SOUL, as it's called, turned out to be a rough diamond; its presentation was raw and it was actually unfinished, but its rich cast of characters and profound story -- an historical fish-out-of-water saga about a lone Native American and the well-meaning people who come to his aid -- were so impressive that I proposed helping her develop it into something saleable.

It was two days after receiving her script, on February 26, that I wrote the eight-line poem "845" that signalled my adieu to this blog. I knew I was getting involved in a big project, and that it has been.

Since March, Diane and I have developed her original 95-page acorn into a 190+ page oak that has since been pruned down to 175 pages, though it still lingers perhaps 10-15 pages shy of completion. We will be keeping the longest draft on file as insurance in case a cable miniseries should become its ultimate port, but we would prefer it to become a feature, which may mean losing as many as 50 of its pages. I'm not altogether sure it can be done. SALT AND SOUL is full of life and magic and incident and is easily the most commercial project I've ever been part of. While its drama and comic elements have broad mainstream appeal, it also has magic realist aspects and also some macabre touches. So, for most of this year, my mind has been more or less completely absorbed by this story and our process. I expect to finish the first draft within the coming week; then begins the work of getting feedback on what we've done, determining what if anything else remains to be do, and trying to place it.

Work on this project overtook my ongoing work on the ME AND THE ORGONE script, which is halfway finished though a complete treatment exists and won the approval of the book's original author, Orson Bean, and some other readers. Once I finish with SALT AND SOUL, I will most likely go back and try to finish ORGONE quickly. In the meantime, Diane and I also have another project we are discussing, a story that would initially take shape as a book (fiction or non-fiction, we're not sure; perhaps a combination of both) but eventually become another screenplay. We will see.

So my screenwriting muscle is in pretty good shape these days, but other material needs to be written each month if our bills are going to get paid, so I need to focus on getting my other muscle back as best I can. That muscle is in a different area of my head, and there are days when I miss that old plug-me-in-and-let-'er-rip efficiency.

So it's possible you may be seeing more activity here in times ahead. I still don't want to go back to the article-length entries I used to post here, but surely there's another, more reasonable way to go about this.

In case you are wondering, yes, VIDEO WATCHDOG #150 is running late -- more than a month behind schedule, unfortunately. All of the material is finished, in place, and illustrated, but Donna wants this special issue to include some special sale offers and is working on some new ads. It will be our June-August issue, and I will drop a note here when it is finally sent to our printer. Thank you for your patience, and please spread the word.
Posted by Tim Lucas at Saturday, June 13, 2009