A Word To The Wise

October is fast approaching, which means that VIDEO WATCHDOG's "150th Issue Sale" is rapidly winding down. And what that means is that you can still acquire a copy of MARIO BAVA ALL THE COLORS OF THE DARK at the low price of only $150 -- $100 off the list price -- through what's left of today and tomorrow. After that, on October 1, the price reverts back to $250. And I will sign your Bava book on request. To check out the details of this and many other sale items, click here.
Posted by Tim Lucas at Tuesday, September 29, 2009

Are You a Good Witch or a Bad Witch?

This surprisingly stately clip from Jess Franco's 1972 monster rally DRACULA CONTRA FRANKENSTEIN features Alberto Dalbes as Dr. Seward and Geneviève Robert as Almira, the gypsy woman who comes to his rescue. This scene brings to mind something I've always admired about Franco's, and also Mario Bava's, horror films: unlike American movies, where ugly vestiges of our country's puritan foundation lingers, their films never demonize witches, instead presenting them as serious women of intuition and arcane knowledge, who are often called upon to explain to characters who have chosen a more narrow way of living what is out of balance in their half-understood world, and just as often pointing their way to survival. Geneviève Robert is wonderful in this scene, and one regrets that she didn't make more films. Today, Robert is married to producer-director Ivan Reitman and a Reuters photo of the couple attending the Toronto Film Festival earlier this month can be found here.

Incidentally, Jess Franco and Lina Romay are currently in Austin, Texas, where they are being fêted at FantasticFest with a Lifetime Achievement Award. Here is a schedule of related events and I congratulate Jess and Lina on yet another long overdue recognition of their vast contribution to fantastic cinema. 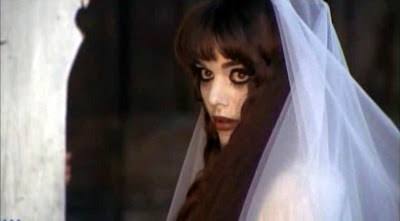 Tina Aumont in THE HOWL (L'URLO), directed by Tinto Brass.

My review of Tinto Brass's THE HOWL (Cult Epics) appears in the new issue of SIGHT & SOUND, but now you can also read it for free on their website here.
I've also just screened Cult Epics' forthcoming disc of the third film in Brass's "Swinging London" trilogy, ATTRACTION (aka NEROSUBIANCO), and am happy to report that it's the Radley Metzger English dub, bearing the silly screen title THE ARTFUL PENETRATION OF BARBARA. Taken from a 16mm print, it's somewhat tightly framed but the most complete version of the film I've ever seen, including a health spa sequence I'd never seen before, and without any of the obscuring animated spirographic overlays that appear in the shorter Italian version to obscure nudity. Joyously free-form, pop- and op-artish, and pushed along by a Greek chorus of baroque rock performances by Freedom (a Procol Harum splinter group), it's my favorite of Brass's films and I feel as though I've now seen it for the first time.
Posted by Tim Lucas at Friday, September 25, 2009 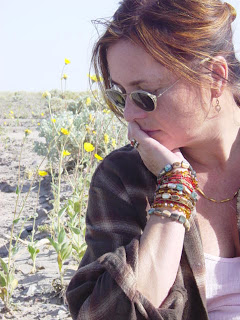 I encourage all Video Watchblog readers to visit the new website of actress/filmmaker Irene Miracle -- best remembered as the female lead in Alan Parker/Oliver Stone's MIDNIGHT EXPRESS, the young heroine of Aldo Lado's THE NIGHT TRAIN MURDERS and certainly as the initial protagonist of Dario Argento's INFERNO.

Irene has recently directed her first short film, DAWNLAND, the poetic 18th century story of a young white girl's adoption by and assimilation into the Native American Abenaki tribe of Vermont, which was chosen to be featured at the recent Selento International Film Festival in Selento, Italy. It's a lovely film with obviously personal associations for its maker, who dedicated the film to her mother and grandmother. She intends DAWNLAND to be the first film in a trilogy of related shorts to be collected under the umbrella title "Champlain Suite," referring to the Lake Champlain setting which all three projected stories share in common.

The website is offering copies of DAWNLAND for sale; there's also a clip there for viewing, as well as a "director's statement" about the project. Irene's fans will also be excited to learn that her website is also making available, for the first time, autographed photos -- including choice shots from INFERNO, some of them in color. (She confessed to me that she had a hard time coming to grips with celebrity, and for many years refused autograph requests because she couldn't understand why her signature should be considered more desirable than anyone else's -- so there aren't many signed pictures of her in circulation... yet.) There's also a fully annotated photo gallery to make a visit well worth your clicks, a stunning assortment of film, stage and rare modelling shots.
Posted by Tim Lucas at Wednesday, September 16, 2009 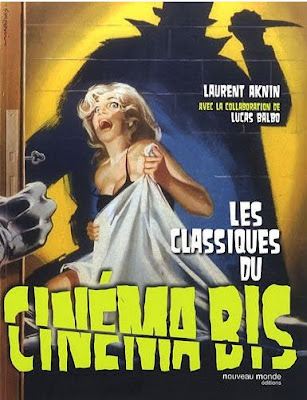 The cover art alone sells it, but LES CLASSIQUES DU CINÉMA BIS (Nouveau Monde Éditions, 27 Euros) -- a new reference guide (in French, of course) to outstanding cult movies released between 1955 and 2007 -- keeps the promise of its outward design for 552 interior pages as well. It's a pleasure to page through, and there are important lessons to be gleaned simply by doing that.
What is "Cinéma Bis"? It is generally accepted to mean "low-budget genre cinema," but it seems to be quite an ornate French pun, at once referring to B-movies (Cinema B's) and the serial nature of much genre cinema (the French word "bis" means "encore"); it may be a lucky accident or inspired design, but there is also something punny going on there with the incorporation of the English word "abyss," evoking the very bottom of the barrel. This book scrutinizes no less than 500 gems of this genus, commencing with Edward D. Wood Jr.'s BRIDE OF THE MONSTER and concluding, appropriately, with Quentin Tarantino & Robert Rodriguez' GRINDHOUSE.
In between, authors Laurent Aknin and Lucas Balbo cover horror, pepla (sword-and-sandal), science fiction, pulp, superhero fantasies, spy thrillers, westerns, krimis, gialli, erotica (including the odd porn title like DEEP THROAT), Bollywood curios and HK actioners. Also included in the generous overview are films by those artists whose names evoke genres unto themselves: Steve Reeves, Jess Franco, Franco & Ciccio, Bruce Lee, John Waters, Laura Gemser, Tinto Brass, Jackie Chan, Weng Weng. Even with 500 titles, the book cannot be all-encompassing, but it does take care to include a fair number of British and American titles from all periods, inviting such diverse names as Bob Clark, Oliver Stone, Andy Milligan, Donald Farmer and Eli Roth to the table.
The text is not superficial; it looks under the skin of the movies under discussion -- describing the scenes and moments which make these selections particularly worth seeing. French release is an impotant consideration in what is covered, but readers will undoubtedly have quibbles about missing titles -- one of mine is Jess Franco's FACELESS, which I consider a bizarre, high gloss culmination of his work, but I cannot say that Franco is under-represented here. I've not read every word, of course, but after numerous perusals, I've noticed only one textual error: a still of Irene Miracle escaping from the rail car in Aldo Lado's THE NIGHT TRAIN MURDERS finds the actress misidentified as her co-star Laura D'Angelo.
At the close of their Introduction, the authors declare their book as (I translate) "a modest tribute to a fundamental work, LES CLASSIQUES DU CINÉMA FANTASTIQUE by Jean-Marie Sabatier (1973)." I own a copy of M. Sabatier's book, an encylopedia of essays devoted to the most important actors and directors of horror and fantasy cinema, and though I can't read much of it, it is one of the books on genre cinema I would never part with; I can only say that Aknin and Balbo have aimed high with their intentions but have struck their target nevertheless. Their book awakens the itch to watch movies almost indiscriminately, for the sheer crazy love of movies, and it closes on a commendably sentimental note with various French ad mattes and a photo of the façade of the legendary Midi-Minuit cinema -- the Ground Zero of French genre film reportage.
The cover art, incidentally, comes from the Italian poster for the British horror film JACK THE RIPPER, painted by the marvelous Sandro Symeoni.
Posted by Tim Lucas at Tuesday, September 08, 2009 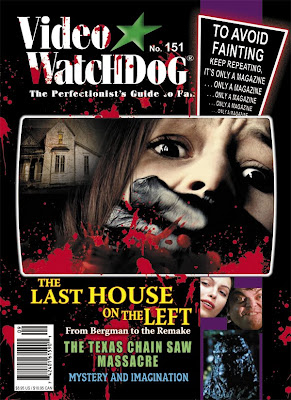 Visit the "Coming Soon" department at the VIDEO WATCHDOG website for full details and a free, four-page preview selection!
Posted by Tim Lucas at Wednesday, September 02, 2009