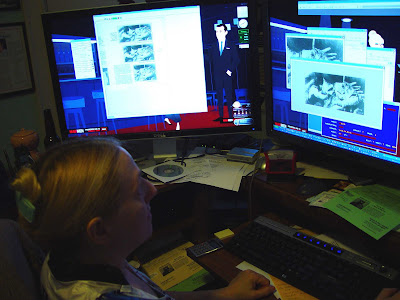 Publisher/art director Donna Lucas restoring the images accompanying a discussion of HERCULES AND THE CAPTIVE WOMEN in VW's first issue.
While VIDEO WATCHDOG magazine has been marking its 20th anniversary, VW publisher Donna Lucas has been quietly engaged in one of the greatest restoration projects in the magazine's decades-long history. No, it's not the ultimate exposé of how CATACLYSM became part of THE NIGHTMARE NEVER ENDS, nor is it a meticulous comparison of five different versions of Jess Franco's LA COMTESSE PERVERSE... it's Donna's own painstaking digital recreation of VIDEO WATCHDOG #1.

When we decided to reprint our premiere issue, Donna's first idea was to scan the contents of a surviving copy and turn it over to our printer. Simple, right? However, the realities proved more complex. First of all, the original paste-up boards used to create the issue -- with PMT (photo mechanical transfer) illustrations affixed with spray adhesive to windows cut into each laserjet-printed page -- were long missing. Secondly, the original print job was so clumsily executed that a straightforward scan yielded typographic results that were somewhere south of acceptable. Fortunately, a thorough search of the attic at Chez Watchdog yielded a box of considerable value, containing not only the original layout boards but also most of the original illustrations and drawings that Donna used to create this landmark issue back in 1990. 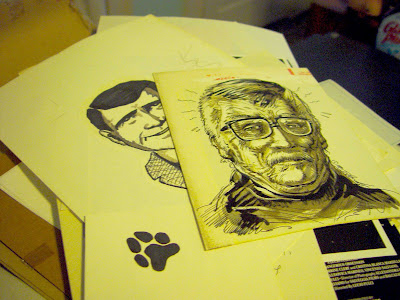 Original artwork by Stephen R. Bissette and yours truly awaits its chance to be rescanned.
The discovery of the original artwork, as well as some photographic material, proved to be a real godsend to this undertaking, as the scanning of the PMT images, whether from a printed copy or from the original PMT's, tended to throw up some nasty moiré patterns. However, by meticulously rescanning each layout page in high definition from the original sheets, and inserting completely fresh digital scans of the issue's stills and original art from the original materials whenever possible, Donna has ensured that the 20th Anniversary edition of VIDEO WATCHDOG #1 will be much more than just a reprint.
"If you were to ask me what percentage of the pictures are now in better quality, I'd have to say 100% of them!" Donna explains. "Even when I didn't have access to the originals, I removed specks and dots and flaws from what I had to work with. Some pictures that were badly cropped in the original, like the center spread from SUCCUBUS, will be seen in this new printing as they were meant to look the first time. Likewise, some pictures that were too dark in the original issue, like some of the shots from CUT AND RUN, have been brightened, so you can now see the actors' expressions and can tell what's going on in them. We are also printing this new edition on paper that's consistent with the way VIDEO WATCHDOG is printed now, so it will be light and flexible in ways the original wasn't."
The text in the issue has not been changed. The only variation that has been made to the issue in terms of content is its back cover. Whereas the original edition showed an image from the Jess Franco film THE AWFUL DR. ORLOF, the reprint edition offers a scan of the same back cover image taken from Donna's and my own personal copy, inscribed to us in gold by Franco and his wife and longtime associate Lina Romay.

"I've always felt that our first issue stood apart from every other issue we did, in terms of quality control -- or the lack of it," Donna says. "When our readers receive this new, improved version of #1, I think they're going to feel like their collection is complete for the first time!"
Orders for the 20th Anniversary edition of VIDEO WATCHDOG #1 (at the printer) are now being accepted here and at our toll-free number, 1-800-275-8395.
Posted by Tim Lucas at Monday, June 28, 2010 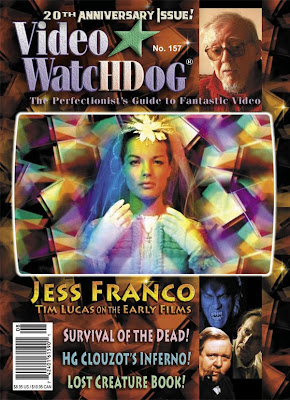 Donna is just now putting the final touches on the inside covers, but the front cover -- an image of Romy Schneider from HENRI-GEORGES CLOUZOT'S INFERNO made still more scintillating by Charlie Largent -- is ready for unveiling!

You may note that this is indeed our 20th anniversary issue and, for the first time in those 20 years, my name is on the cover. Other contributors like Kim Newman and Steve Bissette have had this honor, but this is a first for me, in this country anyway. For those of you who have been clamoring for me to write more for VW, I actually wrote more than half of this issue -- the Franco essay alone is our longest single-piece feature article ever, practically novella-length at 34 pages (advertising free, of course), plus there's three-page "Watchdog Barks" editorial and I also reviewed some films, including CLOUZOT'S INFERNO. So no one can say I didn't give this anniversary issue my best shot.

Also in this issue, David J. Schow performs a post mortem on FEATURES FROM THE BLACK LAGOON, a book that McFarland and Company withdrew from sale slightly more than a month after its publication date. It's our longest book review ever! Plus Kim Newman on SURVIVAL OF THE DEAD, John Charles on some Paul Naschy rarities, and much more. For more details, visit out Coming Soon pages here.
Posted by Tim Lucas at Sunday, June 06, 2010