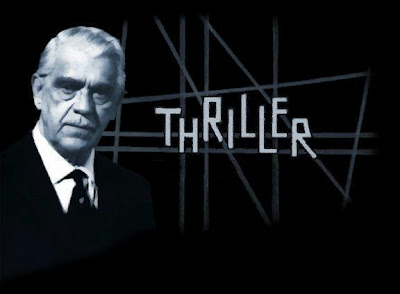 I've been delving into Image Entertainment's forthcoming THRILLER box set ($149.98, streets August 31) in preparation of writing a detailed review. There aren't many audio commentaries on the first two discs, but I recommend Steve Mitchell's interview with director Arthur Hiller on the series pilot "The Twisted Image." It's pretty good -- a little dry, occasionally off-topic, but informative just the same.
Sadly, the Richard Anderson commentary for "The Purple Room" episode of THRILLER (its first Halloween offering and first true horror episode) is an embarrassment.

Moderator Steve Mitchell asks Anderson what it was like to work with Boris Karloff during the filming of the intro sequence, and Anderson tells him... but with the episode digitally restored, it is now painfully obvious that Karloff is acting in front of a rear-screen projection of Anderson and the other cast members! Therefore, they never met -- at least not during the filming of this episode! (As a commentator in this set myself, I can understand how Steve made the mistake in formulating his question because we commentators were recording while viewing reference prints in much poorer condition than is purveyed here. My old TV copy of this episode, too, makes it look like Karloff and the actors were all standing on the same soundstage.)

Furthermore, Anderson recalls thinking "PSYCHO!" when reading the script. Well, PSYCHO was released in June of 1960, and "The Purple Room" aired in late October 1960 and was obviously filmed some time earlier... still, I guess this MIGHT be possible... but when Anderson notes that the episode makes use not only of the PSYCHO house (true) but the PSYCHO interior including the stairs (BONG!), he makes anything else he says for the remainder of the track, well, regrettably suspect. As a speaker, he is one of those people with a talent for saying a lot but with very little actual content.

Late in the episode, Anderson admits to never having seen it. On the positive side, he's quite good in it.
Posted by Tim Lucas at Saturday, August 21, 2010