Where I've Been, Where I'm Going 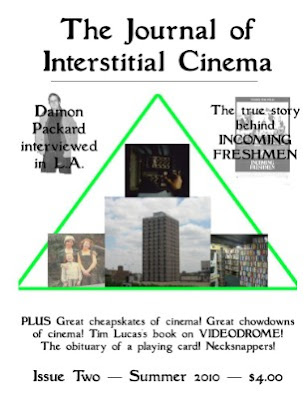 If you're looking to get my attention, putting my name on the cover of your magazine is certainly one way to do it. Yesterday I received the first two issues of THE JOURNAL OF INTERSTITIAL CINEMA, which its editors kindly sent to me, and I was pleasantly surprised to find my Millipede Press book about David Cronenberg's VIDEODROME the subject of an essay/review in the second issue. It's weird to see my own name and work sandwiched between "Great cheapskates of cinema!", "The obituary of a playing card!" and "Necksnappers!," I suppose because nothing seems more mainstream to me than me, but that's the beauty of it.

Published and written by (one assumes, the pseudonymous) Grog Ziklore and RJ Wheatpenny, JOIC celebrates the cinema that falls between the cracks not only of genre but of general notice. The first two issues strike me as an intriguing conglomeration of Steven R. Johnson's DELIRIOUS, Charles Kilgore's ECCO and Bill Landis' SLEAZOID EXPRESS. There's a tabloid element here ("Reel Tragedy," a look at an NYU film student's suicide, appears to be real reportage but reads like a comic item) but the writing is consistently intelligent. It's a pleasure to see people sidestepping the internet to inject some ink back into life and life back into ink.

The three-page VIDEODROME review doesn't mention who published the book, which won't make my publisher too happy, but people will be able to find it anyway. My guess is that RJ Wheatpenny reviewed it because he (I'll assume he's male) is legitimately interested in the subject and author, and not because he was sent a review copy. His cogent assessment of the film and the book concludes with a lengthy paragraph (anyone else would call it a page) about me, personally. I'm called "the father of modern genre film writing" and the Bava book is called "the best book ever devoted to a single filmmaker," which is very flattering, before Wheatpenny goes on to some closing notes on the current oddities of my career arc:

"After its publication [the Bava book] and the 2008 release of his VIDEODROME book, Lucas seems to have transformed in his own way. He still publishes and contributes to VIDEO WATCHDOG but is less of an influence on its tone, and he's ceded the magazine's prime real estate to a varied stable of contributors. His Video WatchBlog... is rarely updated anymore, and he now seems to prefer the instantaneous (and largely uncritical) feedback of constant Facebook updates... Judging from his online posts, he's more enthusiastic about music and script-writing today than the movies on which he's built his reputation, and although he's not abandoned them, he seems as set on a different creative course after his VIDEODROME book as Cronenberg was after releasing his film." (page 20)

Very interesting viewpoint, and not at all untrue. Its inaccuracies, if any, stem from Wheatpenny knowing the public me rather than the personal me. My Facebook page, where I've spent most of my public time this past year or so, is a personal page though it welcomes most everyone who asks to be admitted. Music has always been a passion of mine, equal to if not greater than my love for films, which have been my vocation. My FB wall is a vehicle that lets me express my thoughts about music, for which I have no other outlet, and also to interact with a large number of people. And just as I once used all my free time between issues of VW to work on the Bava book, I'm now working toward establishing a career as a screenwriter, though I don't actually discuss those pursuits much on FB.

Certainly, as RJ speculates, finishing the Bava book and publishing the Cronenberg book did something to formally close a big chapter of my life. From my own viewpoint, finishing the Bava book was like awaking from a nearly lifelong dream, wherein I had actually nourished the point of view that such a marginal obsession would be enough to hold and keep me for a lifetime. Many in my audience seem to think that completing these projects would simply free me up to tackle others -- a book about Jess Franco, for example. But not having these projects, especially the Bava book, to occupy me didn't have that effect; instead, I locked myself into this blog for awhile and continued to give and give and give, without taking anything in to nourish me. And I became aware that there were sides of life, of my own life, that I was not exploring and which were the only ways I could recapture the rush I felt when I was humming my way through a work in progress. So I made myself the work in progress. Swimming, vegetarianism -- I've told this story here before.

Being a published novelist as well, I also determined to redirect my life toward achieving something more as an artist in my own right, rather than writing about other artists. Because spending my life alone at home in front of the computer 24/7 was no longer all I wanted from life, my writing turned to screenwriting. (It's my informed view that neither VW nor my fiction is likely to support me through my old age, so as I near my autumn years, income becomes more of a concern.) I've been seriously screenwriting now for four years; I've written seven different scripts, including multiple drafts of each, and I've optioned two. The people who have read my most recent feature script, an adaptation of Orson Bean's ME AND THE ORGONE, tell me it's the best thing I've ever done. I've yearned for more creative interaction, but I don't like spending long hours writing the best possible version of a story only to see it thoughtlessly fudged by other hands, so my thoughts have had to turn to directing. It's the only way for me to ensure that I'll finally be judged for what I've written, rather than for what was rewritten. I didn't think it was in my personal nature to be a director, but now that I have experienced what one gains by being surrounded by a supportive crew, I've learned otherwise.

In a couple of weeks, I'll be returning to the Factory at the Douglas Education Center in Monessen, PA to direct my own first film work. The subject is an adaptation of my novel THROAT SPROCKETS, which could now be loglined as "MAD MEN meets TRUE BLOOD" though it was begun in 1987 and first published in 1994. When I met Guillermo del Toro at the Saturn Awards in 2008, he told me he considered THROAT SPROCKETS "the perfect MASTERS OF HORROR story." I'll be directing a promotional trailer and a representative dialogue scene from the book, which executive producer Robert Tinnell will then use to attract funding for the full feature, which we hope to shoot sometime next year.

I'm not even going into everything I've gone through in the last couple of years, but even this much disclosure should show that I haven't lost my interest in movies -- on the contrary, that interest has expanded to encompass much more activity, and activity in the truest sense. Meanwhile, VIDEO WATCHDOG continues to come out on schedule, I wrote more than half the contents of our 20th Anniversary issue (#158), and I'm constantly brainstorming new directions the magazine might take to keep it vital and growing as the marketplace continues to undergo radical change. But I thank RJ Wheatpenny for the interest shown by his essay and I recommend those of you on the lookout for a new and unique fanzine to give THE JOURNAL OF INTERSTITIAL CINEMA a try. 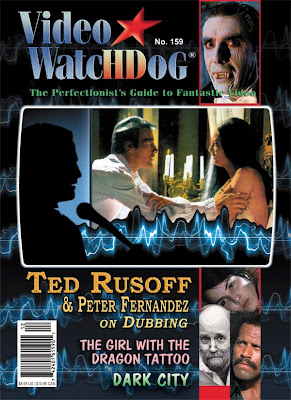 Ever since we began VIDEO WATCHDOG, I've wanted to devote an issue to the art and artists of movie dubbing. Our next issue's interviews with Ted Rusoff and Peter Fernandez finally realize that goal. Interior contents previewed here.
Posted by Tim Lucas at Friday, October 01, 2010