Notes on John Carpenter's THE WARD 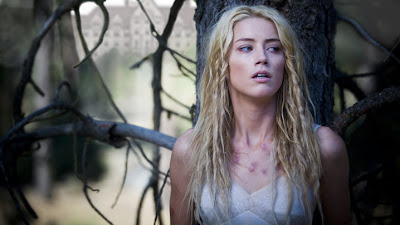 THE WARD, John Carpenter's first feature in a decade (since GHOSTS OF MARS, 2001), carries his name above the title as always, but actually finds him relinquishing much of his usual control. He didn't write this film, nor did he score it, so while it does resort time and again to a familiar bag of tricks (unexpected intrusions in the foreground, periphery of the scope frame or in the depth of field), it does shows him working, admirably, outside his comfort zone and achieving his most invigorating work since 1988's THEY LIVE.

The script by brothers Michael and Shawn Rasmussen attends the commitment of Kristen (Amber Heard) to a mental hospital following her apprehension at the scene of a house she's burned down. Installed in the experimental psych program of Dr. Stringer (MAD MEN's Jared Harris), she is surrounded there by some fairly predictable patient types (Danielle Panabaker as a beautiful scheming narcissist, Mamie Gummer as a plain hostile lesbian, Laura-Leigh as a toy-hugging child-woman, and Lyndsy Fonseca as the first to go), Kristen becomes alert to a vicious ghost (Mika Boorem) haunting her hospital ward. If the script isn't particularly ground-breaking in terms of dialogue or characterization, it keeps the viewer guessing right up to its nicely surprising explanation of events -- which, in a funny way, makes the audience feel as mentally ill as anyone onscreen -- and its traditional approach is a big part of its appeal. The story is set in 1966, when the laws governing the treatment of mental patients were more lax than they are today, making this particular story possible; in keeping with its era, cursing is kept to a minimum and the visual storytelling largely eschews CGI and staccato AVID-style editing to return to what might be called the classic principals of genre technique.

Aside from my unreserved admiration for THE THING (1982), my amusement with THEY LIVE and his sluggishly amiable Hawks pastiche ASSAULT ON PRECINCT 13 (1976), my adamant if inexplicable fascination with PRINCE OF DARKNESS (1987), and my healthy respect for the atmosphere in THE FOG (1980), I've never really bought into Carpenter as a "master of horror." He's always been more of an able technician than an auteur. That said, what horror films have become over the past decade has done a lot to alienate me from the genre, so I found THE WARD consistently entertaining because it plays like a master lesson in how to use today's technological advantages (it was shot digitally, then transfered to three-perf 35mm) hand-in-hand with those tried-and-true techniques which form the very essence of cinematic experience. One could define such techniques as those which distinguish film from television -- or, worse still, films that look and play like television, as has increasingly become the norm. This is not a film about sensation, it's about story-telling. It's not about shocking one's sensibilities, it's about surprising them. It's not about doing most of the job digitally in post, it's about being prepared on the set.

THE WARD is available from Arc Entertainment on DVD and Blu-ray, as well as digital download.