Someone Should Dig Up THE HORRIBLE DR. HICHCOCK 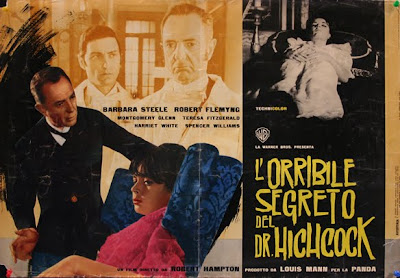 Last night I watched a beautiful copy of Riccardo Freda's L'orribile segreto dal Dott. Hichcock ("The Horrible Secret of Doctor Hichcock," US: THE HORRIBLE DR. HICHCOCK, 1962) which is available as a Cinemageddon download. Though the film is presently available as an authorized Italian DVD release on the Movietime label, it has never had an English-friendly DVD release since its only US appearance as a VHS tape on the Republic Home Video label. Various people within the industry have explained the title's elusiveness to me with reports that its present licensors are demanding an unrealistic amount for it.

Whatever they're asking, I say it's worth it. Freda, of course, launched Italian horror with I vampiri (THE DEVIL'S COMMANDMENT, 1957, co-directed by Mario Bava), and they later collaborated again on Caltiki il mostro immortale (CALTIKI THE IMMORTAL MONSTER, 1959). HICHCOCK -- a deliberate misspelling so as not to step on Alfred's copyrighted and trademarked name and image -- stands as Freda's most defining solo outing in a genre he did not hold particularly dear. Consciously made in the image of a Roger Corman Poe picture, it is like a Poe picture adapted to grand opera, full of romantic swooning, melodramatic flourish and the icy dread of premature burial. But why the film has remained so entrenched in the popular imagination is that it deals, or appears to, with the verboten subject of necrophilia.

While watching HICHCOCK again, for the first time in a truly stellar-looking and complete presentation, I had some realizations about it and began to take notes. Rather than write something new and finished about the picture, I thought I would simply share my thoughts here.
1. The main titles encompass one of the most brilliantly inspired moments in the history of horror cinema. Halfway through the plain text-on-black main titles, they stop and the screen goes black. We think they've ended as we await the fade-in, but then the darkness is pierced by a woman's shriek! We've already been worked to a lather by Roman Vlad's appassionata nero score, so the shriek literally permits the overexcited music to release its tensions. Translation: It's an orgasm. A beat or two after the shriek ends, the main titles resume, as does Vlad's score, now sounding appropriately more subdued. I think it's horror's most brilliant main titles conceit since that fist jumped up to punch through the final glass matte credit in MGM's MAD LOVE (1935). Let's not draw any analogies to the fact that production designer Franco Fumagalli (THE GODFATHER III, THE ENGLISH PATIENT) had his name unfortunately Anglicized to "Frank Smokecocks."

2. "His Lust Was A Candle That Burned Brightest In The Shadow of the Grave!" explained the film's advertising campaign. Dr. Bernard Hichcock (Robert Flemyng) is indeed a necrophile, but as I paid close attention to the story, I realized that he doesn't really have sex with corpses. He fondles and strokes and caresses the bodies of dead women gurneyed through his ward at the University Hospital, but he always takes his stoked desires home to be properly received by his all-too-willing wife, Margaret (Maria Teresa Vianello). Bernard has developed an experimental anaesthetic, Sonneryl, to put Margaret in a more enforcedly passive state prior to their ritualized lovemaking. Unfortunately, Bernard keeps the Sonneryl in a cabinet next to an identical bottle labelled Poison.

3. Overexcited one evening by a particularly voluptuous cadaver that jiggles under the sheet as its gurney goes over a bump on the hospital floor, Bernard races home and overeagerly grabs the wrong bottle -- we think -- and injects his wife, who appears to die as a result. In fact, it later transpires that he simply overdosed her with the dark, frothing liquid (which looks like, and probably was, root beer or something comparable), resulting in a premature burial from which she was rescued by the Hichcocks' cat-stroking housekeeper and enabler, Martha (Harriet White Medin).

3. Martha's character only makes sense if we realize that she harbors lesbian desires of her own for Margaret. (Did I say "cat-stroking"?) She is obviously more devoted to Margaret than to Bernard, whom she always greets with a dutiful weariness bordering on contempt; in the first scene of his homecoming, we first see Martha signalling Margaret of his return, while wearing and projecting a knowing expression about what is impending. We sense her implicit involvement in these secret Victorian revels, but what's in it for her? Perhaps what's in it for her is availing herself of her Master's docile leftovers.

4. When Margaret "dies," Bernard returns to his home after 10 years with a new bride, Cynthia (Barbara Steele). Dialogue reveals that he met her abroad as one of his patients, who was recovering from a traumatic shock. Of course, he was doing likewise and it is inferred that his supposedly mortal error brought about a sudden end to his old habits... but. Screenwriter Ernesto Gastaldi has said that, when this film ran a week behind schedule, Freda covered himself by tearing a 12-page chunk of exposition out of the script that was never filmed. The only hole in the narrative I can find would detail Hichcock's own traumatized response to Margaret's death and his meeting with Cynthia. Gastaldi doesn't remember what failed to go before the cameras, but I'd like to think the missing exposition would show Hichcock struggling to remain immune to the charms of the corpses he saw during his retreat, and then introduce Cynthia as Bernard's patient. It wouldn't be necessary to detail their courtship; all the viewer would need is a scene of Cynthia, high-strung and overwrought, fainting in his consultation room and abandoning her young and conscious form to his covetous clutches. This would be enough to reactive Bernard's suppressed passions and make him want to legalize his possession of her.

5. One senses that Cynthia's marriage to Bernard is rooted in mutual psychological dependency rather than love or passion. Once he brings her back to his home in London and returns to the University Hospital, she soon notes to his colleague Dr. Kurt Lowe (Silvana Tranquilli, an unfortunately dull leading man) that he's become nervous and strange -- meaning the old work-related temptations are rattling him once again. Cynthia nevertheless remains safe with him, only becoming truly endangered after the point when he secures the moment of privacy at the hospital to undrape a woman's corpse and drink in the sight of its nakedness, submissiveness, and pliability.

6. There is a very creepy moment of delirium where Cynthia awakens, paralyzed and revolted, her eyelashes snarling as Raymond Durgnat once said they did, on the bier in Bernard's necrosanctum. She sees him leering near her feet, his face swelling and glowing red -- a remarkable and perhaps unique use of inflatable bladder effects in Italian makeup effects, at least at this moment in time. As bizarre as the scene is, it's greatest stroke of genius may be that it adds (unexplained) a woman's hand, clenched as if in rigor mortis, rising up behind him to drape itself companionably over his shoulder. The lack of explanation makes the moment all the more unsettling. Who is this? we wonder, and we later realize that Cynthia's subconscious was forecasting the story's truth and outcome. Steele's close-ups in this film are particularly ravishing and give the film the glorious production value of Gainsborough paintings. I'm sure she was not paid anywhere near what it was worth for her to be who she was.

7. Speaking of paintings, the clarity of the print I consulted exposed to me, for the first time, the overall shoddiness of a matte painting depicting the façade of Hichcock's villa. I imagine much of it was cropped offscreen in the earlier home video copies I'd seen. Freda himself started out as an art critic and liked to dabble in painting; it would not surprise me if this piece were his work -- it could even be a detailed colored pencil sketch, from the look of it. It's first seen as Cynthia first arrives at the villa by coach; there's a cutaway to the façade, framed by some foregrounded flora like a young tree branch, some fronds, and (literally) a potted plant -- this sort of foregrounding was an authentication trick Freda had picked up from working with Mario Bava. We later see the same matte painting during a storm (where a lightning flash causes a flat reflection of the foregrounded branch on the house's supposedly uneven surface, spoiling an already cheap illusion) and during heavy rain (with overly large hose dribbles foregrounded with the rest).

8. The climax of Dario Argento's SUSPIRIA (1977) owes everything to the climax of this film, which is another fiery inferno overseen by a hate-maddened harridan. There is a moment when Cynthia pulls back a curtain to reveal the supposedly dead Margaret standing there, looking monstrous under her veil -- a premonitory shudder of Mater Suspiriorum without a doubt. It should also be mentioned that a quality print with restored color reveals a proto-SUSPIRIA use of Technicolor in play throughout. Decades before M. Night Shayamalan's THE SIXTH SENSE (1999), cinematographer Raffaele Masciocchi inserted a red gel splash somewhere onscreen immediately prior to each horrific moment.

9. The image which the film's US distributor used for the film's poster art shows Cynthia hanging upside-down as her deranged husband poises a scalpel at her neck. The point of this image always eluded me till this viewing, but in the dialogue, Bernard clearly (albeit hurriedly) states that he intends to restore his first wife's grave-spoiled beauty with the blood of his second, younger wife. The cutting of the scene suggests that a censor, somewhere, may have demanded the removal of various shots showing Cynthia being jabbed and cut, because there is blood clearly collecting in a large white bowl placed beneath her -- a kind of proto-TEXAS CHAIN SAW MASSACRE image, if you think about it.

10. I've always known that Robert Flemyng gave his all to this unlikely project, but to see his performance in perfect clarity reveals a wealth of little nuances to cherish -- particularly in all the business he gets to do when he first goes home after a day at the hospital. We see him go to his front door, observe that his wife is entertaining at a dinner party, and gaze ruefully through a window at the gathering. This establishes his covert nature. Then he proceeds to a secreted cellar entrance, where he follows a private stairwell past his wife's company, which further establishes him as cold and antisocial. As Martha signals Margaret that he's home, that it's time to send her friends and admirers away, Bernard goes into his den, tosses back a bracing drink or two, and then clutches the key to his private necrosanctum with the jaunty, privileged air of a Victorian clubman. He is especially good when exposed to the cadavers, observing them with careful gestures and awed hushes of adoration, his fear and desire fused... and his performance reaches its fever pitch when he first realizes that Margaret may not be dead, that she may still be alive or at least available to his desires, which must be the single most operatic sequence in Italian horror.

THE HORRIBLE DR. HICHCOCK was the subject of a Making Of verbal history, compiled by the late Alan Y. Upchurch and myself, which appeared in VIDEO WATCHDOG #49. Unfortunately that issue is now out-of-print, but for those of you who have it, it's a piece worth rereading, just as the film itself continues to reward repeat visitation. One of the great Italian horror films, THE HORRIBLE DR. HICHCOCK would surely reward the effort any video company made to dig it up.
Posted by Tim Lucas at Thursday, September 08, 2011