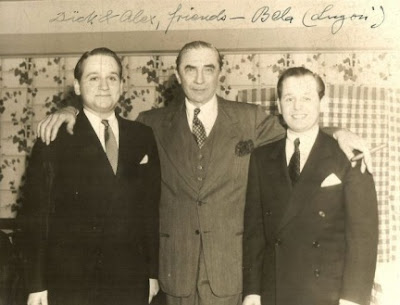 The first film I ever reviewed professionally was HORROR ON SNAPE ISLAND (1971), now better known as TOWER OF EVIL, a Richard Gordon production. When I attended my first convention, FanEx in 1991, Richard Gordon -- to my immense surprise and delight -- was the first friend I made. I bumped into him in the lobby, we started talking about that early CINEFANTASTIQUE review, about our earlier telephone contact when I was seeking to license clips from his films for a documentary that never got made, about his director friend Antony Balch (who fascinated me because of his connection to William S. Burroughs), and the serendipitous fact that the first book I ever published, the "Video Times" paperback YOUR GUIDE TO MOVIE CLASSICS ON TAPES AND DISC in 1985, had been co-written with none other than his older brother, Alex Gordon. Alex and I never met, but we collaborated through the mail.

I had to break off our conversation, engrossing and friendly and exciting as it was, because I needed to help Donna set up Video Watchdog's dealer's room table, but Dick (as he prefered to be addressed), beaming with friendly engagement, happily followed along and we continued talking as he perused issues of the magazine -- to which he promptly subscribed. I haven't done an actual head count, and don't really want to, but I strongly suspect that, in the decade-plus that followed, Dick Gordon wrote more letters to VIDEO WATCHDOG than any other reader. And, except for a couple such letters that may have fallen prey to my sometimes-less-than-professional filing system, every one was published. And proudly so.

One of the many reviewing duties presently in front of me is Tom Weaver's recent book THE HORROR HITS OF RICHARD GORDON, which now turns bittersweet. I am grateful to Tom for compiling that book in time for Dick to see it, but even moreso for being the friend to him that geography and my own disparate ambitions did not allow me to be, keeping him occupied and feeling appreciated and involved in life and film for as long as he did. I once wrote in an editorial what Dick's friendship to me, to Donna and our magazine meant to me, and I fortunately have Tom's memory, written to me, of reading that editorial to Dick and how it moved him and how he asked Tom to read it to him a second time. Thanks to Tom's sharing of that story, I felt a very real connection to Dick that transcended our first and only physical meeting twenty years ago. That's a very sweet memory and, of all the people I've known in this business over the years, it's hard to think of another memory concerning them that's as sweet in quite the same way. When he suffered a grievous personal loss a few years ago, I picked up the phone to share my condolences and we spoke as though no time had passed. I'm a bit of a mystic, and when I think of how this was possible, after nearly twenty years, and all the other criss-crossing that took place in our lives prior to our actual meeting, well, it gives one pause... to wonder, and to appreciate.

As Tom told me earlier today after relating this sad news, when I referred to Dick as the first Monster Kid, "That would be his older brother Alex, but Monster Kid Membership Card #0002 ain't too shabby." Indeed not. In observing Dick's passing, it is less his films that come to my mind and heart than this connection to the origins of Monster Kiddom I was privileged to have by sort of knowing and working with both of the Brothers Gordon. Their earlier example, so bold and enterprising, made it feel less strange and more respectable to do what I do, to love what I love, to be who I am -- and to be doing in middle age what I've been doing since I was a teenager. I am still trying to emulate them to the extent of actually breaking into the business of making films.

He passed away in hospital this afternoon at the age of 85. How serendipitous, how he would have loved knowing, that his last night on Earth would be Hallowe'en!