CAPERUCITA Y PULGARCITO CONTRO LOS MONSTRUOS ("Little Red Riding Hood and Tom Thumb vs. the Monsters"): This is the original Spanish version of the film later imported to the US by K. Gordon Murray Productions as LITTLE RED RIDING HOOD AND THE MONSTERS, available for the first time with English subtitles. Following other LRRH sequels, this is both sequel to LITTLE RED RIDING HOOD and 1957's TOM THUMB, as it finds Wolfie (from LRRH) and the Ogre (from TT) imprisoned in the castle of the Witch Queen by their fellow monsters for turning good. (We see them taken to a torture chamber where their feet are tickled.) Red and a slingshot-happy Tom Thumb (restored to full size by the Morning Fairy, which brings out a latent macho swagger), along with lovable Stinky Skunk and a pet dog, coincidentally rescue them when they must go to the Witch's castle to undo the haunting of their village's local water source, which has turned all their townsfolk into monkeys! In addition to the green-skinned Queen out of SNOW WHITE via THE WIZARD OF OZ, the monsters include a Hurricane Fairy (like the one seen in Ptushko's THE SWORD AND THE DRAGON), Two-In-One (half-man, half-monster like the Manster), a robot called "the Alien", Mr. Vampire (dressed in a Carradine-like top hat and cape, with Christopher Lee fangs), Frankenstino, and a pinheaded Boogie Man (amusingly subtitled as "the bugger man"). Stinky actually combats one monster by bending over and gassing him from his posterior, and Tom sings a song boasting that he's so tiny, "even with a magnifying glass, you could not find my hiney." Not unlike a weird conflation of Bert Gordon's THE MAGIC SWORD and THE BOY AND THE PIRATES, with songs. The entertainment value speaks for itself. Viewed on DVD.

THE PICK-UP: Sloppily-made but ambitious and attention-grabbing, this obscure 1968 roughie from R. L. (Lee) Frost first aroused fan interest when an exciting, hard-hitting trailer was included on one of Something Weird's TWISTED SEX trailer compilations. It was considered lost till one last-known surviving print was discovered, with hard Danish subtitles, in an overseas film vault. Two pick-up men are driving over a million dollars in protection money from Vegas to a mob rep in LA, but plead car trouble in order to take in a motel party with two attractive ladies picked up along the way, raising concerns at both ends of their itinerary. A bad idea turns worse when the women handcuff them and abscond with the dough, but are they in it for themselves, or are they working for someone else? The mostly handheld B&W photography is unconcerned with composition, but there are occasional arty touches like cuts to still-photo montages during the more violent moments. The dialogue is no more than you'd expect, the acting barely acceptable, but the sleazy paperback plot is pleasingly elaborate and stocked with twists and plenty of back-stabbing characters, so it plays similarly to Bava's BAY OF BLOOD; even the silly finale is not tonally unlike the surprise postscript of Bava's film. This was anonymously co-produced by David L. Friedman, who actually plays a pivotal role and seems to enjoy his long career's only bed scene with a naked lady. The library cues scoring the film are well-chosen and amount to a distinctive, edgy score. Pretty much the missing link between the 1960s roughies and the more ambitious crime sleaze epitomized by the GINGER films of the early 1970s. Viewed on Something Weird DVD-R.
Posted by Tim Lucas at Thursday, December 29, 2011

ENTER THE VOID: I'm coming to this 2009 film a bit too belatedly, I feel; it's now very hard, if not impossible, to think of it as anything but a counterbalance to Terrence Malick's THE TREE OF LIFE. Though akin to toxic eye candy with its increasingly fluorescent necrotic imagery of a gargantuan toy Tokyo, I liked this film to the same extent I found Malick's alternately boring and aggravating, though the void of its title is less indicative of the void of death than of the void of a life devoid of substance and exposure to nature. It's a painful film to watch, but its use of rhyming images is exceptional in its depiction of how events imprint us psychologically; I was particularly impressed when one scene of Paz de la Huerta cutting up vegetables in the kitchen was used a second time to show how something secondary and previously unnoted within that moment had also left its own imprint on the observer. On the other hand, Hitchcock's ROPE-learned maxim that scenes must be cut to become cinema still holds water; it's the cuts or dissolves from one image to another that give this story its meaning. Otherwise, the death motifs and the plays on its title are preposterously foregrounded and the film wastes entirely too much time floating through walls and bouncing from one building to another for the sake of sustaining the main character and POV's spectral fluidity. In one of those intervals, I found myself wondering how this film would have looked had it been made about a late 19th century farmer. All of them died too. Viewed on Netflix.
Posted by Tim Lucas at Wednesday, December 28, 2011

Though I assume many working critics do, I've never personally kept a list of the films I watch. The FILM COMMENT column about "The Last 10 Films I Saw" always bewilders me: how do they know? do they keep a list? do they just make this stuff up? But it occurs to me now that the information might be useful to me at a later date, as when compiling year's best lists and such, but. I am also tempted to make this resolve because it is the time of year to make resolutions and, frankly, because I need the discipline.

In the time I've become more casual -- indeed, lax -- about this blog, the muscle I formerly used to maintain it has grown flabby and it has begun to affect my approach to writing adversely in other ways. I think it's necessary to embrace a minor commitment like this, if only to make it that much easier to embrace more significant writing commitments. The muscle needs to be ready and prepared. So I'll not only list the films but add some comments about them as well.

I caught a bug over the holidays and am still recovering. Yesterday I didn't feel like doing much other than watching movies, so I actually watched five.

CEREMONY: The first feature written and directed by Max Winkler, the son of actor Henry Winkler, this is a moderately surprising retread of one of the perennial chick flick situations: a former boyfriend crashes the wedding of the girl he never forgot, determined to win her back. In this case, the bride is the formidable Uma Thurman, both taller and older than leading man Michael Angarano. Character is usually the saving grace of such films, and this has some memorable ones and some clever dialogue, but mostly it has the courage to go somewhere other than where the genre has taught us to expect. I liked supporting actress Brooke Bloom particularly, and was impressed by the taste of whoever selected the source music. Viewed randomly on cable.

ONE NIGHT IN THE TROPICS: Abbott & Costello's first feature casts them under their real names as amiable wise guys serving as backup to reformed gangster William Frawley. Their routines seem a bit forceably shoe-horned into a story derived from LOVE INSURANCE, one of the rare non-Charlie Chan novels written by Ohio native Earl Derr Biggers. Top-billed Allan Jones and Nancy Kelly sing, none too memorably, and THE MUMMY'S HAND's Peggy Moran has a number too, which shows singing to be not particularly her forté. Kept daydreaming throughout about how Scorsese might have worked with Costello, given the chance, because he seemed to me like a more docile Joe Pesci in this. Was surprised to discover that the "Sir Walter Raleigh" coat-over-the-puddle gag from A HARD DAY'S NIGHT was stolen from here. Viewed on Universal DVD.

BUCK PRIVATES: Abbott & Costello were the best-reviewed aspect of ONE NIGHT IN THE TROPICS, so they top-lined their second feature and first real movie vehicle. They play two sidewalk tie-selling hustlers who are chased by street cop Nat Pendelton into a movie theater that's doubling as a recruitment center, ushering them into the Army. A much better movie than their first, given additional zest by the Andrews Sisters (who melodicize their way through several numbers, including their signature tune "Boogie Woogie Bugle Boy") and some impressively rubber-legged boogie-woogie dancers. Making the Army look like Heaven on earth, with free cigarettes and doughnuts and pretty WACs offering their phone numbers, this became Universal's biggest money-maker to date, which explains why some of its gags were subsequently quoted in Warner Bros. cartoons like "To Duck Or Not To Duck," which reprised some of the boxing gags. Viewed on Universal DVD.

THE SEARCH FOR BRIDEY MURPHY: I've long wanted to see this supposedly influential Paramount release, based on a best-selling real life account of a hypnotist who successfully regressed a friend's wife to a past life in Ireland. Louis Heyward hosts the film in the manner of a TV or radio show, but as the hypnotist rather than himself, walking from a bare set area onto a furnished set to answer a ringing phone that propels the plot into motion. SHADOW OF A DOUBT's Teresa Wright, deliberately muted and deprived of closeups in her early scenes, becomes the unexpected center of attention as the sessions begin. THE THING'S Kenneth Tobey plays her husband. Scripted and directed by Noel Langley (one of the screenwriters of THE WIZARD OF OZ), this is an intriguing experiment in docudrama filmmaking, and one of the earliest screen investigations into untapped areas of the mind; it's most significant success is that it manages to hold one's interest without action, relying almost entirely on Q&A dialogue derived from the original recordings. Viewed on Netflix.

LIMITLESS: I'd not heard of this one before, but I found the premise hard to resist: a blocked writer uses an experimental drug that makes the brain's entire capacity available to the user, allowing him to write a first novel in only four days before sending him off in constant search of newer, more challenging, eventually deadlier frontiers. Bradley Cooper makes a believable protagonist and Robert DeNiro lends third act gravitas as a business tycoon who elicits Cooper's aid in facilitating a corporate merger that would make him a man of unparalleled power and influence. Teeming with interesting, well-cast secondary characters and unexpected snaring incident, it's also refreshing in that it remains true to what's conceptually exhilarating about the drug, teasing the possibility of a dark outcome without finally submitting to it. Directed by Neil Burger, whose THE ILLUSIONIST I admired. Watching this, I was reminded at times of such disparate films as BRAINSTORM, STRANGE DAYS and OLDBOY. Worth seeing. Viewed on Netflix.
Posted by Tim Lucas at Tuesday, December 27, 2011

Email ThisBlogThis!Share to TwitterShare to FacebookShare to Pinterest
Labels: Buck Privates, Ceremony, Limitless, One Night in the Tropics, The Search For Bridey Murphy

My Return to the NaschyCast! 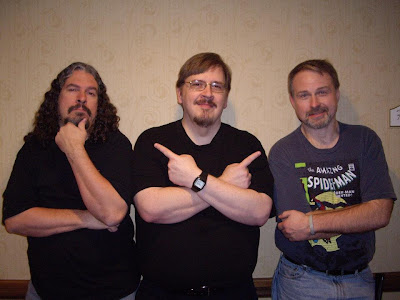 Now available for your listening pleasure is my return visit to Troy Guinn & Rod Barnett's Paul NaschyCast, which you can download from the link at the bottom of Rod's intro here. We recorded our two-hour conversation at the hush-hush Wonderfest reunion last month and discussed (among other films) Carlos Aured's HORROR RISES FROM THE TOMB, Javier Aguirre's HUNCHBACK OF THE MORGUE and Jacinto Molina's THE BEAST AND THE MAGIC SWORD, while also managing to touch on other filmmakers as diverse as Jess Franco and Eric Rohmer. My views on these films were sometimes at odds with my hosts' opinions, so this led to some debate and discussion I believe you'll find interesting.
Posted by Tim Lucas at Friday, December 23, 2011