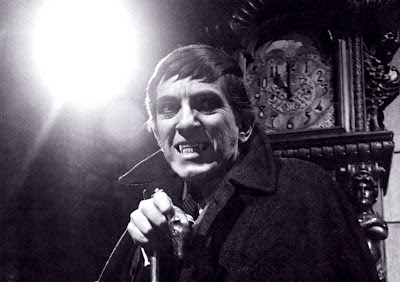 It was such a full day. A group of our contributors and I spent the day e-mailing one another about DARK SHADOWS, preparing a Round Table Discussion of the classic Dan Curtis series (1966-71) which we intend to accompany VIDEO WATCHDOG 169's coverage of MPI's lavish new box set of the Original Complete Series. Today was the second day of our RTD and the day it caught fire, generating no less than 79 e-mails from a team of seven.

As our furious flurry wound down, I went downstairs to watch another six episodes of DARK SHADOWS, continuing a viewing schedule I've been keeping since late January/early February, during which time I've watched close to 300 episodes. I recently completed the original Barnabas story arc, the one that begins with Willie Loomis releasing him from his coffin in 1966 and ends with Ben Stokes placing the chains and locks on the coffin in 1795, because Barnabas' father couldn't bear to fire a silver bullet into his broken heart to end his deathless torment. There is no other tragedy in the history of horror entertainment that begins to approach it; it is less than 25% of the entire series, but to approach it requires the resolve and fortitude of a mountain climber. It is a journey worth the taking.

But I digress... after I could not bring myself to watch another episode, I came back upstairs, got online, processed a few more late-arriving emails about DARK SHADOWS, then got on Facebook, where I updated my cover photo with a picture of Jonathan Frid sitting next to a graffiti image of his best-loved character, taken from the pages of an old issue of 16 SPECTACULAR... and then the news came, posted by his co-star, his Josette, Kathryn Leigh Scott.

Jonathan Frid died last week, on Friday, April 13, at the age of 87. The news was just released this evening, most likely to protect the privacy of his loved ones. 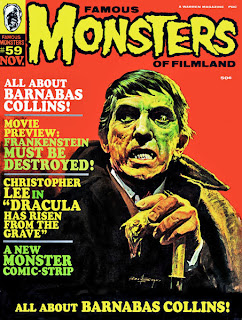 It means staying up all night, but I need to eulogize him. He's been at the center of my consciousness this entire year -- I got a Kindle Fire for Christmas and discovered that it was ideal for viewing Netflix episodes of DARK SHADOWS at bedtime; that's how I saw a good number of my first 160 episodes before the MPI box set arrived. I've written a great deal already for the Round Table, as have others, and I feel sure that the correspondence we'll share tomorrow has every chance of exceeding what we produced today, if we can put our hearts into it. I say this because anyone who writes something sizeable about any subject does so because they want it to endure, and it's upsetting to have the centerpiece of our fête taken away from us before the icing is on, before the blue candles are lit. We had hopes that he would see it.

I need to eulogize him, as I say, but though I have seen hundreds of DARK SHADOWS episodes, I am all too aware that I have seen only a fraction of the Barnabas Collins he portrayed in totality. This fraction, those 250+ episodes, comprise the most three-dimensional vampire in the history of filmed entertainment. We know him both after and before he was cursed. No matter what evil he commits, we fully understand what motivates him; if we cannot sympathize, we cannot help but empathize. We walk beside him as we do with no other monster, because there is real depth and duration in the relationship.

Barnabas was also the first romantic vampire. A lot was written by Hollywood publicity mills in the 1930s about Bela Lugosi's sex appeal, about his brand of vampirism being "the strangest love ever known," but his Count Dracula was portrayed without emotion. To borrow one of Lugosi's great lines from THE RAVEN (1935), Frid's portrayal of Barnabas -- with his serrated bat-wing bangs, oval onyx ring and wolf's head cane -- was that of a monster "with the taint of human emotions." As the series' storyline veered from its REBECCA origins to one closer to VERTIGO, Barnabas recovered from the primal trauma of seeing his beloved Josette fall to her death from Widow's Hill by trying in vain to recast other women in her irretrievable image. When series creator Dan Curtis made DRACULA with Jack Palance, he imposed a similarly romantic storyline on Bram Stoker's novel, and this subsequently inspired Francis Ford Coppola's take on BRAM STOKER'S DRACULA and, more recently, the TWILIGHT series.

Frid created this character in a medium he could scarcely have expected to last: live on videotape, a medium networks were known to erase and reuse. Fortunately, nearly all 1225 episodes of DARK SHADOWS survive in some form or other. In them, given the nature of the medium (which was in essence live theater), you will see Jonathan Frid forget his lines, look for the teleprompter, and fumble his dialogue into amusing Yodaisms, but you will also see hundreds of episodes in which he thrills you, breaks your heart, or chills your blood. A Canadian stage actor prior to his hiring, specializing in Shakespeare plays and English drawing room comedies, Jonathan Frid brought to DARK SHADOWS a gentlemanly, Old World sensibility that made his portrayal elementally convincing. When Barnabas first arrived in Collinsport, he carried the ancient past with him in a doting attention to language, an appreciation, shall we say, of the niceties. Introduced to governess "Vicky" Winters, who then gave her fuller name of Victoria, he expressed courteous shock that anyone should address such an attractive young woman with any lesser name.

Frid was 42 when he won the role -- about the same age as Boris Karloff when he came down the west coast from Canada, where he had been driving trucks, to win the role of the Monster in James Whale's FRANKENSTEIN (1931). As with Karloff, it was late enough in Frid's life and career for him to appreciate the good fortune it represented, not only to him but to his hard-working fellow cast members. But during his daytime tenure, he also tasted enough of fame to know that it wasn't what made him happiest. After the show's run, a period which also encompassed the feature film HOUSE OF DARK SHADOWS (1970), he returned to the stage for the most part, and made the occasional film, like Oliver Stone's Canada-made directorial debut SEIZURE (1974).

In what now amounts to his final public gesture, Frid personally signed 2500 cards that were included in MPI Home Video's coffin-shaped box set DARK SHADOWS THE COMPLETE ORIGINAL SERIES, a 133-disc limited edition set that sold out well in advance of its street date. It is the most handsome DVD box set I've ever seen, but -- the next time I reach for a new set of discs -- it's going to be bittersweet to have to open Jonathan's coffin to fetch it! (For those of you who missed obtaining one of your own, an unnumbered, unsigned second edition is being released later this summer.)

There will be much more to say in the pages of VIDEO WATCHDOG 169. For now, join me in extending our fondest farewell to a genuine horror icon.
Posted by Tim Lucas at Thursday, April 19, 2012

The Olympic Swimmer from Planet Ummo 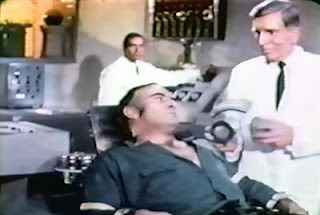 Michael Rennie (right) goes to work on Paul Naschy in ASSIGNMENT TERROR.
Saw an episode of THE PATTY DUKE SHOW this evening called "The Girl From N.E.P.H.E.W." in which Patty's family play host to a debonair guest who works for INTERPOL, whom Patty assumes to be a secret agent. This fellow was played by an actor named Murray Rose, whose distinctive voice sounded weirdly familiar to me. About halfway through the show, I realized where I'd heard him before....

Rose's IMDb page doesn't show too many screen credits, but his Wikipedia page offers some interesting revelations about the man whose voice issued commands to the Werewolf, the Mummy and, of course, the Faranksellen Monster. However, it won't tell you anything about his dubbing career.
Posted by Tim Lucas at Friday, April 13, 2012