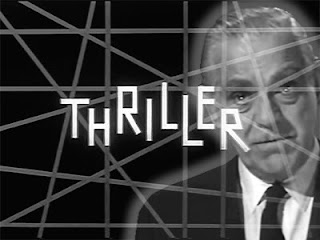 You probably have the same question I did in reference to MPI's forthcoming two-disc set THRILLER - FAN FAVORITES, which collects 10 of the very best THRILLER episodes at a reduced price ($19.98): "The Grim Reaper", "Pigeons From Hell", "The Watcher", "The Hungry Glass", "The Cheaters", "The Incredible Dr. Markesan", "The Weird Tailor", "The Purple Room", "The Prisoner in the Mirror" and "Well of Doom." The answer to that question is: No, they do NOT include the audio commentaries nor the isolated music tracks found on the complete series set. Therefore, even though this set represents THE absolute best classic horror bang for your buck of any DVD released so far this year, the complete box set is still the way to go. So, unless you're looking for the perfect Halloween treat for that favorite young person in your life, I advise you to splurge, because you'll want these for Trick or Treat night, or run SUSPIRIA or HOUSE ON HAUNTED HILL again and await the next Amazon sale.

This is the 1,000th entry here at Video WatchBlog, which began almost seven years ago, like most things I do, on the spur of the moment on October 8, 2005. Since then, it has won two Rondo Hatton Classic Horror Awards as Best Blog, in 2006 and 2008, a fact of which I am very proud. It has been shamefully neglected since I joined Facebook in 2009, but rest assured I have pretty much been doing over there what I used to do here more regularly, and I've collected (to date) 3,450 friends or followers, which is somewhat more of an audience than I had here. That said, Donna is encouraging me to jump-start the WatchBlog, perhaps with another template, perhaps with another server, and make it a place where I can post useful paragraphs such as the above, and the occasional useless ones, and make it available to subscriptions, RSS alerts and such. So this milestone does not necessarily mark the end of VWb, but rather an opportunity to invite a new beginning or chapter. I will let you know once the decisions are made.

Tony Scott: A Beginning and an End 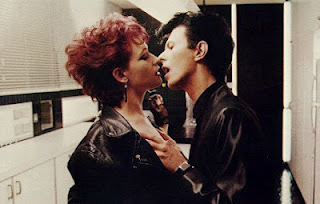 Tony Scott's THE HUNGER (1983) has one of the most arresting opening sequences of any horror film; it's a masterpiece of cross-cuts, flashbacks and flash-forwards, intense music and ice-cold style, largely without dialogue and so forcing us to pay close attention to visual codes, plunging us immediately into the deep end of an amoral, self-interested world where vampires are the victims, the victors and the evening's entertainment. "Bela Lugosi's Dead," sings Peter Murphy of Bauhaus, but it was actually Tony Scott himself throwing down a gauntlet on the floor of vampire cinema in general. Pictured: Ann Magnuson and David Bowie turning up the heat in this very chilly sequence.

Tony Scott -- whose other films as a director include the Quentin Tarantino-scripted TRUE ROMANCE (whose scene between Christopher Walken and Dennis Hopper is commonly cited as one of the very finest of the last 25 years) and the era-defining TOP GUN -- took his life last night by jumping off the Vincent Thomas suspension bridge into Los Angeles harbor, having left a suicide note behind in his parked car. He was 68. My heart goes out to his wife and children, and to his friends and co-workers past and present (some of you perhaps among them) as we all reel from the suddenness and mystery of this terrible event.

While watching Warner Archive's new release of Sergio Corbucci's THE SLAVE (Il figlio di Spartaco, 1962), I found myself quite impressed by the Cinemascope photography of Enzo Barboni, a longtime associate of Corbucci who later directed the "Trinity" films under the alias E. B. Clucher, and who also photographed Steve Reeves' final starring role in A LONG RIDE INTO HELL (1970). If you order this film -- and I think you should -- take my advice: once you've watched it through, watch it again at a moderate fast-forward speed, the better to appreciate how beautifully pre-planned Barboni's sweeping camera moves were. There is a grandeur in them that takes the production well beyond its budget, while also lending something of the film's themes of destiny to its overall mapping.
An aspect of Barboni's cinematography that I find particularly intriguing is its use of shots that contrast extreme close-ups and deep focus. So far as I can tell, the first of the shots I'm presenting here (above) was either achieved with a telephoto lens or by filming the foregrounded crucified figure against a blue-screen and matting in the location shot from the Egyptian desert later. But there are a handful of shots scattered throughout the picture, all at dramatically critical moments, when Barboni makes use of a split-diopter lens, a lens rarely used in films but which literally split the image, cleanly dividing it between extreme near and deep focus. I'll present these frames here for your study and pleasure, and I encourage you to click on them to make them full-sized:

The first of these shows Steve Reeves (such amazing blue eyes!) as Randus, an orphaned Roman centurion who discovers he is the son of the crucified rebel leader Spartacus, and who commences a dual life, fighting for Rome by day and against Rome by night as a helmeted, sword-wielding forerunner of vigilante heroes like Batman. The shot occurs when he is forced to stand impassive as Crassus (Claudio Gora) mortally wounds one of his most devoted followers and feeds him to his pet piranha. The second occurs moments before a rebel assault on the palace. The third shows Claudia (Gianna Maria Canale) eavesdropping on Caesar (BLACK SUNDAY's Ivo Garrani) as he announces his intention to have Randus crucified like his father. The final shot shows Randus conversing from his prison cell with one of his compatriots.
Toward the end of the film, Barboni startles the viewer by interrupting a sustained high angle shot with the woodwork of a crossbeams raised into view, again perfectly in focus against the crisply detailed background.

I'm not certain what inspired Barboni to play these eye-catching tricks with dimension, but the fact that Randus is leading a dual life, a divided existence, may have something to do with it. Watching THE SLAVE made me pine for the days when the art of cinematography was rooted in principals of storytelling rather than piling on lots of eye candy spectacle -- and the result of that enrichment, oddly enough, is spectacle.
A review will be forthcoming on my Pause. Rewind. Obsess. blog, followed by a more detailed on in VIDEO WATCHDOG #170. 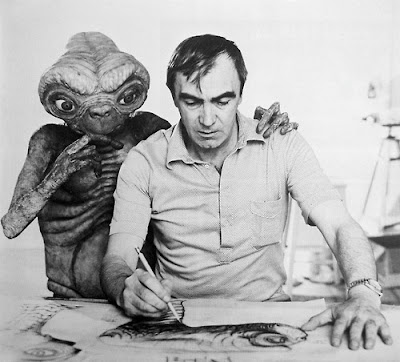 Carlo Rambaldi did so much that general audiences aren't aware of, even things that devotées of strange films do not know.

For example, he created the life-size dragon for Giacomo Gentilomo's SIGFRIDO, the 1958 version of SIEGFRIED; he also devised a fully submersible yet fire-breathing dragon for THE MEDUSA AGAINST THE SON OF HERCULES (PERSUS THE INVINCIBLE), as well as its unforgettable, tree-like cyclops of a gorgon, not to mention many other uncredited marvels of the sword-and-sandal pictures. Working with Mario Bava, he made John Phillip Law's scuba-like masks for DANGER: DIABOLIK, he revolutionized the art of special makeup effects by redirecting them to gory ends for BAY OF BLOOD, and he designed the hideous burned visage of BARON BLOOD. His job of creating the illusion of living eviscerated dogs for Lucio Fulci's A LIZARD IN A WOMAN's skin was so convincing, it nearly got its director thrown in prison. He built the screen's most convincing, articulated, severed head for (ANDY WARHOL'S) FLESH FOR FRANKENSTEIN; he gave life to the giggling puppet that arbitrarily trots onscreen prior to a grisly murder in DEEP RED; and, of course, he was responsible for White Buffalo that charged through the delirium of Charles Bronson in the film of that same name, and also the hydraulic, octopus-like spawn that got a hot date with Isabelle Adjani in POSSESSION.

He was unfairly maligned for the failure of his life-size robotic KING KONG; he could deliver beautifully within reasonable perimeters. He was in fact the Michelangelo of the popular Italian cinema, and of the international cinema for a time. But nowadays such men are no longer needed, and woe is us.

This Washington Post article acknowledges his better-known assignments, and one or two more. Everyone who loves cinema should salute Carlo Rambaldi, a true artist and artisan, for his lifetime of service.
Posted by Tim Lucas at Friday, August 10, 2012