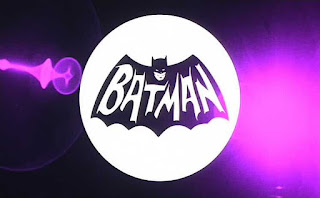 Netflix has added BATMAN, the 1966 movie now redundantly called BATMAN: THE MOVIE. I couldn't resist playing the main titles sequence again, which, for me, is like a PULP FICTION adrenaline shot to the heart.

I can remember seeing it for the first time at Cincinnati's Twin Drive-In Theater, and looking forward to seeing the animated titles from the television show unfold in full color on the giant outdoor screen with Neal Hefti's theme kicking in... but something else happened. Instead, Richard Kuhn -- a titles designer on staff at 20th Century Fox (IN LIKE FLINT, FANTASTIC VOYAGE, etc) -- created the sort of sequence that could only have come from someone who had never seen the series, but was given a brief amount of time to utilize the film's various performers in costume. He created a more monochromatic, yet boldly tinted, high contrast universe for these characters, intercutting them with imagery out of a 1940s French potboiler, coated in washes of deep blue, cautionary yellow, garish green and sexy lavender. Since the Twin had two screens, I was worried for a moment that we'd been given the wrong directions to the right screen, but then Adam West sauntered onscreen in a blue spotlight worthy of Carol Doda and my young heart soared back up to the right place. And when the "Rogues Gallery of Supervillains" made their appearances, this more adult context actually made them look satanic and lethal.

Set to one of the most exciting pieces of music that Nelson Riddle ever performed, with the leitmotifs for the various crooks inserted with terrific timing and flair, the titles are so vibrant, so different, so extraordinarily promising that little 10 year old me was -- incredibly, one would imagine, for a Batfan of my age and intensity -- actually disappointed by the movie that followed, though I sure found Lee Meriwether's Catwoman interesting. And that may point to why: my tastes were maturing, and Richard Kuhn's credit sequence with its manic European flair, may have helped nudge my nascent aesthetics over the edge into puberty, with a little subsequent help from Ms. Meriwether's purring. It took me years to appreciate the comparatively style-less movie as the endlessly quotable, hilarious gem that it is.
Posted by Tim Lucas at Thursday, December 27, 2012 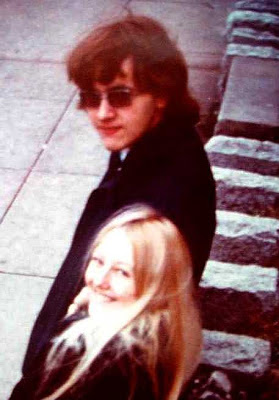 Married 38 years today. How did this happen?

Like most of the things that have turned out to be good ideas in my life, including VIDEO WATCHDOG, it wasn't entirely my idea.

When we were 19 and 18 respectively, Donna and I had both left our respective homes and found an apartment near the University, only to discover that our landlord -- Lou Franklin was his name -- was not inclined to rent his mousey efficiencies to unmarried couples. Of course it was none of his business; either one of us could have taken the apartment as an individual and left him none the wiser, but we were both so young... I suppose we were accustomed to our elders telling us what to do, and doing just that.

My mother gave us the $25 for our marriage license. Donna was relaxed and confident and loving on our wedding day, while I was... "apprehensive" is a good word. There's a picture of me walking out of the office of the Justice of the Peace with my arms upheld, like a man under arrest -- I meant it as a joke, and it did get laughs, but you know... it occurred to me, and so there probably was some furtive truth in that expression. I still am apprehensive in some ways because, funnily enough, I don't really believe in marriage, unless people want to start a family. Instead, I believe in friendship, and if I have one of the best marriages it's been my privilege to observe, it's because I married my best friend -- someone I first got to know through letter-writing, which let us become deeply attached without the usual distractions of physical concerns like whether or not we were the other's "type." I always thought I would end up with someone with dark hair. Go figure.

We are both aware of aging into a kind of advertisement for marriage and true love, and giving some of our younger acquaintances hope that it's possible to meet and stay with someone for a lifetime. We find this sweet and funny, and perhaps a bit naive. Because no marriage is a cakewalk. Let me amend that: no conscious marriage is a cakewalk. Ours was probably as close to one as you can imagine until we began working together in 1990. Working together means we often have to put our professional life as co-workers before our interests as husband and wife; it sometimes means disappointing each other, contradicting each other, yelling at each other, being impatient with each others' (all too predictable, after 38 years) human failings and frailties. Sometimes we make the dread mistake of talking business in the bedroom.

People often remark that we were made for each other, yet there are vast areas of life in which we don't connect. It must admit it bothers me that we don't share many of those interests where I am most myself and most fulfilled... but how wonderful it is that she loves me anyway, and this is also the gift I give to her. And you know what I've noticed from other relationships? Shared passions don't last. They are potent, ardent and all-consuming, and either burn out or press on to something still more incendiary, like jealousy or hate. If you're asking me, if you want a relationship that will last, don't base your commitment to one another on mutual passions; base them instead on your character, your sense of humor, your shared frames of reference, the ways you look at everyday life -- because it's on those levels where you have the greatest chance of remaining the same person for the rest of your life. That's the constant you who is capable of making and keeping a promise of constancy.

What's it like to be together this long? At some point, you begin to recognize that you're held together as much by time as by love. We remember the same things (though she corrects the way I remember them); we've experienced the same triumphs and losses, the same pleasures and grievings; we've been the picture takers at each other's great moments, and we've fought side by side the yearly, monthly, daily, hourly war that is life all this time. And yet somehow, before any of this happened, there was something binding in our fine print, a promise even greater than the one we initially made to each other. To wit: Who could have guessed that, throughout my now-40 year career as a writer, Donna -- of all people -- would become my most valued and important professional associate? How could I have known that this funny little Munchkin from Western Hills, who drew fetchingly eye-lashed smiley faces at the end of her letters, would become the one person in the whole universe capable of designing MARIO BAVA ALL THE COLORS OF THE DARK? Who would do everything to keep the business of VIDEO WATCHDOG running that I could not personally do? How could I have known that she would someday be able to market my work with greater success than either Dell or Simon and Schuster could? And how could she, The Monkees' #1 fan, have known that this shy, bookish boy from Norwood would someday work for Michael Nesmith and show her the path to her first hug from Davy Jones? It's a mystery, in which the only real certainty is the friendly face that looks back at me in the midst of it.

Of course, being with someone you love is no guarantee against loneliness; it's no guarantee that your heart will never break again. But it does (or should) mean that you don't have to go through life's tests and beatings all alone, because there is always a hand waiting to accept yours in the dark, and it's there for you whether it's awake or asleep. This is a way of life I can recommend.

Living with her these past 38 years has been an adventure in gratitude, and I just felt like saying that.

How did this happen? Just lucky, I guess.
Posted by Tim Lucas at Sunday, December 23, 2012

It's The Little Things

Richard Harland Smith's heartfelt mention and discussion of the new issue of VIDEO WATCHDOG on his TCM Movie Morlocks blog is one of the nicest professional (and personal) tributes I've ever received. It also brought us a nice, last minute bumper crop of orders from new customers, Donna tells me, which makes us doubly appreciative of his kindness.
Posted by Tim Lucas at Friday, December 21, 2012

You Bet Your Tingler 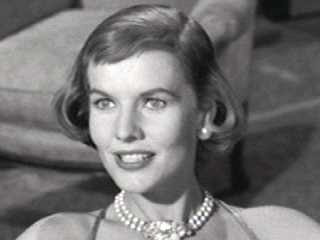 While watching YOU BET YOUR LIFE on Netflix during dinner tonight, I was surprised to see British-born actress Patricia Cutts as a guest contestant. What's even more surprising is that I recognized her first as a PERRY MASON guest star before I connected her as the philandering wife of Vincent Price in THE TINGLER, the one whom he assures a certain gun could make a hole in her "the size of a medium grapefruit."

She's always such a sleek, scheming, cold-blooded, glamorous character in those of her portrayals I've seen, it was a treat to see how casual, romantic (she chose "Great Lovers of History" as her quiz area) and daffy she apparently was in real life. It was mentioned on the show that she and Groucho were friends ("I know you, Pat, but not as well as I'd like to," the host brashly admitted) and, if her body language was any indication, she appeared a bit smitten with him. While looking for a picture to illustrate this notice, I discovered that she died from a barbiturate overdose in 1974 at the tragically young age of 48 -- only two days into what would have been a long-running role in the venerable British series CORONATION STREET. Her replacement stayed with the show until her own death in the late 1990s.

Anyway, pay Pat Cutts a visit -- she's in Netflix's Episode 9 of YOU BET YOUR LIFE. 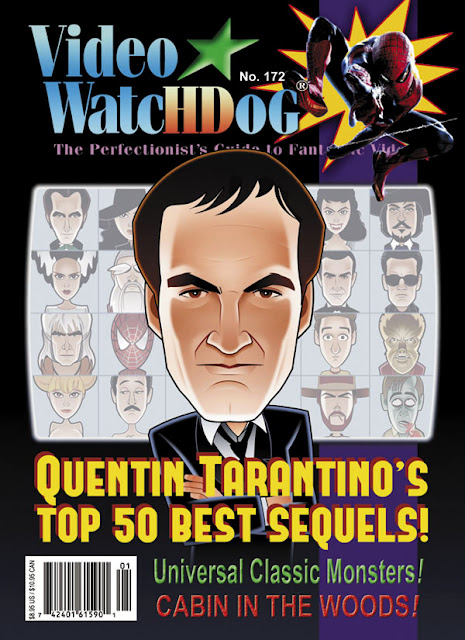 With our Universal Classic Monsters issue (#171) just reaching the hands of our subscribers, we have another completed issue already in the pipeline for delivery just before Christmas -- and it's a doozy!

Cover story: Just in time to complement the Weinstein Company's theatrical release of DJANGO UNCHAINED in theaters on Christmas Day, here's my interview with Quentin Tarantino about his 50 favorite movie sequels! This interview was conceived and organized by the French magazine STUDIO CINÉ LIVE, where the piece is simultaneously appearing in French and in shorter form, but VIDEO WATCHDOG is presenting it exclusively in English and in its full length of 23 uninterrupted pages!

Check out this link for our free preview, and order your copy today! We have a feeling this one is going to disappear quickly!
Posted by Tim Lucas at Friday, December 07, 2012