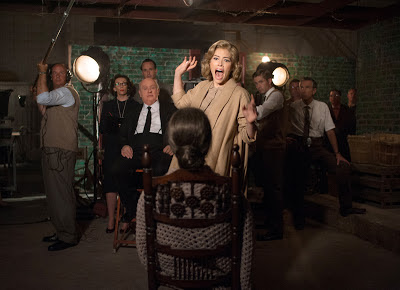 I found HITCHCOCK kind of fascinating. Never mind the Ed Gein interweavings, which are preposterous, and the extramarital teasings, which at the very least are chronologically misplaced. Anthony Hopkins and Helen Mirren seem miscast, but they are better actors than their counterparts in THE GIRL and they succeed completely in inhabiting and telling the story of their script, with depth and nuance and power; in the process, they take this tissue of fact-based fabrications and say something true and honest about Hitch and Alma -- not true to the moment of their lives, perhaps, but to its sum. I thought Scarlett Johansson was perfection as Janet Leigh (requiring much more subtlety than I knew she had), and James D'Arcy also a believable Anthony Perkins. The scene of Hitch listening to the first audience's reaction to the shower murder made me wince with emotion. 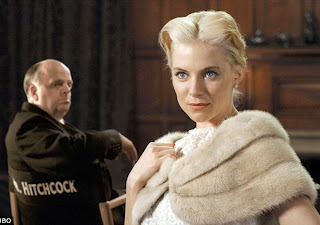 The HBO Hitchcock movie THE GIRL (2012) held my interest, not least of all because its casting seems in better focus than the major studio HITCHCOCK, but it's still thin broth. And puzzling: there is so much there that I've never read about in Hitchcock bios, and so much in the bios that wasn't dramatized, I was left questioning scenes as much for what they had to offer as for why such outright invention was considered necessary. When the MARNIE honeymoon rape scene was depicted to suggest that Tippi Hedren actually stood nude on set in front of Hitchcock, and that he included the scene specifically to arrange this, I finally knew enough to call "Fowl' (no pun intended, really). The BIRDS attack scene was nicely restaged, but the opportunity to say something useful about these people, or even about sexual harrassment, was spoiled by the decision to eliminate any glimpses of Hitchcock's humor and make the whole thing a one-sided, one-note tissue of suffering.

From the VW Archives: Boris and Bela 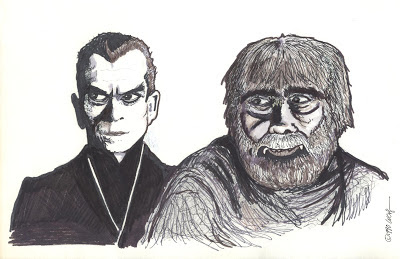 Here's something from the archives I thought might interest you.

While going through a portfolio of some old artwork recently, Donna found this drawing that I did back in 1990. It was done at the dawn of VIDEO WATCHDOG time, at the tail end of the same time I drew several pieces for our very first issue, for the simple reason that we weren't able to illustrate everything. This piece was going to accompany my review of Greg Mank's book on Karloff and Lugosi, and depicts them in their respective roles as Hjalmar Poelzig in THE BLACK CAT (1934) and Ygor in SON OF FRANKENSTEIN (1939), because I intended to note in my review the coincidence of their success during the 1930s with the foreignness of their respective personas. I remembered this piece as almost photo-realistic in its perfection, but now, more than twenty years later, it looks a good deal less accomplished and I'm glad it didn't see the light of print.

That said, I'm happy to share it with WATCHDOG readers here, now, as a page you didn't see.
Posted by Tim Lucas at Wednesday, January 16, 2013 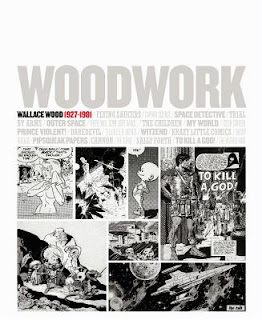 Today I received from Amazon my copy of this deluxe coffee table book documenting the amazing career of comics artist Wallace "Wally" Wood. Just a page-through summons so much emotion. I've always been a Ditko guy, but Wood really grabbed me this past year as I rediscovered his astonishingly lifelike, detailed work for early MAD and some of his later adult work like CANNON and THE PIPSQUEAK PAPERS (which I find touchingly funny, tenderly erotic and, I suspect, painfully autobiographical).The text is bilingual (English/Spanish) and the art reproductions are ideal. One big surprise that leaped out at me: on the basis of some daily strips reproduced from "Sky Raiders," Jack Kirby inked by Wood can be indistinguishable from Jim Steranko. 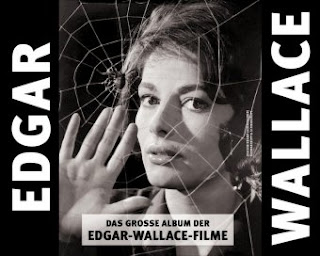 Also new, but available only as a super-pricey import, is this hefty hardbound photo album documenting the 32 Edgar Wallace krimi-films produced by Rialto Film of West Germany during the 1960s and '70s. Co-written by leading Wallace-krimi scholar Joachim Kramp (who tragically died in 2011, before this last dream project was fully realized) and Gerd Naumann, this thing must weigh as much as the Bava book, and in addition to a standard edition being made available to Amazon and similar outlets, it has been produced in four limited editions of 500 each sold exclusively by the publisher, Schwarzkopf & Schwarzkopf -- personally signed by the buyer's choice of actors Karin Dor, Karin Baal or Uschi Glas, or composer Peter Thomas. I was lucky enough to snag #413 of the Karin Dor set. The fact that this book is essentially a collection of all the photos taken on the sets of these films (including never-before-seen color shots from THE FELLOWSHIP OF THE FROG and THE TERRIBLE PEOPLE) makes the purchase doubly attractive to English-speaking fans; the English text is introductory and minimal, though one-page interviews with Dor, Baal and actor Joachim Fuchsberger are also included. My favorite images in the book show actor Klaus Kinski's happy demeanor on various sets (contrary to his mentions of the films in his autobiography), various gag shots (including one of the Monk with the Whip being instructed in how to snap his lethal weapon by someone in elaborate cowboy dress), and visionary director Alfred Vohrer at work with his assistant Eva Ebner. I have a few quibbles with the end product: in my opinion, whoever was responsible for the layout didn't always pick the best shots to reproduce at full-page size; also, the book's weight and proportions make it a bit unwieldy. A taller book would have been more balanced and easier to peruse. Also, I'm uncertain of how well the book's binding is going to hold up over time, and I was a little annoyed that my copy arrived with its back cover slightly crinkled. Nevertheless, as an artifact, it's damn near irresistible.

According to the S&S website, the book is not being sold outside Europe, but the publisher (who does speak English) agreed to send mine for an additional postage charge of about $65.
Posted by Tim Lucas at Tuesday, January 08, 2013