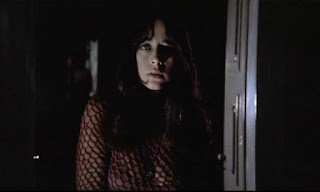 Thanks to Stéphane Derdérian, I've been able to screen the newly restored version of Jess Franco's 1973 film AL OTRO LADO DEL ESPEJO ("The Other Side of the Mirror") starring Emma Cohen, Robert Woods﻿ and Howard Vernon. The work on it was only recently completed, and work is now about to begin on the restoration of its considerably different French version, the hardcore LE MIROIR OBSCENE ("The Obscene Mirror"), which adds Lina Romay to the mix in a significant added role.

Among the most dedicated and knowledgeable of Franco collectors, AL OTRO LADO DEL ESPEJO has acquired the well-deserved reputation of being among Franco's most unique and ambitious films, and one of the finest productions of his most fertile period. I've long been familiar with the Spanish version thanks to a copy I obtained many years ago from European Trash Cinema, which ran 78:52. To my amazement, the restored version runs 95:24, which adds something close to 15 minutes of previously unseen footage even with the PAL>NTSC conversion of the VHS factored in. 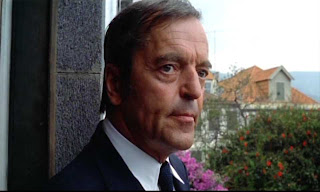 The most noticeable restored footage involves nudity, which was forbidden in Spanish films during this period, but some dramatic and music scenes are also extended. This is, along with VENUS IN FURS (1969), Franco's most musical dramatic film; indeed, one unusual aspect of the film is that it follows the evolution of a song ("Madeira Love") from the moment its melody is first picked out on piano to its composition and first live performance, and further on to its becoming the theme of a group of friends and performed by other artists. I had to watch the film without subtitles, which haven't yet been added, but the music lends the film such continuity that it suffices as narrative on its own level, ending the story on an impactful note of operatic grand tragedy. The newly restored audio restoration gives the jazz soundtrack real presence. 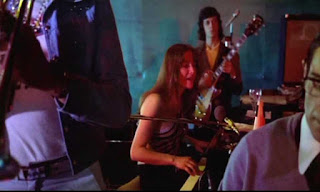 Though it's another sex-and-death story full of jazz, dream state violence, and an apparition of a hanged father that's reminiscent of Paul Muller's scenes in A VIRGIN AMONG THE LIVING DEAD (1971), AL OTRO LADO DEL ESPEJO has the peculiar feel of a unique genus in Franco's filmography. A big part of this is the principal casting of  Emma Cohen as the protagonist Ana. This was Cohen's only starring role for Franco (she had previously played one of Dracula's brides in COUNT DRACULA, 1970, starring Christopher Lee) and she gives a performance unlike any other in Franco's filmography. Might she have been his only method actress? I can only explain her unique quality by saying that she comes across as absolutely real and quirky (she wears an androgynous tuxedo to a party in one scene), not in the least stylized or unnatural, and also completely present, vulnerable and haunting. It was also startling to finally see her in such enhanced resolution, which revealed a fascinating natural mottling in her green-gray eyes, an iris flaw, to which Franco's camera is most attentive. When she's onscreen, you can't look away from her. 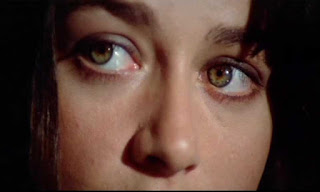 Actor Robert Woods, who plays her first love interest in the film, shared this with me about the experience of working with her: "Emma was, as you said, immersed in the role...she actually won the Spanish equivalent of the 'Oscar' for it... She is truly special and a pleasure to work with... and Jess got the best from her... A truly gifted talent."

Likewise, this film depicts human relationships with a directness and realism, even a warmth, that I think may not be found elsewhere in Franco's work outside of BAHIA BLANCA (1984). Franco shows us the moments when Ana's various suitors fall for her, and he closely attends the tenderness, the tentativeness, that precedes making those feelings known, which makes the direction taken by the story feel all the more tragic and the film, as a whole, all the more brave. On the other hand, this is the only Franco film I can remember seeing where a special effect is employed to magically transform one object into another, which seems at odds with his surrealist sensibilities. Working from a script by his then-wife Nicole Guettard, who also wrote LORNA... THE EXORCIST and CELESTINE, AN ALL ROUND MAID, Franco can be seen experimenting with his own forms almost to the point of becoming a more mainstream artist. 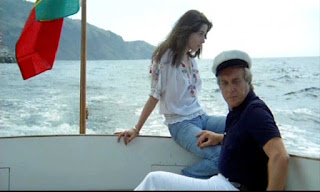 The restoration, supervised by Peter Blumenstock and Derdérian, also brings to the surface a kind of "all the colors of the dark" motif where Ana is concerned, expressed through her rainbow-colored clothes and caftans and even the stage lighting accompanying her jazz band's stage act. Even such a simple shot as one of Françoise Brion gazing out at a swimming pool becomes a deeply appealing study in the primary contrast of red, yellow and blue. 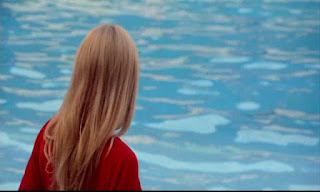 AL OTRO LADO DEL ESPEJO and LE MIROIR OBSCENE are now available for worldwide Blu-ray/DVD licensing, and I hope to bring you news soon about its much-anticipated release. 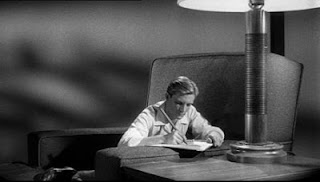 Dear Richard Matheson,
Thank you for pointing the way to my life. I was very fortunate to find you. I pray that your next adventure will be at least as fortunate.
Sincerely yours,
Tim Lucas
Posted by Tim Lucas at Monday, June 24, 2013