12 Unpublished Novels They Wish They Could Read

I found myself in some unexpectedly grand company today, thanks to Joshua Chaplinsky and the folks at LitReactor. My humble thanks -- I suspect your patience and curiosity will be rewarded next year.
Posted by Tim Lucas at Tuesday, September 17, 2013 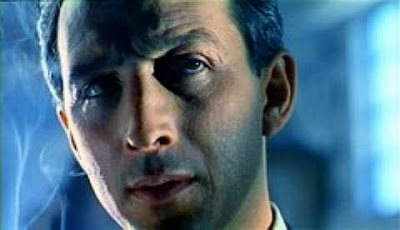 I was just notified by Kathy Brown, who runs the Rosemary Clooney website, of the death last week, on September 3, of actor-dancer Dante DiPaolo, who was the very last person I interviewed for MARIO BAVA - ALL THE COLORS OF THE DARK.

Dante broke into the movies in 1939, as a hoofer, and appeared in a couple of the great MGM musicals: MEET ME AT THE FAIR and SEVEN BRIDES FOR SEVEN BROTHERS. It was during this period that he met the great love of his life, Rosemary Clooney, but they were both married at the time: she to actor-director Jose Ferrer, and he to a Hotel Tropicana showgirl then known as Nadine Ducassay, who later found work in Rome under the names Nadia Sanders and Nadine Ducas. (She went on to appear in a conspicuous role in Fellini's 8½, among other films.) Dante followed Nadine to Rome and was floored when producer Virgilio DeBlasio, who had taken them to dinner to become better acquainted with her, suddenly shifted all his attention to Dante, upon learned he had been in SEVEN BRIDES, then a perennial on Italian television.

Suddenly Dante became a much in-demand actor. He started out as henchmen and villains in such sword-and-sandal films as Riccardo Freda's epic SAMSON AND THE 7 MIRACLES OF THE WORLD (1961), Marcello Baldi's THE SON OF HERCULES VS. VENUS (1962) and Irving Rapper's PONTIUS PILATE and JOSEPH AND HIS BROTHERS (both 1962), but he gave his best performances to Mario Bava's greatest giallo thrillers, THE GIRL WHO KNEW TOO MUCH (1962, as the mysterious reporter Landini) and BLOOD AND BLACK LACE (1964, as the frazzled drug addict Frank).  When the Italian film industry began suffering a crisis in the late 1960s, so was their marriage and Dante returned to the States, where he was able to appear in one last important musical, Bob Fosse's SWEET CHARITY (1969).  He and Clooney reunited in the 1970s and they remained devoted and together for the remainder of her life, with Dante producing her stage act. They finally married in 1997, only five years before her death in 2002. Some years later, he made a few appearances on the short-lived but interesting HBO series UNSCRIPTED, co-produced by his nephew George Clooney, playing an actor named Dante (a clip from THE GIRL WHO KNEW TOO MUCH was used to touchingly illustrate his former screen career).

Dante gave some of the very best, most nuanced performances found in Bava's films -- he had the goods to have become a first-rate film noir star -- and I was so pleased to be able to interview him and get some of his memories into the book. During our talk, I mentioned to him that THE GIRL WHO KNEW TOO MUCH had been reworked into a light comedy, which completely surprised him. I arranged for him to see it, and we also sent him a gift copy of the book, which he told me made him feel tremendously proud -- and also happy for Mario, whom he considered a hugely underrated talent. At the time I interviewed him, on June 13, 2006, Dante was living next door to his elderly mother, who was dependent on his care (even though he was then 80!), and sharing an apartment with none other than his first wife. I'm told that his mother lived to be 100, but did predecease him. He cared for her as he had cared for Rosemary through her final illness.

Here's to you, Dante! My book would have been grievously incomplete without you, and I'm grateful for your work, your input, and so glad we got to touch base.
Posted by Tim Lucas at Friday, September 13, 2013 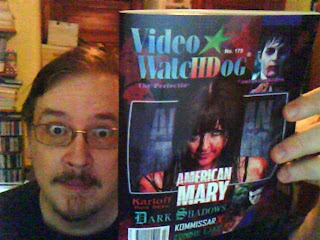 This time, your first look is right here in my hand! Donna hasn't yet updated our website page -- you wouldn't believe how much she's been juggling of late -- but the next issue is already printed, here at Chez Watchdog and it will be shipping soon! Among the contents in this exciting new issue...

RAMSEY'S RAMBLES by Ramsey Campbell
WE NEED TO TALK ABOUT KEVIN 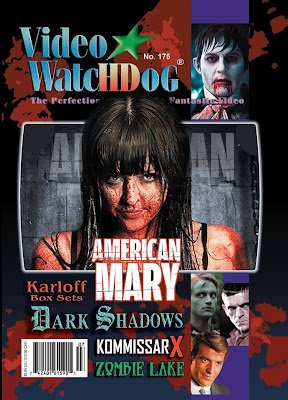 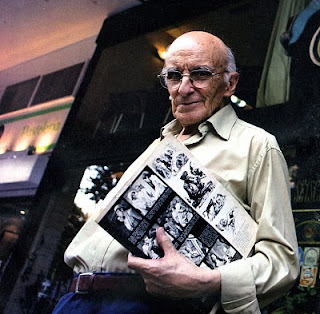 Spanish writer-director José Ramón Larraz has passed away at the presumed age of 84. News of his hospitalization was circulated a week or two ago, but no cause of death has yet been announced. Horror fans who came of age in the 1970s remember Larraz as one of the most exciting new European voices of that decade. He began his career as a graphic artist and cartoonist. Like his compatriot Jess Franco, he left Spain at the height of Franconian oppression to create his art under freer conditions; unlike Franco, who gravitated to France, Larraz went to London. His works, marked by morbid themes and often explicit violence and carnality, include WHIRLPOOL (1970, possibly the first X-rated horror film released in the United States -- released one week before Franco's EUGENIE... THE STORY OF HER JOURNEY INTO PERVERSION -- and an obvious influence on Wes Craven's THE LAST HOUSE ON THE LEFT), DEVIATION (1971), SYMPTOMS (1975, arguably his best film), the erotic terror classic VAMPYRES (1974, for which he recorded a memorable audio commentary when it was issued on DVD and Blu-ray by Blue Underground) and THE HOUSE THAT VANISHED (1974). He was often credited on these films under such names as J.R. Larrath or Joseph Braunstein. After this, when creative freedom was permitted once again in his country, he returned to his homeland, where he made such films as THE COMING OF SIN (1978), STIGMA (1980), THE NATIONAL MUMMY (1981), BLACK CANDLES (1982), REST IN PIECES (1987) and DEADLY MANOR (1990), which did not receive the same level of international exposure. He was the recipient of the Lifetime Achievement Award at the 2009 Sitges Film Festival and the subject of a documentary, ON VAMPYRES AND OTHER SYMPTOMS, directed by Celia Novis in 2011. A major figure, whose passing comes as a major loss to Spanish culture, especially as it follows so soon the recent deaths of Jess Franco and Bigas Luna.
Posted by Tim Lucas at Tuesday, September 03, 2013