Last night I treated myself to an evening of forbidden Swedish cinema (forbidden in the sense that it's not commercially available here), beginning with Mai Zetterling's bizarre NIGHT GAMES (Nattlek, 1966), a film which won some stateside notoreity when Shirley Temple resigned from the board of the San Francisco Film Festival when they refused to bar the film - which she considered obscene - from exhibition. It's a garish film to be sure, aggressively weird in that faux-Fellini way, and it contains at least one scene (between Ingrid Thulin and the young actor playing her pre-pubescent son) that would never be permitted today, but as the point of the story became clearer, I found it winning me over to its side. This started happening when I realized that the film had been the missing visual link - in my own cinematic education - between Losey's THE SERVANT and Cammell and Roeg's PERFORMANCE; like those films, NIGHT GAMES is about people who don't get enough sunshine, whose homes fester into a second skull housing their increasingly baroque and dangerous games of cat and mouse. Made pretty much exactly between those two films, we can clearly see ordinary decadence becoming both sick and psychedelic here. 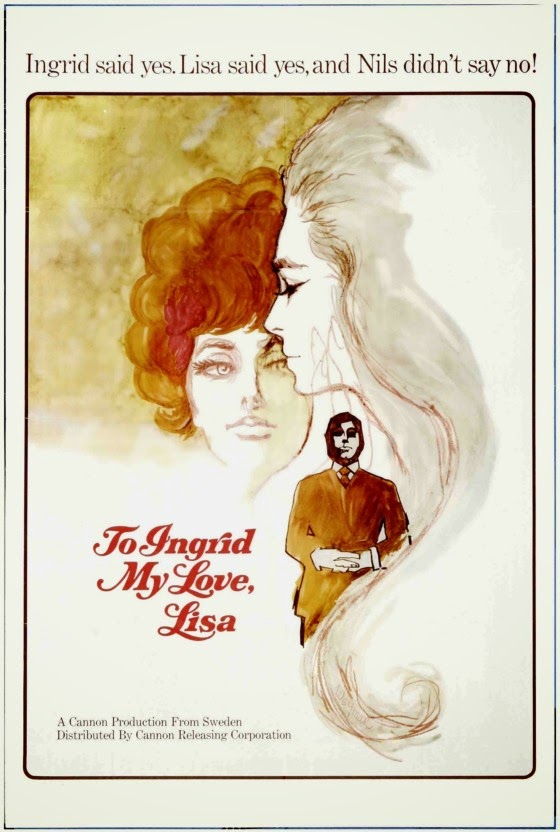 Secondly, I watched Joseph W. Sarno's YES (shot 1966, released 1968) - which I believe was shot under the title THE MANNIKIN but was later retitled TO INGRID, MY LOVE, LISA (under which title it's actually available from Something Weird Video). It's the story of Lisa, a bisexual fashion designer who falls a bit too conveniently in love with Ingrid, the shy, lanky blonde farm girl next door after moving into a new house. She lures her into a modelling job in an effort to seduce her, but Ingrid is so pleased to be away from her inexperienced boyfriend in the country that she starts sleeping with every man she can find. In the end, Lisa does have her way with Ingrid, but afterwards, as if having repaid her gratitude to Lisa, Ingrid gets up, gets dressed and flees the scene, leaving Lisa in tears - and then goes outside, where (in view of a church, no less!), she takes the hand of the first man she meets, as if desperate to prove to herself that she's not queer.

YES turned out to be conspicuously different to the Swedish-language version I'd seen before. Kvinnolek (which I'm told means "Girl on Girl" - not to be confused with his 1974 Marie Forsa film GIRL MEETS GIRL) is not just different in the musical way that INGA (made immediately before it) is different to its Swedish version. It's nearly a 10 minute difference. Kvinnolek includes several scenes that weren't in the copy of YES I watched:

1) In the first party scene, a blonde guest on the dance floor strips down to her panties and dances until one of the male guests carries her off and throws her on a bed;

2) Ingrid visits Lisa's office and makes the acquaintance of one of her male business associates, whom we subsequently see (even in the YES version, with omits their meeting) dating and making love;

3) After Ingrid seduces a member of a rock band and tires him out, she redresses and takes to the street in frustration where she meets another man within view of a church, who takes her to his apartment, removes her dress and begins making love to her (if this sounds familiar, it's because the US version removed this portion and used the first part to create a more conservative finale);

4) Kvinnolek includes a brief night exterior of Ingrid running toward camera down a street, but omits the set-up for this shot found in YES, where she is accosted by two drunken men after leaving the previous man's apartment - the scene humorously plays itself out with two louts deciding they are happier with each other than chasing a broad;

Finally, the climactic lesbian scene between Ingrid and Lisa unfolds differently in the two versions. In Kvinnolek, their initial standing kiss cuts to a full length shot of the two women, covered by a white sheet, then the scene cuts to them in bed, Lisa kissing Ingrid's face everywhere but on the mouth. Then, the scene fades to white (a most unusual touch for 1966) and we see the two women waking together and having what appears to be - it's in Swedish, so I can't tell for certain - a happy, conciliatory conversation which then fades to black as the exit music plays.

The scene, as it plays in YES, adds in roughly a full minute of graphic yet non-explicit footage of two body doubles sucking and grinding away, and then fades to black before fading in to Ingrid's awakening and furtive departure. I couldn't help wondering if this was the only instance where Sarno recut the US version of one of his Swedish films to make it both more sexually explicit, yet at the same time, more sexually conservative?

Catching Up With Five Mean Years 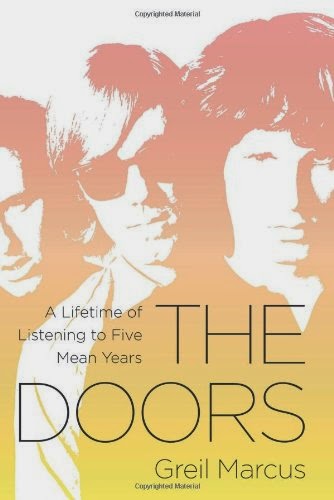 Last week, I decided to fill a gap in my Greil Marcus collection by acquiring his book THE DOORS : A LIFETIME OF LISTENING TO FIVE MEAN YEARS, which I was able to pick up in hardcover from an Amazon Market seller for the princely sum of one penny, plus $3.99 postage. Though I was cautioned that the book was used, upon opening the package, I found the book not only in mintish condition but the dust jacket bore an "Autographed Copy" sticker. I couldn't believe it, but I looked inside and, sure enough, there was the great man's signature, looking for all the world like a length of pliered wire.

Last night, I finished it. Like a number of its readers, I was somewhat disappointed. The entire book, short as a lark, appears to have been prompted by Marcus' listening to the now-out-of-print 4-CD Rhino Handmade set BOOT YER BUTTS!, which I don't have and have never heard; it was widely condemned for its poor sound quality but he makes it sound spottily appetizing and in some instances astounding - so he put me on the scent for a copy. As always, Marcus is a stimulating thinker (when he makes the otherwise unacceptable comment that "Not To Touch The Earth" is "musically incoherent," I have to stop and evaluate precisely what he's saying) and I admire all that he ropes into the discussion, but though Marcus has always lead me on topics like Bob Dylan, I felt he had less to teach or offer me about these guys. And his project is further handicapped because he only seems to admire certain aspects of the Doors' recorded works whereas I find much to value in those middle albums he has no use for. If anything, I much prefer those to the drunk tank blues of L.A. WOMAN, which he likes more than I do. I was glad we were agreed on the Oliver Stone film, though, which he made me want to watch again. 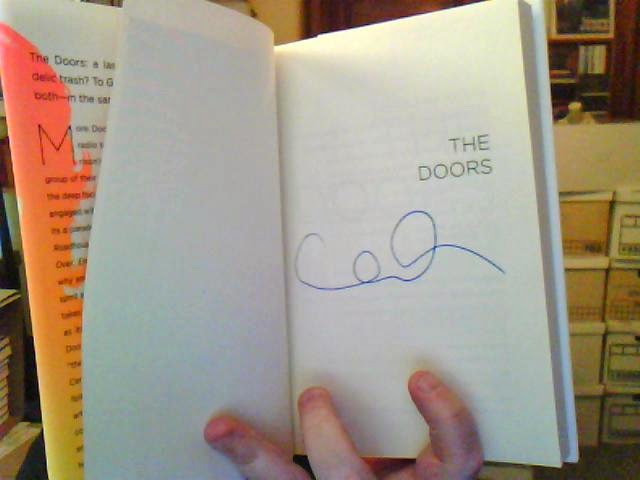 Good deal for a penny, though. Try your luck. 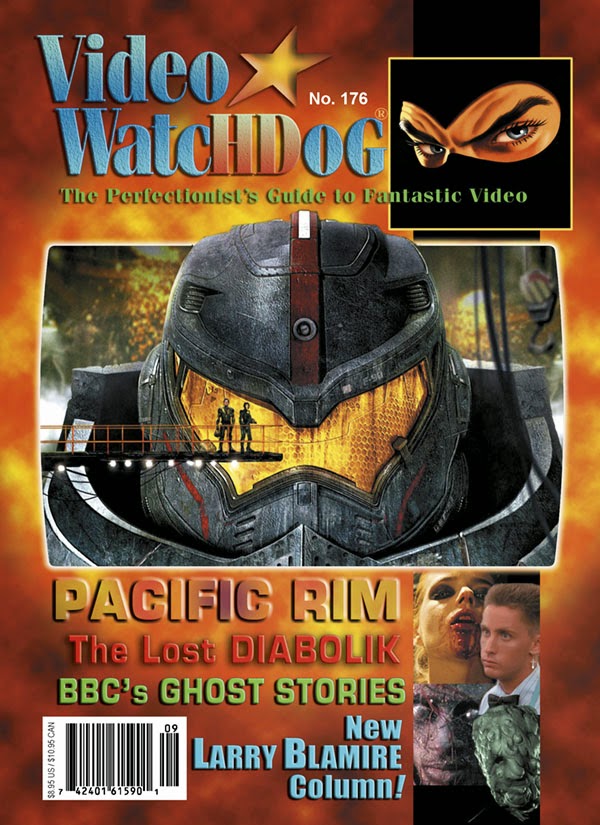 Now at the printer! We'll start shipping when it returns in a couple of weeks.
Posted by Tim Lucas at Saturday, March 29, 2014

Producer Jeffrey C. Hogue has written to inform me of the passing last week of Swedish-born writer-composer-director Calvin Floyd. He is best remembered in this country for his documentary IN SEARCH OF DRACULA (1975, narrated by Christopher Lee) and probably the most faithful of all Mary Shelley adaptations, the Swedish-made TERROR OF FRANKENSTEIN (aka VICTOR FRANKENSTEIN, 1977).

Among Floyd's other films are a production of FAUST (1964), the crime thriller CHAMPAGNE ROSE IS DEAD (1970), and the period suspense film THE SLEEP OF DEATH (1980).

Calvin Floyd was 82. He is survived by Patsy Impey (his companion of 25 years), and also his son and daughter. 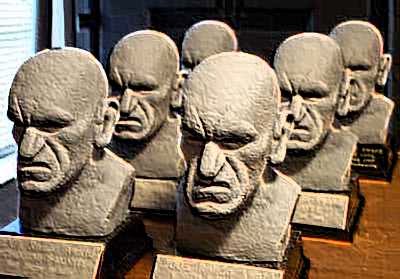 Mind you, I - as well as a good many other worthies - are also eligible for two write-in categories: Best Writer and Best Reviewer.

Congratulations to Bill, Ramsey, Doug and Charlie on our team, but also to ALL the nominees and their worthy products and projects!

Donna and I would certainly appreciate your votes, but most importantly, just get involved and make the results better informed with your participation!

You can find the ballot here: