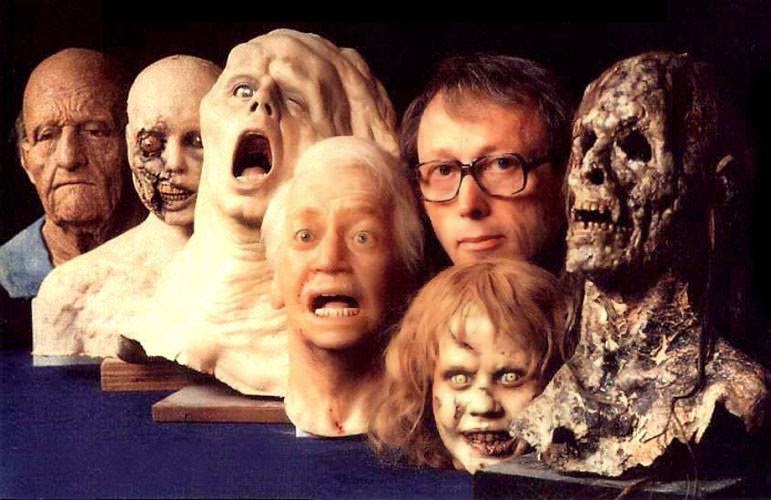 Dick Smith - the cinema's most important makeup artist since the immortal Lon Chaney - has passed away at the age of 92, leaving behind him a treasure trove of character and horror makeups whose imagination and scientific detail were truly indistinguishable from magic: LITTLE BIG MAN, HOUSE OF DARK SHADOWS, THE GODFATHER, THE EXORCIST, ALTERED STATES, THE SENTINEL, GHOST STORY... and so many more. As many of the stories being repeated today confirm, he was also one of the great gentlemen of the business. This - I'm happy to say - I got to experience, a few times, by telephone.

I had the pleasure of interviewing Dick a couple of times, back in the 1980s and 1990s - first in relation to an uncredited favor he did for his protégé Rick Baker in relation to David Cronenberg's VIDEODROME (in the basement of his home, he and Steve Johnson took a full body cast of Deborah Harry for a scene that was ultimately not filmed), and then again as Donna and I were preparing VIDEO WATCHDOG's sixth issue, devoted to THE EXORCIST - an issue whose impact directly led to the publication of Mark Kermode's BFI Modern Classics books on the film, his documentary on the making of the film (which appears on the DVD and Blu-ray of the film, and William Friedkin's own "The Version You Thought You'd Never See" recut. 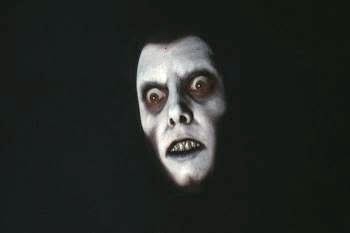 While interviewing Dick for a VW piece about the film's subliminal imagery, I asked him about this now-famous facial makeup done for THE EXORCIST. At that time (in 1990), he had - or, I briefly suspected, pretended that he had - no recollection of it, because the moment had the aura of a secret that wanted to be kept, and no one had really explored this aspect of the film in it's nearly 20 years of release. I explained that it was a subliminal image, something I had first seen pop out at me in a darkened theater the day before the film officially opened in December of 1973; I promised to send him a copy of the image to examine and comment on. To get one, I had to freeze-frame my VHS of the film, sit in front of my analog television set, and shoot a whole reel of film of the image, hoping to get just one that wouldn't have "roll bars" interfering with it - this was long before digital frame grabs. It worked - and I was later also able to pull some other shots of the makeup (not in the film) from a rare 16mm reel of withdrawn TV spots.

When Dick saw the images, he remembered doing the makeup and - something I'll never forget - he congratulated me on the acuity of my vision, one of the nicest compliments I've ever received, considering from whom it came. William Friedkin separately had identified the actor wearing the makeup to my co-author Mark Kermode as Eileen Dietz - this was something not previously known, though Eileen's participation elsewhere in the film was well-known at the time; Friedkin said that the "Apparition" image, as he called it (which I dubbed "Captain Howdy" because this is how Regan identifies the voice inside her elsewhere in the picture), was actually that of a demon test makeup that "didn't work" in its intended use on Linda Blair, but which he later decided might have power if used onscreen briefly.

Mark and I were not at all sure, given its crude, high-school theatrics look, that Dick had done the makeup, but he did admit to doing it, explaining that it was something done in relative haste and not really agonized over. It wasn't anything meant to be seen clearly. He remembered it appearing in the film only once, in a brief scene where the Apparition was double-exposed onto the face of the rotating head model, giving it the brief appearance of literal possession as Regan's room was shaking and quaking - which he considered "probably the most terrifying image in the picture." He was genuinely surprised to learn that it had appeared elsewhere in the movie.

We published the Captain Howdy image for the first time anywhere back in June 1991, and it has since gone on to be paused on countless VCRs and DVD players, to appear on T-shirts and even album covers. But seeing it linger in a still frame is quite different to having it flash out of you in the dark of a big-screened theater. Though it was a makeup that Dick Smith had literally done so quickly that it was instantly forgotten as he pursued some other on-set challenge, it has gone on to become one of the most famous horror images of all time, and I'm sure - in retrospect, and rightfully so - one of his proudest accomplishments.

See also this earlier blog entry about the origins of Captain Howdy.
Posted by Tim Lucas at Thursday, July 31, 2014 What is your idea of perfect happiness?
Those moments when I feel outside of time - when I'm engrossed in reading a book, watching a film, looking at a painting, or gazing at the ocean; when I feel lost (and found) in conversation, or kissing; when I'm caught up in the urgency of writing something beautiful and true.

What is your most marked characteristic?
Productive.

What do you consider your greatest achievement?
MARIO BAVA: ALL THE COLORS OF THE DARK.

What is your greatest fear?
Losing my wife. That, and being conscious during my cremation.

What historical figure do you most identify with?
Tim Lucas.

Which living person do you most admire?
Donna Lucas.

Who are your heroes in real life?
Writers and artists and filmmakers too numerous to mention; their fabulous muses; good mothers; people who care for animals and the aged.

What is the trait you most deplore in yourself?
Need.

What is the trait you most deplore in others?
Dishonesty.

What is your favorite journey?
A correspondence.

What do you consider the most overrated virtue?
Success.

Which word or phrases do you most overuse?
Hello. What?

What is your greatest regret?
Not believing enough in myself; not speaking French.

What is your current state of mind?
Impatient.

If you could change one thing about your family, what would it be?
My parents... but this would also change me - and so, having already survived the hand I was dealt, maybe not.

What is your most treasured possession?
My manuscripts.

What do you regard as the lowest depth of misery?
Unrequited love.

Where would you like to live?
A clean and spacious house, large enough to hold everything without a hint of clutter, conveniently located in a cheerful, interesting neighborhood, in a country with a good health care system.

What is your favorite occupation?
Writing.

What is the quality you most like in a man?
Reliability.

What is the quality you most like in a woman?
Reliability. 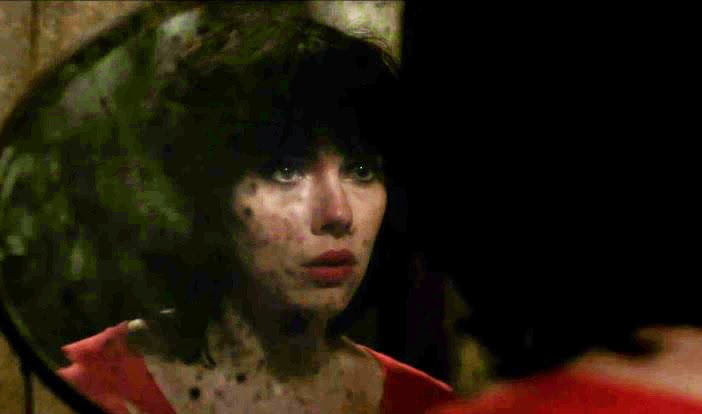 This new science fiction film from the UK was way oversold to me. There is quality here, a very watchable, occasionally engrossing technique of style and subtraction, but the serial monotony of the story - a female of extraterrestrial origin lures a series of men into an apartment that traps and absorbs them (think the scenes in Adjani's apartment in Zulawski's POSSESSION played out on black Astaire-Rogers studio floor) - should have more substance or purpose. The old saw about the alien who finds themselves becoming more human after prolonged wearing of their human skins also gets played again, and the film is basically reducible to an abstract remake of JAWS in which the shark ultimately gets eaten. Jonathan Glazer's directorial stance withdraws from the story to a point that initially seems godly but is ultimately atheistic. I've heard this described as Kubrickian, but there is absolutely none of the poker-faced humor that is Kubrick's hallmark. If anything, there are moments reminiscent of Lynch's ERASERHEAD and these are the moments that make this movie so pleasingly environmental and demanding of larger screen immersion. I did not think Scarlett Johansson was exceptional, but I've always found her competent. Worth a look, but hardly the Second Coming.
Posted by Tim Lucas at Sunday, July 13, 2014 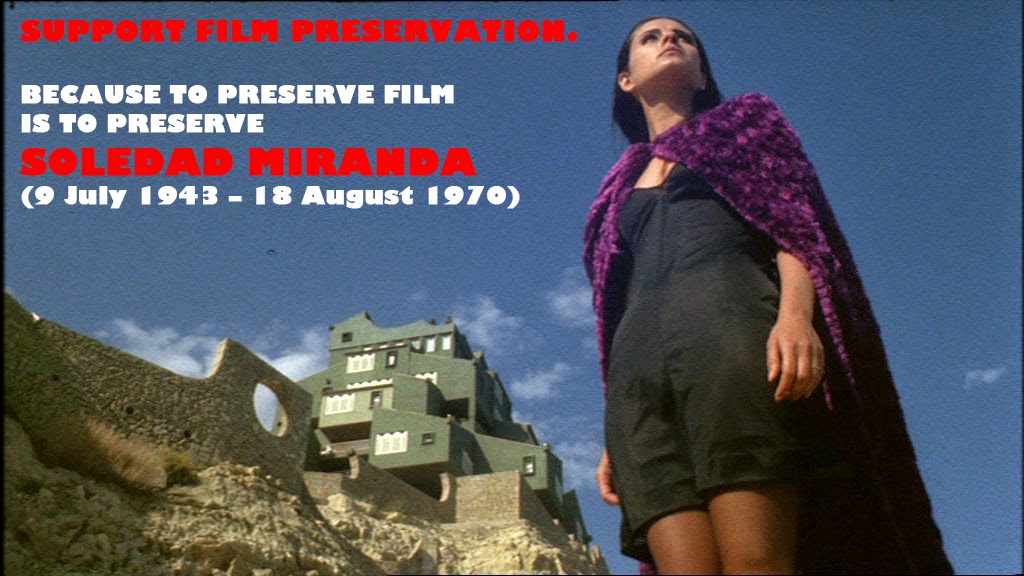 
I got to see Martin Scorsese and David Tedeschi's documentary feature THE 50 YEAR OLD ARGUMENT (about THE NEW YORK REVIEW OF BOOKS) last night - I had to go looking for it online, as it has so far aired only on the BBC. The film's onscreen commentators surprisingly favor the British and Irish contributors to the venerable newsprint journal, and it may well be too intellectual to qualify for broadcast on PBS here in the States - and where else would you find it? But it's a surprising, welcome and often engrossing study of the leading role played by one publication in a time when American life was more involved and stimulating, when our culture was being actively determined by books and writers, by intellectualism, literacy and worldliness - as well as revealing yet another facet of Scorsese's love for the New York of his own life and times. In the 1970s, I was a regular reader of the NEW YORK REVIEW OF BOOKS and probably a happier person for it; Scorsese and Tedeschi made me feel guilty for falling off the wagon. One speaker in particular reminded me of the importance of reading and responding to the work of one's own time, because literature is a dialogue; it is involvement and interaction that keeps literature vital and moving forward. No one should ever fear of writing the first book to be read by no one.

I found particularly engrossing a segment concerning Joan Didion's NYROB essay about four young black men arrested in connection with a series of Central Park rapes, and how they were subliminally pre-judged in the mainstream press by the introduction of the biasing term "wilding." So well did this word work on the fears of the city's influential white populace that the suspects were identified in the press with their full names - including that of one 14 year old later forensically proved innocent. Didion recalls that working with NYROB editor Robert B. Silvers increased the length of her essay by three-fold. I only vaguely recall the case, but I found this almost scary in its prescience, as our politicians now use similar tactics all the time in the press, against one another and against other countries, biasing the public with their loaded lingo. Didion is not only interviewed but shown reading from her essay.

When the film ends, you may feel appalled at the emptiness of our time, how our lives have become engulfed not only by ungrounded images, but images taken at face value in media that continually grows more tyrannical without context and without that grounding in an engaged and informed, conscious dialogue. Life should not be processed in clicks.
__________

According to VARIETY, THE 50 YEAR OLD ARGUMENT will debut on HBO on October 6. Not a likely outlet for this sort of programming, but bravo to them.

"In light of your blogpost today, you may be interested to know the CP5 [Central Park 5] were finally (FINALLY!) exonerated... http://www.nytimes.com/2014/06/20/nyregion/5-exonerated-in-central-park-jogger-case-are-to-settle-suit-for-40-million.html?_r=0