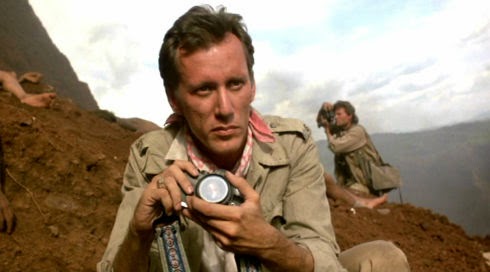 I've always remembered SALVADOR (1985) - now available as a limited edition Blu-ray disc from Twilight Time - as Oliver Stone's best film, but last night's revisit found it not aging so well. The early scenes set in San Francisco, introducing rogue journalist Richard Boyle (James Woods) as someone whose personal life is spiralling out of control, seemed so nakedly contrived and phony (in that special pastel way so many 1980s films seem to be) that it set up the question, "If the scenes shot in your own country seem unbelievable, how is this going to fare any better once we get to El Salvador?"

Well, I found much of the El Salvador material overly contrived as well. Stone can't be faulted for not warning us - we're told that the characters have been fictionalized up front - but there is fictionalizing that is done with delicacy to lure the viewer to truths underlying characterization, and then you have composited caricature, which is closer to what we have here. In the plus column, John Savage steals every scene as photojournalist John Cassady - by becoming his character rather than aspiring to a grand slam, and Cindy Gibb gives her role as an ill-fated American nun exactly what the film needs to make her eventual loss emotionally resonant and calculable. What I remembered as a strong, possibly career-best, performance by James Woods is basically James Woods giving us more James Woods than we need to decide for ourselves whether or not Boyle (Stone's co-screenwriter, incidentally) is an asshole; the whole movie seems pitched to confirm this, even in so many words, and his tendency to overshoot the mark draws more comic attention to himself than to the sober intentions of the movie. It can't be denied that SALVADOR contains some powerful scenes, but almost without exception what makes them powerful is the grim requiem music played over them and the viewer feels imposed upon by music that requires a rote response.

Toward the end of the picture, a lot of scenes start ending with dissolves all of a sudden, indicating a much more protracted fleeing from El Salvador in an earlier cut than we're given, which is grueling enough. The agony of these final scenes depend on the film having established the authenticity of Boyle's love for the Salvadoran woman Maria (Elpidia Carillo), which it takes pains to do, but having Boyle return to the Catholic church for the first time in 30 years, confessing his ruinous sins to a priest for a pittance of a penance, but Woods can't help playing these scenes for too much of a laugh, so the film is ultimately deprived of the unbearably heart-rending finale it was aiming for. As it is, it's what we might adequately term a downer.

There is a great film in here somewhere, and it resides in the Stone-Boyle script, which uses Boyle's self-destructive spiral and his self-serving retreat (with pal DJ Rock, played by Jim Belushi as a walking, talking, smoking, drinking, whining pig pinata of American consumption and greed) into El Salvador as one of several foregrounded metaphors for a corrupt America's contribution to El Salvador's violent instability. The implication with Boyle's character is specifically what the film says pointedly when the Sandanistas ride into town on horseback, overthrow the local military base and start performing executions in the public square - that the solution is no better than the problem. Boyle thinks he's making a difference by drawing attention to this conflict, but he's really looking for a second chance - not even that: another way out.

This release marks SALVADOR's Blu-ray debut, and high definition lends impressive depth and detail to the film's compositions, and the 5.1 audio is wildly directional when it counts. Limited to the usual 3000 copies, Twilight Time's Blu-ray disc includes the 62m making-of documentary and 25m of deleted scenes included with the previous 2001 "Special Edition" DVD release from Fox Searchlight. Exclusive to this release are an isolated track of Georges Delerue's score, and a new audio commentary by Stone. I've not yet dipped into these extras, but I am interested in doing so. The film may have dated into more of an argument than it used to be, but it's still an argument worth having - and this disc comes to the debate generously prepared.
Posted by Tim Lucas at Saturday, September 20, 2014 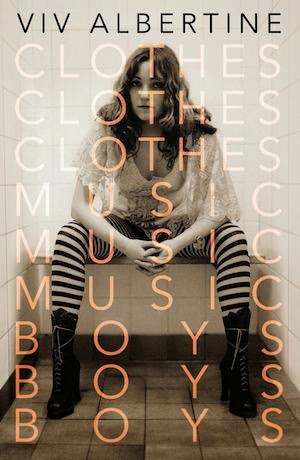 I blasted through Viv Albertine's memoir CLOTHES CLOTHES CLOTHES MUSIC MUSIC MUSIC BOYS BOYS BOYS like a box set of my favorite teleseries. The chapters are short (short enough for the reader to keep thinking, "I can read another and THEN go to sleep" until the sun comes up) but profound nonetheless, piling up into a potent, endearingly candid overview of a life in search of its own meaning.

The book is divided into two "sides," like an album, each side documenting the slow and sometimes grueling climb toward an achievement of artistic expression which for that period redefined Viv - namely, the short reign of the Slits and her decision, after sixteen years of marriage to a not entirely supportive husband, to reclaim her identity as a musician - which she in fact improved upon, reinventing herself as a fairly unique (and still musically innovative) minstrel of the joys, sorrows, ironies and bitter absurdities of female middle age experience. Much of the book also details her quest for love, which - unusually for any book on the subject - differentiates between her experiences of men who generated in her feelings of sexual attraction, intoxication and/or tension; it also includes some heartbreaking descriptions of her debasement at the hands of men who abused her physically or emotionally (my characterization, not necessarily hers), beginning with an abusive father who may have predisposed her psychologically to be attracted to disrespectful men and outright nutters (ditto). Yet the book's most personal and powerful episodes are those about her determination to overcome terrible, graphically described physical ordeals to become a mother.

I've known women with similar backgrounds and must consider this book an absolute success because I closed it feeling as though I'd known Viv her whole life - as a child, as an idealistic and adventuring teenager, as an earnest guitar student and ever-striving recording artist with the Slits, as a dreamer, as a woman, wife and mother, and as the reborn artist - body and soul, partly because her writing is so acute and her self-exploration so thorough and unsparing, that she takes one not only into her confidence but into her self. Her documentation of what she experienced emotionally as the female lead in the film EXHIBITION is the most honest description of the acting process I've read by a contemporary actress. As for her coverage of the Slits, it's everything I wanted from the TYPICAL GIRLS biography (which I didn't feel fully delivered, though it covered more ground), though it does skimp a bit on Budgie's contribution/departure and the second album - which Viv describes as being an advance on the first in some ways, something I would have liked to hear more about.

In fact, if this book is lacking anything, it is descriptive appreciation of the music that inspired Viv and made her want to become a musician, and specifically a guitarist - and its value to her is made more mysterious when she claims that she didn't listen to music for 25 years after leaving the Slits. (Her husband preferred that she leave music behind, to focus on family, and she also says it reminded her too much of her foiled ambitions.) Perhaps her muse was more environmental than musical, aroused in her by a desire to make sense of the clothes and boys that attracted her in the first place, to belong to the excitement they generated in her, but Viv was certainly in the right place and in the right company to seize the opportunity and she used it to make a contribution that was significant then and continues to be.

Above all, CLOTHES/MUSIC/BOYS is a human document about a talented but unsure woman struggling with the voices and forces in her life that would prefer that she conform to them, rather than address (much less fulfill) her own potential, and finally finding the center of strength and larger network of support that begins to make this possible. In its telling, it exposes so much below the author's steely but tender surface as to expose most other musical autobiographies as so much show business.

Out now in the UK, with a US edition coming in November.
Posted by Tim Lucas at Sunday, September 14, 2014


I imagine that Joan Rivers left this plane as she would have wished, fresh from making another audience laugh, without knowing what hit her, and looking considerably less - or at least considerably other than her 81 years. David Del Valle reminds me that Joan was a fellow talking head of ours on an episode of A&E's BIOGRAPHY devoted to Vincent Price, which aired the week he died - so there was a connection there, which I'd forgotten. I admired her when she started out, when her comedy was based in things she had in common with her audience, when half the battle was getting laughs from the shock of recognition and when she let her vulnerability show. But as comedy changed, in its determination to reflect the world around it, she changed too, and the rewards that should have come with her success and longevity were not always forthcoming. She became more manically aggressive in her comedy and there was something about the grating, in-your-face caricature she became that, to me, was ripe with bitterness and a determination to outlast all those other bastards out of sheer cussedness. There is a poignant arc to her story, which is the story of a qualified artist surviving in a traditionally alpha male business, and I imagine it will be told and examined from more than one angle in years to come. She was not always my cup of tea, but she had my respect. She was one strong lady.
Posted by Tim Lucas at Thursday, September 04, 2014