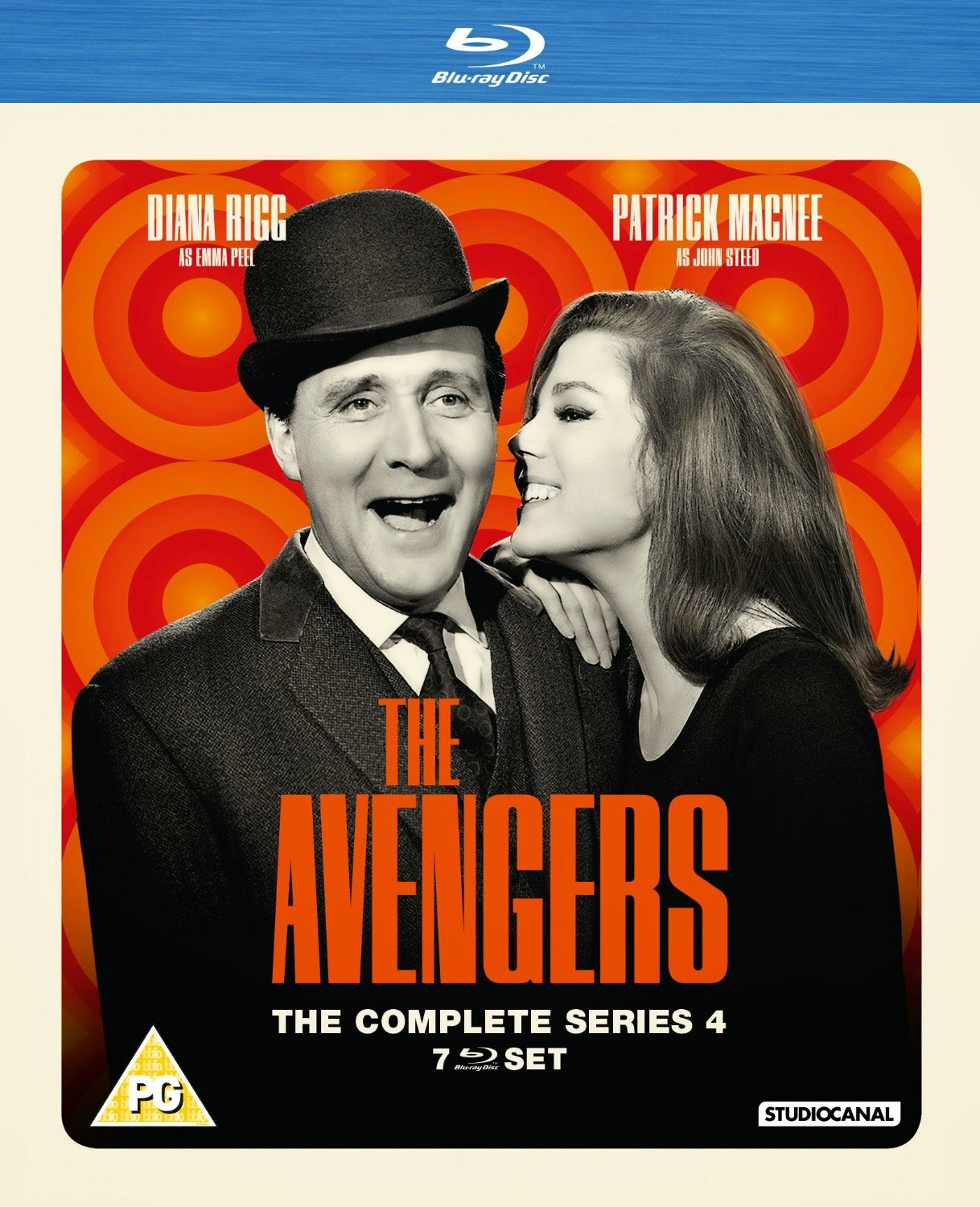 A strong case could be made that everything for which ABC Television's THE AVENGERS is best remembered can be found in its fourth season, filmed in 1965 and aired in 1965-66. This was the first season to be shot on film (35mm black-and-white), the first season that Patrick Macnee's John Steed shared with co-star Diana Rigg as Mrs. Emma Peel, and the first season to be creatively supervised by chief writer Brian Clemens - who, when he passed away last month, was incorrectly and yet very correctly identified in many obituaries as the "creator" of THE AVENGERS.

Season 4 is a remarkably consistent collection of first-rate episodes. When watched sequentially after the earlier videotaped episodes featuring Honor Blackman as (Mrs.) Cathy Gale, they constitute a quantum leap in production quality as well a modest, perfectly measured leap into fantasy and surrealism. Though these espionage stories never quite step outside reality, they delve joyfully into the myriad byways of British eccentricity and modish design that places them firmly in a tradition that includes Lewis Carroll and J.M. Barrie as well as Ian Fleming. This particular season can be seen, in retrospect, as the most perfectly balanced of them all, 26 precious episodes made before "the formula" set in.

Here in America, the bulk of THE AVENGERS is unfortunately available only as part of the original Arts & Entertainment box set releases, literally dating from the last century (1999). Meanwhile in Britain, the show's 50th Anniversary was observed in 2011 with the release of a lavish, 39-disc box set, THE AVENGERS 50th ANNIVERSARY COLLECTION, which digitally remastered every episode, introduced episode reconstructions of lost adventures from the first season with Macnee and Ian Hendry, and added a wealth of interviews, related materials and alternate footage, as well as pdf files containing the original scripts for each episode. This remains the ideal one-stop-shop for Steedians and Peelites, but other temptations have followed in the years since. Last November came Lionsgate's surprising Blu-ray release of THE AVENGERS SEASON 5 here in the States - Season 5 being the show's first color season and Diana Rigg's last. Season 5 was an odd place to start, but it was even more peculiar as an American exclusive.

Just yesterday, on February 23, the UK finally took this most venerable and popular of British television series into the realm of High Definition with the release of StudioCanal's THE AVENGERS THE COMPLETE SERIES 4 (7 discs, £57.50 at Amazon.co.uk), which is the ideal place to start - or continue - if you are set up to play Region 2/B discs.

Color is always the selling point for televisions in department store showrooms, but High Definition is about detail - and black-and-white delivers more detail with less chromatic distraction. This is my roundabout way of saying that this set is altogether ravishing. Certain aspects of certain episodes are so clearly delineated as to remind us that these shows were originally seen on modest-sized, low-resolution screens at best, as when Macnee or Rigg are suddenly doubled in their action scenes - Ms. Rigg by a somewhat less curvaceous man in a shoulder-length wig. That said, as Brian Clemens and other series veterans note in their audio commentaries, while the series was intended at the time for smaller screens, it was photographed as if each episode was a feature film - by the likes of Gerry Turpin (SEANCE ON A WET AFTERNOON), Ernest Steward (A TALE OF TWO CITIES) and Alan Hume (KISS OF THE VAMPIRE) with people like Godfrey Godar (TARZAN GOES TO INDIA) and Ronnie Taylor (THE INNOCENTS) operating the camera. The lighting and composition here are basically incomparable to anything else being done for series television at this time. The clarity will have you delighting in the individual hairs on the actors' heads, as well as the sumptuous textures of set dressing and wardrobe that consistently reflect the level of taste shown by the protagonists.

The episodes are presented in their original 1.33:1 aspect ration with English subtitles option only. The set includes more than six hours of extras, carried over from the 50th ANNIVERSARY set. There are several audio commentaries: director Roy Ward Baker and scriptwriter/producer Brian Clemens on 'The Town of No Return" (very informative, with Clemens showing great presence of mind and memory); scriptwriter Robert Banks Stewart on "The Master Minds" (likewise excellent); scriptwriter Roger Marshall on "Dial A Deadly Number" (he's a bit stuffy and badmouths the more fantasy-driven episodes); director Gerry O’Hara on "The Hour That Never Was" and director Don Leaver on the psychologically intense and handsomely designed episode "The House That Jack Built."

"The Series of No Return" is an illustrated audio interview with actress Elizabeth Shepherd (THE TOMB OF LIGEIA) who filmed one and a half episodes as Emma Peel before the production recast the role. It's evident from her comments, from the photos included, and also from Brian Clemens' comments on his audio commentary that Shepherd might have come across as too much in the mold of Honor Blackman and that her enthusiasm and apparent encouragement to add her own two cents to building the character led her to rewrite more of her dialogue than Clemens was willing to concede. Two hour-long television plays starring Diana Rigg are included in full, to show how she came to the producers' attention as a viable alternative.

Also included are "The Strange Case of the Missing Corpse" (a self-contained color promo for Season 5); extensive stills galleries for each episode and some extras; B&W and color footage from "The Golden Key," an 8mm short made for the German market featuring Diana Rigg as an Emma Peel-like spy getting into trouble (less color footage here than can be found on YouTube); variant opening sequences; different main and end titles from different countries; a pittance of newsreel footage documenting Rigg's arrival onset and Magee's wedding; colorized test footage from two episodes;  photo/audio reconstructions of two lost episodes from Season 1; and more.

It is doubtful, considering their rough videotaped origins, that the earlier episodes with Ian Hendry and Honor Blackman would much reward an upgrade to Blu-ray, but - delightful as this package is - it brings with it a lingering regret that a Blu-ray edition of the 50th ANNIVERSARY box set wasn't undertaken as a whole. One feels that one must materialize eventually (especially given that promissory word "COMPLETE" in the package's title branding), and that all this will someday need to be bought again in more definitive plenty. But it's not my job to evaluate this release in accordance with my suspicions or my dreams, only in accordance with what is served up here - and what's served up here gleams like polished platinum.

If you love THE AVENGERS, it's needed. 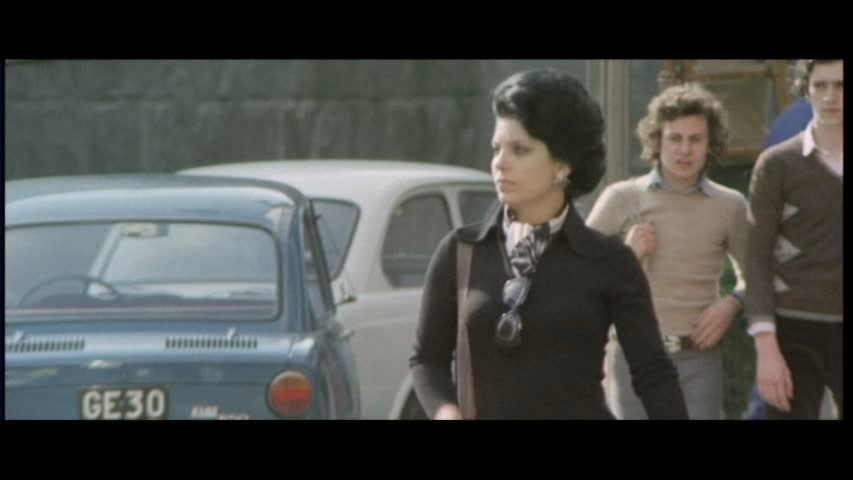 Might I have discovered an overlooked final screen appearance of Italian actress Daniela Rocca (DIVORCE ITALIAN STYLE, CALTIKI THE IMMORTAL MONSTER, ESTHER AND THE KING, THE GIANT OF MARATHON)? 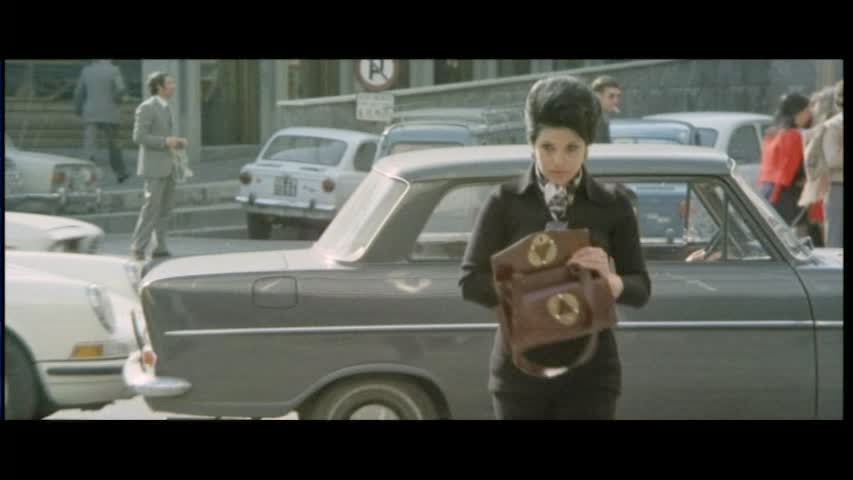 This woman initially caught my attention in the very last scene of Anthony Ascott/Giuliano Carnimeo's THE CASE OF THE BLOODY IRIS (1971) because I thought she might be someone else. It's a nothing part - she simply crosses the street, places a call, and that's that - but she's not photographed like a nothing actress. 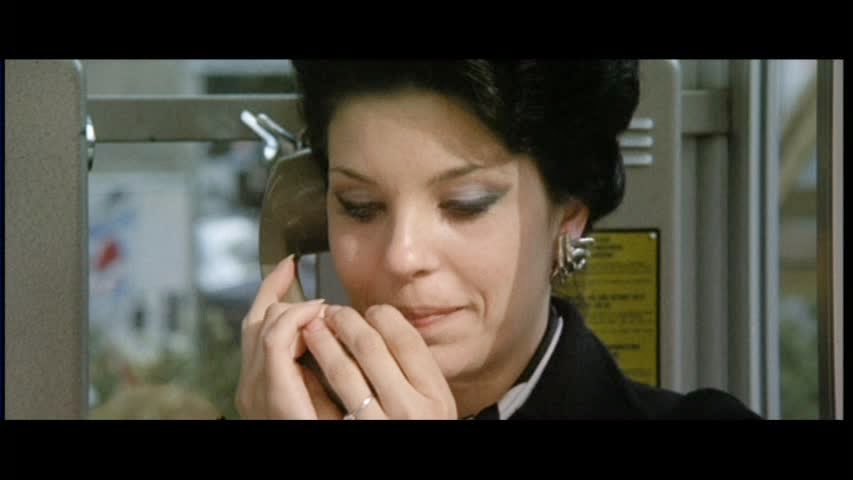 On closer scrutiny of the scene, I realized this woman wasn't the actress I initially suspected, but she continued to look very familiar - and then it clicked. 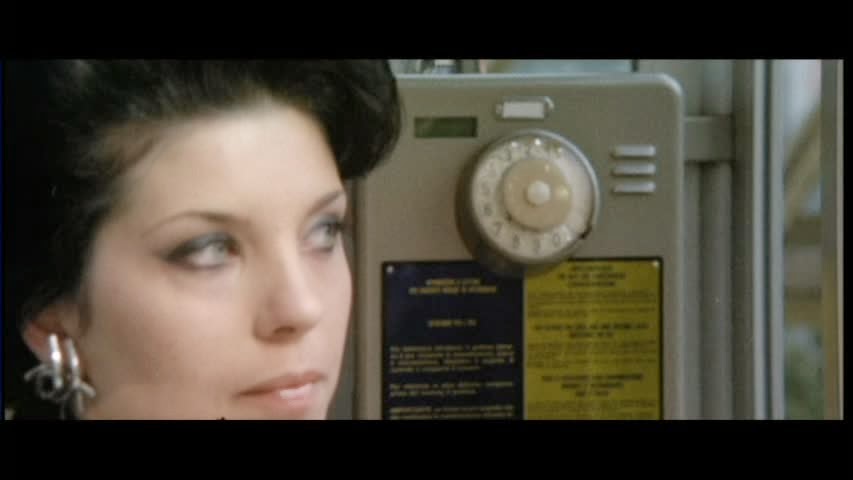 According to the IMDb, Daniela Rocca starred in a film opposite Pierre Brice (UN GIORNO, UNA VITA) just the year before, so how odd it would be to place her in a cameo here!


Previously circulated in a somewhat longer black-and-white cut called THE DIADEM, DER GOLDENE SCHLUSSEN ("The Golden Key") is the shorter - and tighter - color version of a short film that Diana Rigg shot for the German 8mm market sometime in 1967 or thereabouts. She's not really Emma Peel here, but she does play some sort of karate-wise female spy beset by assailants in stocking masks. What I find fascinating about this somewhat rickety project is that it shows how important the whole AVENGERS production unit was to creating the pop phenomenon that was Mrs. Peel, above and beyond the contributions of Ms. Rigg herself. On THE AVENGERS, she is sheer magic; here, in a similar role, she shows her limitations. Without Steed, without sparkling dialogue, without perfectly controlled wardrobe, makeup, hairdressing and cinematography, and (to say the least) without expert direction, we are left with a very special, delicate and exposed dramatic instrument that, without the support to which she (and we) are accustomed, is not quite able to create a believable character or hold her usual share of our interest.

Next week, I'll be reviewing here StudioCanal's new Blu-ray of THE AVENGERS - THE COMPLETE SERIES 4, which streets in the UK next Monday, February 23. 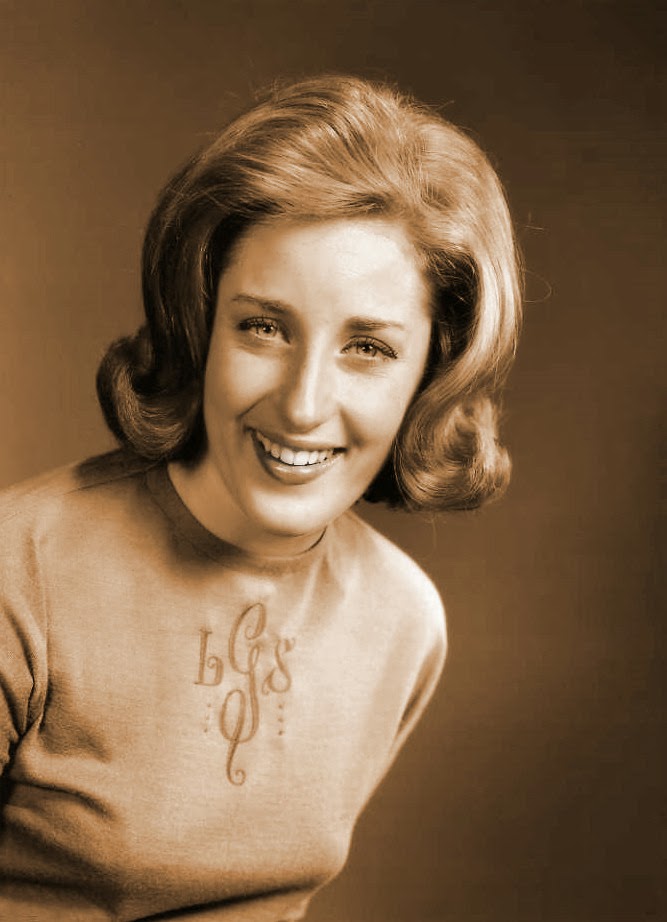 It's ironic to think that Lesley Gore - an important pioneer in the maturation of the pop song, who died of cancer this morning at the age of 68 - was always most famous for a song that she recorded at the age of 16, but even "It's My Party" was unusual. It was an upbeat song about heartbreak whose lyrics included a deft sketch of teenage cliques and how they work - and, if you listen closely, there's an admission there of how manipulative and cruel to other girls some girls can be. It was a huge hit and was followed by what might be the first pop song sequel - "Judy's Turn To Cry" - which made pop songwriting suddenly available to narrative continuation (thus a stepping stone toward the so-called "rock opera") and returning characters. As I look back over my early life as a music listener, Lesley Gore's was the first voice I heard speak to my generation from a female perspective of anything more complex than loving that man or wishing she was married. She didn't write these songs - it was only later that she began to compose songs with her brother Michael - but as an artist, she somehow attracted songs that expressed her and her own outsiderly experience. This allowed the pop song to mature in subtle ways, allowing in deeper subjects like romantic rejection, living with hurt, living a lie, and a woman's right to personal autonomy. "You Don't Own Me" (written, incidentally, by two men) is a defining moment in the maturation of the teen anthem. (People don't remember that it was the #2 song in the country when The Beatles' "I Want To Hold Your Hand" - a far more elementary love song - ruled the charts.) Even when she sang songs about the traditional boy/girl dating experience, she introduced something that cut a bit deeper - "Maybe I Know," for example, describes the masochistic futility of remaining attached to a serially cheating man, and the philosophical shrug of "That's the Way Boys Are" says something more heartbreaking under its surface, underscored by a thrillingly bittersweet chord change, than it does on top. Allison Anders' often moving film GRACE OF MY HEART (1996), a feature-length fictionalized distillation of 1960's pop history, featured an original song by Gore and a poignant character inspired by the closeted gay songstress that she was. She finally came out in 2005, and she is survived by her partner of 33 years, Lois Sasson.
Posted by Tim Lucas at Monday, February 16, 2015