The news of Christopher Lee's passing last Sunday, of accumulative respiratory problems and heart failure, at the age of 93 summons forth a flood tide of memories - most of them from a lifetime of sitting in darkened theaters, awed by his imposing presence. He was one of the true Titans of the screen. Even as a man, the people who met him often spoke of having been in the company of someone not only 6' 4" tall, but larger than life. "He was like a real lord," Daliah Lavi told me, while discussing their collaboration on Mario Bava's THE WHIP AND THE BODY (La frusta e il corpo, 1963).

In my audio commentary for Kino Lorber's TALES OF TERROR, I began by telling the story of my first encounter with monster magazines and how the three faces of Price, Lorre and Rathbone in that film (painted by the great Basil Gogos) were arranged on the cover of FAMOUS MONSTERS OF FILMLAND #19, the first monster magazine I ever handled. Also in that short stack of issues was CASTLE OF FRANKENSTEIN #2, whose cover was a Robert Adragna painting of a handsome man with penetrating features seated at a desk in a densely book-lined study, illustratative of that issue's feature article "The Many Faces of Christopher Lee." So, on the same day I made the acquaintance of monster magazines and the stars of TALES OF TERROR, I made the acquaintance of Christopher Lee - a man whose multiple monster portrayals suggested him as Lon Chaney's heir to the title of the Man of a Thousand Faces. Little did I know at the time that Lee's personal acting idol had been Conrad Veidt, the star of the earliest famous horror film, Robert Weine's THE CABINET OF DR. CALIGARI (1919), but in hindsight no other actor comes close to being, as he was, the Conrad Veidt of our generation. In one towering package, he was dashing, debonair, villainous, cultured, athletic (he prized a belt buckle given to him by the members of the Stuntmen's Association for stunts that he performed himself on the set of AIRPORT '77) and - being fluent in at least five languages - truly cosmopolitan. I wouldn't be at all surprised if a good deal of my early exploration of European genre films wasn't in some large part due to Christopher Lee's participation in them. 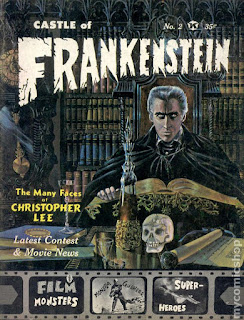 One of my favorite childhood memories is of attending the (for me) long-awaited 1964-65 reissue of THE CURSE OF FRANKENSTEIN and HORROR OF DRACULA with my cousin Cathy, who was visiting from out of town. I had not previously seen either of them, though THE REVENGE OF FRANKENSTEIN had become a television favorite and THE EVIL OF FRANKENSTEIN had played not too long before at my neighborhood theater; I was told they were her first horror films period. Both films had the reputation of being modern classics - Warren Publications had commemorated the double bill by issuing a fumetti magazine of both films, which I had already memorized - and they certainly lived up to their advance publicity. My grandmother told me the next morning that Cathy had evidently been disturbed by the experience - and I suppose she was, considering that she went on to teach a college course in Gothic literature.

I set out at first to be an artist, not a writer, so I initially expressed my appreciation for Christopher Lee in drawings. Looking back, there was a time of life when I spent a LOT of time drawing Christopher Lee - his face, his stature, his uniquely expressive hands, in different portrayals. This is his Rasputin, of course - one of my earliest surviving drawings, dating from 1972 when I was 15. I was by no means the only fan doing this. I can remember a somewhat earlier time, no later than 1967 or thereabouts, when my mother and stepfather took my little sister and I across town to visit some members of his family - we never met again, and I don't recall the exact nature of the relationship, but there was a boy there, slightly older than me, who had a stack of monster magazines and a bedroom wall covered with drawings that he had done of Christopher Lee. It was the damnedest thing I'd ever seen. 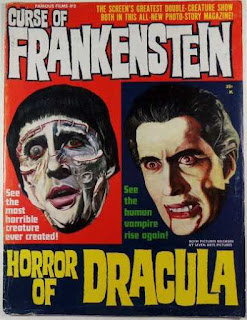 As much as I loved horror films as a kid, I felt myself moving away from them in the early 1970s. To my surprise, I was pulled back in by a preview screening of an unpromising-sounding Spanish picture called HORROR EXPRESS (1973) that co-starred Lee and his longtime partner Peter Cushing. I was prepared to be disappointed but something about the film reinvigorated by passion for the genre and I submitted my second review to CINEFANTASTIQUE, a couple of years after my first, which I had figured to be a one-shot. I haven't stopped writing about horror films since.

In the 25 years that VIDEO WATCHDOG has been extant, Christopher Lee was a good friend of the magazine and our extracurricular efforts. He provided an enthusiastic and welcome blurb for THE VIDEO WATCHDOG BOOK, promptly responded to my all of my questions with a personally-typed document of several pages when I was researching MARIO BAVA ALL THE COLORS OF THE DARK, and he was sent every issue we ever printed. When issues went astray, we heard about it! He even appeared in our Letterbox department, a department we first introduced with a drawing I had done of his familiar hand reaching out of a letter-lined coffin.

I must channel most of what I have to say about Christopher Lee as an artist, an icon and correspondent into the eulogy that demands to be written for our next issue. But I didn't want this day to pass without saying something in acknowledgement of how much he was loved.

In closing, a brief story: On the occasion of Peter Cushing's death, my late friend Bill Kelley called Christopher Lee (a personal friend whom he called "the Old Man") to express his condolences and commiserate. Bill expressed to Chris how moved he was to see how warmly and personally Cushing's fans were taking the loss of "St. Peter", which prompted Chris - who must have reflected on his own deep shyness, his formality around people he had newly met, and his own nervously talkative nature - to sigh with deep-seated certainty, "Well, they won't feel that way about me."

I thought of this often today as I was scrolling down my Facebook news feed and seeing so many outpourings of affection that proved the Old Man wrong. He was more loved than he knew. 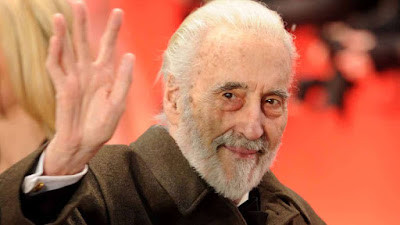