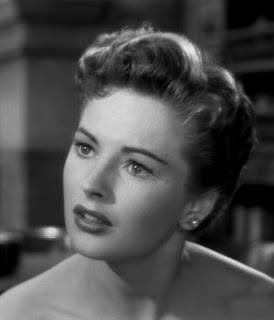 The beautiful, talented and ever stimulating Coleen Gray - one of my favorite actresses of the 1940's and '50s - has died at the age of 92, according to her good friend David Schecter. Best remembered for her roles in such films as NIGHTMARE ALLEY, RED RIVER, KANSAS CITY CONFIDENTIAL (pictured) and Stanley Kubrick's THE KILLING, she was also treasured by horror fans for her lead role in Universal's THE LEECH WOMAN, in which she played a middle aged woman who discovers an unpleasant means of retaining her youth and beauty. One might have suspected Ms. Gray herself of such untoward behavior, as she continued to look remarkably youthful and attractive well into her advanced years.