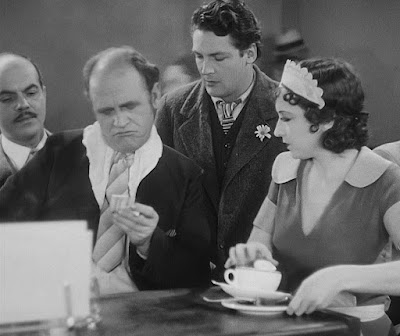 Last night, while making overdue acquaintance with F.W. Murnau's charming CITY GIRL (1930), I was surprised to notice a familiar face hovering in the background of the second café scene. As this centrally placed customer leaves his seat at the bar, waitress Kate (Mary Duncan) slips her new friend Lem (Charles Farrell, seen beside her) into that slot - to the annoyance of the mustached man in the background. That is actor Michael Mark, who would score a major speaking role in 1931's FRANKENSTEIN as the father of the tragically fated child, Maria. Though released in 1930, CITY GIRL was actually filmed in the latter part of 1928, so Mark had a few years between in which to ascend from extra to speaking parts. While at Universal, Mark would also appear in THE BLACK CAT (1934 version), SON OF FRANKENSTEIN, TOWER OF LONDON, HOUSE OF THE SEVEN GABLES, THE MUMMY'S HAND, FLASH GORDON CONQUERS THE UNIVERSE, THE GHOST OF FRANKENSTEIN, SHERLOCK HOLMES AND THE SECRET WEAPON and HOUSE OF FRANKENSTEIN (as "Herr Strauss"). During that time he also slipped away to MGM where he worked on MAD LOVE with Peter Lorre and to Columbia for THE BLACK ROOM with Boris Karloff. In later years, he ended up with bit parts in THE RETURN OF THE FLY, ATTACK OF THE PUPPET PEOPLE, and the movie with which the IMDb identifies him, Roger Corman's THE WASP WOMAN! Busy guy.

I thought I'd made an important catch but someone on the IMDb had already caught Mark's cameo, but it still hasn't been added to the site's official list of uncredited players.

Since they'll need to do that anyway, I believe I may have caught another one for them. During the scene when Lem returns to the café and bends over to peer through the window in search of Kate (who has, in fact, followed him to the train station and will soon end up in his arms), there is a cutaway to a group of pedestrians walking nearby, with some crossing the street. The man in the light-colored suit and hat caught my attention. There was something familiar about him, not just his face but his adroit, tightly-wound body language was familiar.

Then it struck me. This was the young Charles Lane. 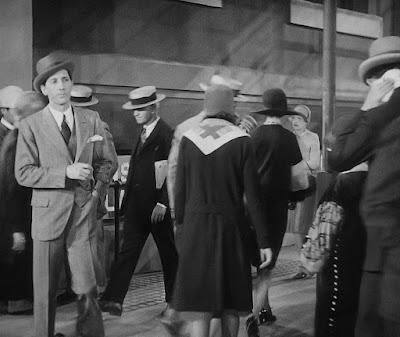 Charles Lane lived to be 102 and acted in more than 360 motion pictures, according to the IMDb. Anyone who loves movies and television has seen him countless times, usually as a snappy, tightly-wound, hectoring old man - a part he had evidently played for more than half his professional life. 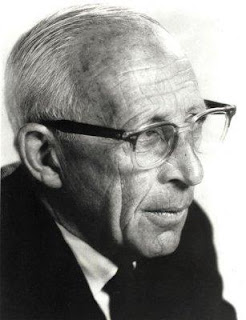 His earliest known roles, again re the IMDb, were in a spate of Warner Bros. pictures where he was uncredited, beginning with Alfred Green's SMART MONEY in 1931. In 1928, when CITY GIRL was made, he had a job with the Pasadena Playhouse, where he trained stage actors to work onscreen. 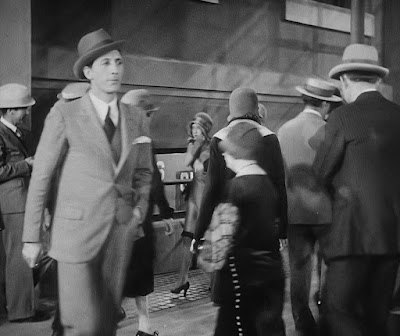 If this is Charles Lane - and I believe it is - this appearance would predate the earliest known screen work of America's most ubiquitous actor by several years, and inaugurate a screen acting career that bests even that of John Carradine by a couple dozen titles.


I've been receiving some requests of late for a complete list of the audio commentaries I've done for DVD and Blu-ray. I compiled such a list a couple of years ago, which appeared as a sidebar to an article I wrote about my commentary work for GOREZONE #29, but there have been quite a few more in the meantime. The list is presently up to 38 commentaries, but only 37 are listed here. I recently completed another for Kino Lorber, for a release that hasn't yet been announced.

NOTE
Some of my audio commentaries have appeared on other releases of these films in other countries. These releases may be properly licensed, but my commentaries were neither licensed from me nor compensated. Except for the BFI releases, which are exclusively licensed for a five-year period, my commentaries are available for licensing in other territories.
Posted by Tim Lucas at Sunday, September 06, 2015 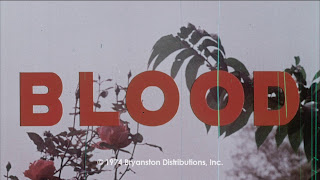 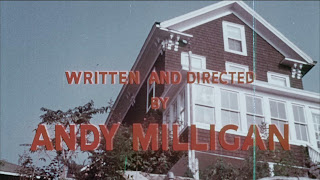 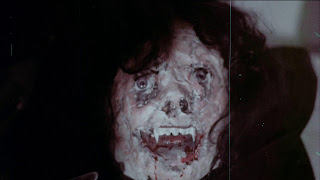 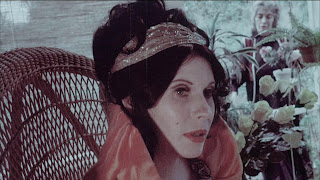 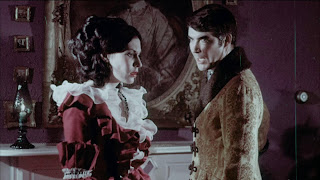 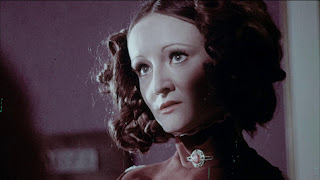 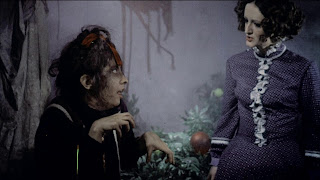 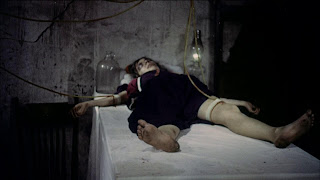 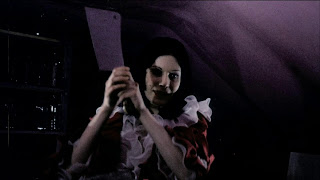 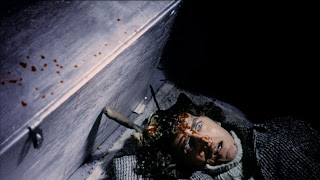 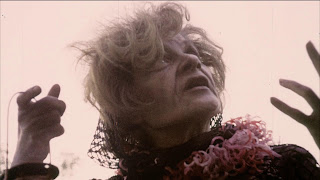 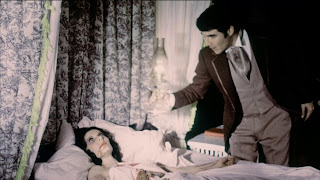 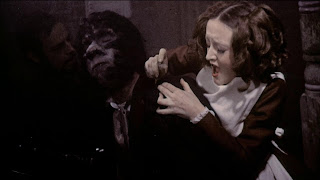 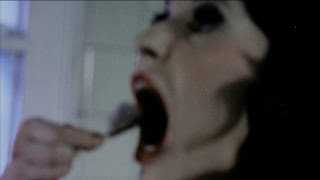 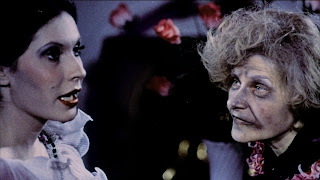 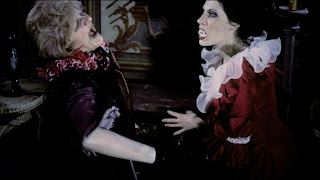 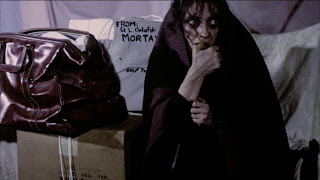 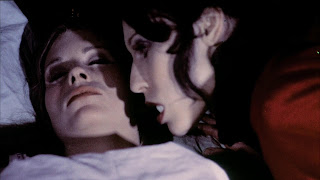 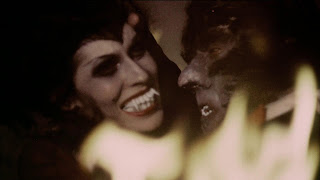 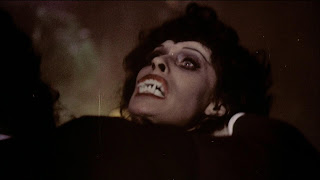 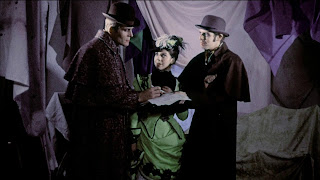 Sometimes a film comes along to make words seem almost superfluous, and if images alone could ever persuade someone to buy a Blu-ray disc unseen, wouldn't that film be... Andy Milligan's BLOOD?

Made in 1974, it was Milligan's first feature to be shot in 35mm at his place on Staten Island. As these frame grabs from Code Red Releasing's new limited edition BD attest, it is an absolutely hallucinatory shot of bargain basement Grand Guignol, made all the more irresistible by its dollops of soap. It's about the miserable arranged marriage of an incognito Lawrence Talbot (who has an understandably wandering eye) and Dracula's daughter (who is not only a vampire, but jealous, condescending and relentlessly needy). She's basically bedridden as Lawrence and a team of literally rotting, pustulent assistants use the blood of a halfwit donor to raise a crop of carnivorous plants with the capacity to wean the Countess from traditional forms of feeding. But is she appreciative? "Oh, go to Hell!" she tells her husband at bedtime. "We're there already," he says, rolling over - and that scenario is made riotously literal in the film's closing moments, as vampire and werewolf try their best to strangle each other in the midst of a raging inferno.

BLOOD is now available as the second half of a delightful Bryanston Double Bill from Code Red Releasing, a limited edition Blu-ray available from Screen Archive Entertainment and other outlets. Collectors should be advised that Code Red's print in nearly a full 10 minutes longer than the only other home video release, a VHS from Iver Film Services taken from a PAL master - but collectors will want to hang onto the earlier one too because it has bolder color and unmattes the framing to open aperture. The restored footage consists mostly of dialogue, but oh! what dialogue! Be aware that there is one unfortunate scene of mouse abuse, at least part of which appears to be faked - so let's pretend it all is.