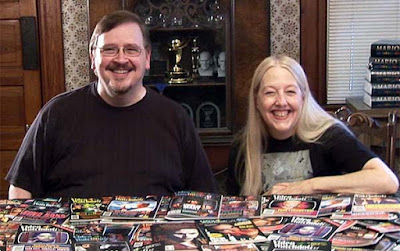 In case you haven't seen it yet, there's a new addition to our Website directory that reads "Become A Patron." We thought this blog might be the best place to go into some greater detail.

We know that our readers rely on our magazine, and we doubt it has escaped anyone's notice that - in the last couple of years - we've only been able to publish a couple of new issues annually, rather than the six promised by our bimonthly schedule. This has not been due to money problems or a shortage of material. The reason for the magazine's recent irregularity is largely due to the fact that we only have one Donna. It's one of her many jobs to produce VIDEO WATCHDOG on a regular schedule, but for the past two years, she has had to focus most of her attention on the creation and completion of the VIDEO WATCHDOG Digital Archive, the object of our successful 2013 Indiegogo campaign.

That process was fraught with untold technological perils, all very time-consuming - but happily, all that is behind us now. The promises of our campaign have now been fully kept: all 179 of our back issues are now digitized, as well as our two Special Editions, THE VIDEO WATCHDOG BOOK, and even MARIO BAVA - ALL THE COLORS OF THE DARK.

VW's digital arm is a colossal achievement, one that has attracted a lot of  attention and won the respect of executives from much larger businesses. What we did not expect when we undertook it is that the painstaking creation of the Digital Archive would take the wind out of our primary business - which is VIDEO WATCHDOG, the print magazine.

We have considered different things we might do to keep things moving forward, and have already implemented one or two. For the last 25 years, VIDEO WATCHDOG has operated largely on its own earnings. A couple of years ago, we decided to open our pages to paid advertising. In that time, we have done our best to reinvent ourselves as advertising-friendly, but pursuing advertisers is a full-time job; we've had to take heart in the support we have been able to attract on our own merits. Our most recent digital issue, VW 179, introduced a new advertising idea that we call the "Now Playing Showcase" - an inside front cover forum that would guarantee anyone with a product the undivided attention of our very select target demographic. Like a number of things we do, it seems to have been a little ahead of the curve. We hope that advertisers, artists, musicians and authors alike will discover this feature and the wonders it could work for them. But until then...

It also occurred to us that we might undertake another fund-raising campaign, but frankly, it would be counter-productive to take the time away from the magazine to mount such a thing. We know how much time and energy it takes to run a successful campaign, and the print magazine itself must be our primary concern.

We don't want to project the image of a small business seeking charity. What we are seeking is a reliable source of ongoing support, much like SIGHT AND SOUND has the support of the British Film Institute, or FILM COMMENT has the support of the Film Society at Lincoln Center. We can only envision this support coming from our readers, perhaps from those professionals who found their careers as a result of pursuing dreams that VIDEO WATCHDOG inspired.

And so we are seeking Patrons, serious investors in VIDEO WATCHDOG - a magazine that, over the past quarter century, has changed the way that horror and fantasy films are regarded by the industry. A magazine that innovated the way motion pictures on home video are reviewed by everyone. A magazine that has inspired a generation of readers to become filmmakers, screenwriters and preservationists. A magazine whose publishing successes include what many reviewers have described as the most beautiful film-related book of all time. A company that has received the Saturn Award for Special Achievement, the Independent Publishers Award, the International Horror Guild Award and that presently holds the all-time record number of Rondo Hatton Classic Horror Awards.

We are proud of these laurels, but it's not in our nature to rest on them. We are not ready to quit - there is still so much we want to achieve! The first thing we want to do is get back onto a regular schedule, to continue blazing the trail that we feel is our special contribution to genre journalism - a consumer magazine of genuine literary quality about the genre films that were ghettoized by audience and industry alike when we started publishing in 1990. Our Digital Archive - so much more than a mere digitizing of past content, with its myriad innovations and fresh models for accommodating advertising - shows that we still have bold and surprising ideas up our sleeves. There are also other books we want to publish, and we have many, many more issues that we want to produce. All this can happen if we can connect with those special people who share our dreams and seek only the reimbursement of seeing us achieve these goals.