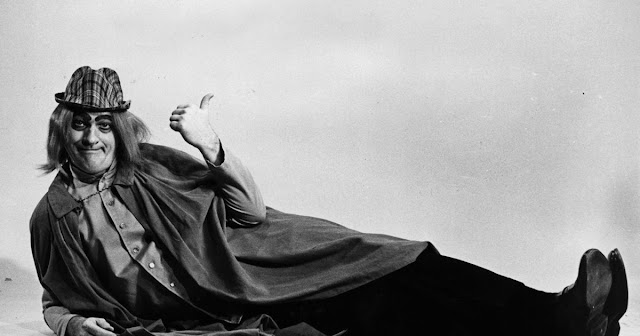 After reconstructing the listings for 12 TALL TALES, I've turned my attention to identifying all of the films that played on WXIX-TV's SCREAM-IN. The prime time Saturday night slot began running horror films as early as December 1968, but - to judge from local advertising - it didn't officially become SCREAM-IN until January 11. 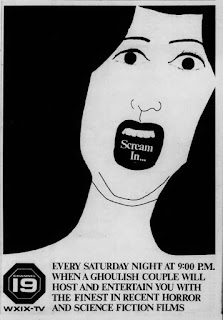 The titled show was reportedly launched with two hosts: 7+-foot-tall Bill Engesser (who had played the towering werewolf in the 1962 nudie HOUSE ON BARE MOUNTAIN) as "Mr. Whopper" and WXIX staffer Alice Davidson as his Morticia-like foil and companion. It's said that Engesser presented himself with no makeup, but merely bent over like a hunchback and contorted his face as he bantered with his co-star, the two of them addressing each other as "Bubala" and "Poopsie." Their stewardship did not last long - and I personally have no memory of it. Presumably the station realized this was not the way to go, as SCREAM-IN was subsequently revamped (pun intended) in May 1969, when local actor/announcer Dick Von Hoene (1940-2004) took over the reigns in the guise of Cincinnati's own legendary horror host, the Cool Ghoul. The Ghoul (pictured above), who feigned a Lugosi-like voice and a "bla-bla-blaaa" laugh, emerged from an upright casket at the beginning of each show, conducted conversations with an off-camera "friend" (also Von Hoene, doing a more Karloffian voice), and would pantomime to Halloween-themed records at the midpoint of each picture. Willie Mitchell's cover of the rhythm and blues standard "Slippin' and Slidin'" was the show's theme song.

I was only 12 when SCREAM-IN came along, and though it had been only two years since 12 TALL TALES had been cancelled over at WKRC-TV, it felt like eons since there had been any kind of horror movie package being shown on Cincinnati television. Of course, at 12, I was also hitting puberty and with puberty comes that heightened level of mania that made the Beatles possible. It was at that level I connected with SCREAM-IN and its syndicated movie packages from AIP-TV and Columbia. The Ghoul initially did the show live - I know, because a friend and I called the station as soon as his first broadcast ended and he kindly spoke to both of us (in character) for at least 10 minutes. We were his first fans, and we became his first fan club - not that we ever sought other members; there were just a few of us who would get together on Saturday nights to watch the show. Calling the station with post-mortem reports became a weekly ritual for a little while, and Dick (who started speaking to us in his real voice by the third call) seemed to enjoy hearing from us - so much that he actually gave me his home number when the show began videotaping his segments, a decision I'm sure that he later regretted. He invited me to the station one afternoon to meet him and watch him tape a show (I wish I could remember which film he showed that week), and some time later, another fan and I worked up some kind of make-shift award and presented it to him on the set. It was just a homely, framed piece of cardboard with a 12 year old's calligraphy on it, but he recognized our sincerity and had a station photographer come down to commemorate the moment - and then showed the photo on the air a week or two later. He was a very patient, very nice man, very knowledgeable about motion pictures (he introduced me to Stanley Kubrick, actually), and we kept in sporadic touch right up to the end. In the last years of his life, he was a regular customer at the bakery where my mother worked, and one day - as a gift from him - she presented me with that station photograph of me and my friend Jim, presenting the Ghoul with our award, which I had only seen once, briefly, on television about 30 years earlier and never, ever expected to see again. 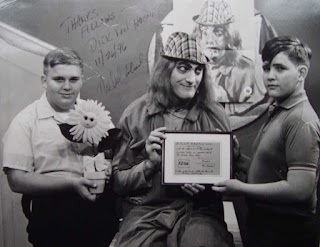 But besides the Ghoul himself, SCREAM-IN was like my most important education in horror movies in the years prior to my becoming a writer. It offered me my first serious, knowing exposure to Italian horror and, when WXIX came into possession of the Shock Theater package from Universal in the fall of 1970, it became my first (young) adult access to those films, as well.

WXIX-TV, Channel 19, was Cincinnati's fourth commercial television station and its first independent channel. It began broadcasting at 3:00pm on August 1, 1968. One of their most interesting early programs was a Sunday night film series called FOR ADULTS ONLY, a somewhat sensational title for a serious package of films including the likes of LORD OF THE FLIES, LA DOLCE VITA, ALPHAVILLE and numerous Ingmar Bergman titles. I hold Channel 19's early programming almost entirely to blame when I have to explain why my interest in horror and art films has always seemed to run neck and neck. Judging by the listings given in the CINCINNATI ENQUIRER archives, Channel 19 aired a handful of horror titles in the last month of 1968, at 9:00pm on Saturday night, but it did not become SCREAM-IN or hosted by the Cool Ghoul until January 11, 1969. Once the Ghoul stepped in as host, threeof those four early films were immediately reshown.

Here is the near-complete schedule of SCREAM-IN offerings, as best I have been able to reconstruct them.
1968
Dec 07 - THE ANGRY RED PLANET (or it may have been REPTILICUS, noted in another newspaper listing)
Dec 14 - THE BEAST OF MOROCCO (THE HAND OF NIGHT)
Dec 21 - CRY OF THE BEWITCHED (probably an incorrect listing, as the film is listed as playing in the same time slot on the following January 4)
Dec 28 - THE TERROR


1969
Jan 04 - CRY OF THE BEWITCHED
Jan 11 - THE ANGRY RED PLANET (first proper SCREAM-IN broadcast)
Jan 18 - THE BEAST OF MOROCCO
Jan 25 - JOURNEY TO THE SEVENTH PLANET
Feb 01 - THE TIME TRAVELERS
Feb 08 - NIGHT STAR, GODDESS OF ELECTRA (WAR OF THE ZOMBIES)
Feb 15 - IN THE YEAR 2889 (this listing was apparently in error, as it was repeated in the following week's listings; this week's broadcast was likely another Larry Buchanan film like ZONTAR THE THING FROM VENUS, also known to be in the AIP-TV package being shown through Aug 30)
Feb 22 - IN THE YEAR 2889
Mar 01 - MASTER OF THE WORLD
Mar 08 - PYRO
Mar 15 - MASTER OF THE WORLD
Mar 22 - GHIDRAH, THE THREE-HEADED MONSTER
Mar 29 - INVASION
Apr 05 - THE WIZARD OF MARS
Apr 12 - THE INVISIBLE CREATURE
Apr 19 - DESTINATION INNER SPACE
Apr 26 - IT CAME FROM BENEATH THE SEA
May 03 - THE SON OF DR JEKYLL
May 10 - TERROR IN THE CRYPT (first Cool Ghoul broadcast)

The unlisted titles shown during the preceding period would have included such titles as THE MUMMY'S HAND, THE MUMMY'S CURSE, HOUSE OF FRANKENSTEIN, NIGHT MONSTER, CALLING DR DEATH, NIGHT KEY, THE MYSTERY OF MARIE ROGET, THE CAT CREEPS, and SON OF FRANKENSTEIN from the Universal "Shock Theatre" package; BLACK SUNDAY, BURN WITCH BURN!, CIRCUS OF HORRORS (shown uncut only once), THE BRAIN THAT WOULDN'T DIE (likewise), THE GHOST OF DRAGSTRIP HOLLOW, STRANGLER OF THE TOWER, PLANETS AGAINST US, THE FLYING SAUCER from the AIP-TV package; THE MAN WHO TURNED TO STONE, THE CURSE OF DRACULA, IT CAME FROM BENEATH THE SEA and 20 MILLION MILES TO EARTH from the Columbia package, among other titles known to have aired on SCREAM-IN. I also recall seeing Del Tenney's THE HORROR OF PARTY BEACH and THE CURSE OF THE LIVING CORPSE on the show at some point.

By August 1970, the Cool Ghoul's popularity was such that WXIX expanded Von Hoene's duties to encompass Saturday night prime time from 7:00 - 11:00pm. This was done with the introduction of a 7:00 movie, initially called SHOCK IT TO ME but later changed to CREATURE FEATURE, which also happened to be the name of a Sunday afternoon broadcast that ran from 5:00-7:00pm. The Cool Ghoul did not host SHOCK IT TO ME/CREATURE FEATURE, but Von Hoene did "host" the program as an announcer, using the Karloffian voice he created for the Ghoul's off-screen companion, whom he always addressed as "my friend."

Aug 08 - DEATH ROBOTS / THE ABOMINABLE SNOWMAN OF THE HIMALAYAS (evidently incorrect, as this SCREAM-IN listing was repeated the following week)
Aug 15 - UNEARTHLY STRANGER / THE ABOMINABLE SNOWMAN OF THE
HIMALAYAS
Aug 22 - RETURN OF THE FLY / BEHIND THE MASK
Aug 29 - JOURNEY TO THE SEVENTH PLANET / SON OF DR JEKYLL
Sep 05 - THE APE WOMAN (cancelled at the last minute as Von Hoene considered the film too "sleazy" for young audiences, replaced with the non-horror WC Fields feature YOU CAN'T CHEAT AN HONEST MAN!)/ THE PHANTOM OF THE OPERA (1943)
Sep 12 - BEYOND THE TIME BARRIER / MY SON THE VAMPIRE
Sep 19 - THE BRAIN THAT WOULDN'T DIE (shown uncut for the first and only time!) / HOUSE OF DRACULA
Sep 26 - KONGA / HORROR OF DRACULA
Oct 03 - THE EYE CREATURES (single feature)
Oct 10 - CREATURE WITH THE ATOMIC BRAIN / THE GIANT GILA MONSTER
Oct 17 - DAY THE EARTH STOOD STILL / THE TERROR
Oct 24 - INVASION EARTH 2150 AD / PYRO
Oct 31 - GODZILLA VS THE SEA MONSTER / HOUSE OF HORRORS
Nov 07 - THE DEMON PLANET (PLANET OF THE VAMPIRES) / JESSE JAMES MEETS FRANKENSTEIN'S DAUGHTER
Nov 14 - ATTACK OF THE MUSHROOM PEOPLE / RETURN FROM THE PAST (DR TERROR'S GALLERY OF HORRORS)
Nov 21 - THE TIME TRAVELERS / HORRORS OF THE BLACK MUSEUM
Nov 28 - PLANET OF BLOOD (incorrect, relisted the following week) / Unlisted
Dec 05 - PLANET OF BLOOD (QUEEN OF BLOOD) / Unlisted
Dec 12 - Unlisted
Dec 19 - Unlisted
Dec 26 - Unlisted

One of the unlisted films from the preceding period would have been HORROR CASTLE (1963) with Christopher Lee, which received complaints from some viewers at the time of its first broadcast about a scene in which a rat cage was attached to a woman's face, resulting in half of her nose being eaten by the hungry rodent. Thereafter, Von Hoene became more sensitive to the needs of the younger members of his audience and he screened each film personally prior to broadcast and cut any scenes that he felt might be too sleazy or too violent for his following. (THE BRAIN THAT WOULDN'T DIE, CIRCUS OF HORRORS and THE FLESH EATERS are a few films found guilty on both counts.) In the opening minutes of his June 5 broadcast of Mario Bava's BLACK SUNDAY, he announced that part of the beginning of the movie would be slightly cut, so as not to upset the "little ones," but that the scene would be shown uncut at the end of the broadcast, when the little ones would be asleep, so that those who could take it could see it.

The next year began with a showing of BURN, WITCH, BURN! (UK: NIGHT OF THE EAGLE), a British film starring American actress Janet Blair, with whom Von Hoene was evidently very taken. Every time he presented the film - he had shown it at least once before this - he would touchingly alert his viewers to "pay close attention" to the leading lady in the movie "because she is very, very pretty."

The September 2 broadcast reportedly marked the final appearance by the Cool Ghoul, who closed out as he opened - by presenting TERROR IN THE CRYPT! WXIX would continue to run horror films in the Saturday night slot through Halloween, replacing the CREATURE FEATURE intro with episodes of the classic Boris Karloff series THRILLER. The remaining unhosted horror films in this time slot were:

Dick Von Hoene left WXIX at the end of October 1972 and subsequently took a job as a news announcer at radio station WUBE-AM. The Cool Ghoul continued to make personal appearances in the greater Cincinnati area.

My thanks to Craig Boldman, Steven Thompson, Joe Busam and Tom Holtkamp for their additional research.