I finally freed myself from the bonds of cable television some months ago, but thanks to Hulu and my trusty Apple TV, I've been able to keep tabs on the latest adventure of the Soska Sisters, HELLEVATOR. It airs on GSN: the Game Show Network, Wednesday nights at 8:00pm eastern. The third episode of eight airs tonight.

When I first heard about this program, I was excited that someone had recognized Jen and Sylvia Soska as personalities and had understood how well their darkly giddy, sweet-and-salty personalities could lend themselves well to a scary game show project. The premise is fairly irresistible in itself: the Soskas imperiously preside over a control room that operates an elevator that delivers three terrified contestants to three different levels, where they must individually conquer that level's unique challenges for a $5,000 cash prize. Thus, they stand to gain up to $15,000 before the final challenges posed by the final level, called The Labyrinth, where they must find as much additional money as they can retrieve from a series of gooey death traps, which - if they conquer them - brings them up to $20,000 and whatever additional monies they have plucked from the rusty jaws of an ancient embalming room or delousing pit.

Two episodes - "The Mortuary" and "The Asylum" - have aired thus far, and I've found them to be fairly entertaining, but there remains room for improvement. The most entertaining facet, surprisingly, has been the contestants. They are so hilarious, so completely over-the-top in their apparent complete belief in the Soskas' proposed scenarios of deranged coroners and madhouse nurses, that the viewer can't help but wonder if these people are real, off-the-street contestants or actors hired to sell the spooky vignettes. (Either way, it's entertainment, right?) Christian, the self-styled group leader of the second episode, immediately reveals himself as a whimpering ninny who "can't do hospitals" - prompting Jen's deadpan line, "Christian, this whole place is a hospital." His quivering, shivering, nearly pants-peeing performance is particularly funny, and lends itself unexpectedly to a feminist high-five finale.

The beauty of the show is how well it captures the purity of those trusting souls who are completely sucked into scary tales told around a campfire in the dark. At the beginning of each show, as the Soskas trade lines, spelling out the instant myth of some vintage sicko who briefly ruled over their own private world of gruesome anatomical and sickly psychological transgressions, we are treated to the most unlikely, wide-eyed expressions blossoming on supposedly adult (well, young adult) faces... and, speaking as a storyteller myself, it's irresistably charming. It also brings something back to the horror genre that has been lost in recent years - the vicarious pleasure of watching a trio absolute fools attempting to survive a night in a haunted house. In terms of the scares it serves up, HELLEVATOR is closer to the SAW films than, say, THE GHOST AND MR CHICKEN, but it forges a genuine connection between the two that simply did not exist before. 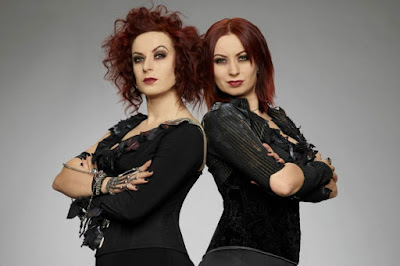 However, I think the producers of the show are selling their hostesses short. While HELLEVATOR shows a very real (or at least seemingly real) connection between the contestants and their chain-rattling challenges - which, on last week's show, included a young lady with her head locked inside an acrylic box that was being slowly filled with live (and very tame) rats as she had to navigate a ceiling grid to the key that would free her - there is absolutely no sense of contact or connection between the contestants and the two baleful ladies controlling their fates. Whether it's true or not, it consistently looks like the Soskas and the contestants were never on-set at the same time. Do the contestants even know who their hosts are? Also, Jen and Sylvia (whose names are never mentioned, whose screen credits are buried in the end titles under the names of the producers) don't seem to be playing themselves, but rather something closer to the svelte, black-dressed daughters of HELLRAISER's Pinhead. As you can see in the above photo, they have been made up in such a way as to look dour and slightly unnatural, accentuating an unconvincing contrast between them, rather than the natural symmetry that makes the Twisted Twins so appealing. While they do occasionally come up with a laugh-out-loud line (like "We don't have all day" in the premiere episode), they seem under directorial duress to speak and react with only the coldest pleasure. Stoic sarcasm is the best we get from them, which is a far cry from the infectious sense of fun which has always been the most compelling thing about them. I can't help feeling that HELLEVATOR would be so much better if they were allowed to be themselves, but there is a sense that the controlling minds behind this show were convinced that Horror is a dish best served grim.

For those of you who use Twitter, the Twins are known to tweet live along with the first broadcast of each episode, which is bound to add something vital to the experience.

I imagine that the first season of eight episodes will continue to adhere to this somewhat imperfect pattern, but even so, HELLEVATOR is worth a look - as a modern-day SPOOKS RUN WILD, if you like - not to mention an idea worth nurturing and developing further.