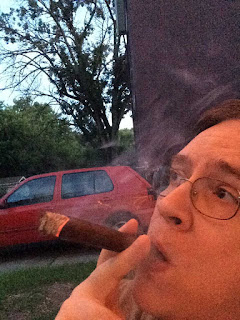 2015 was a difficult year for Donna and me, but I'm glad to say we survived it. I shouldn't accentuate the negative because the year was not without its highlights, its pleasures or its blessings. Top of the list would be that afternoon at the HorrorHound convention last March when I got more hugs from the Soska Sisters than I could count!

This was also a big year for personal accomplishments - I wrote the longest chapter for Neil Snowdon's WE ARE THE MARTIANS: THE LEGACY OF NIGEL KNEALE (a book still forthcoming), about the screenwriter's neglected literary career, I also wrote some entries for Marcelline Block's French film encyclopedia (still in the works); I was invited to join the Board of Directors behind Huston Huddleston's Hollywood Horror Museum project; and the record shows that I provided nine (9!) different audio commentaries for different Blu-ray releases this year, with another four (4!) still awaiting release - five, if you acknowledge that VALENTINO is coming out from two different companies on either side of the Atlantic. So this was an extremely busy year for me, though my time was ultimately more addressed to side projects than than to what is mine - which is, frankly, something I need to change. Mind you, I still managed to do all that we were able to do with VIDEO WATCHDOG, and the issues we produced this year - if anything - continued to exceed our usual high standards. I wrote nearly 60 new entries for this blog.


On a more personal note, Donna and I had to bid a sad farewell to our beloved Blabber (aka Mr Blab), who succumbed to renal failure at the ripe old age of 18 - and then, in one of those blessings I mentioned, Janie came to live with us, sitting on my chest and tummy every day to be adored and always taking her leave with such sudden, unpredictable force that I now carry a red, haphazard tic-tac-toe grid on my abdomen.

Next year is already looking better and giving rise to certain hopes, but I can't talk about that yet. My resolution for 2016 is to try to better address my own projects, my own needs, my own life, and my own health. Happy New Year to all of you who have followed this blog over the past 10 years! Celebrate responsibly this evening, and stay tuned.
Posted by Tim Lucas at Thursday, December 31, 2015