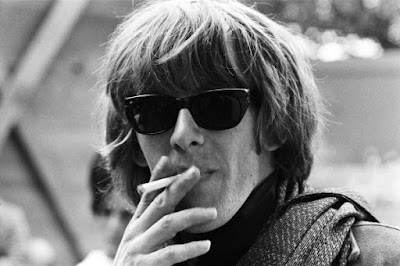 The story goes that Cincinnati-born Martyn Buchwald, sporting the name Marty Balin as he closed out his days as a member of the Bay Area folk combo The Town Criers, began to spot members for his next band - not on chops, but on looks. As in, "You look like a drummer; I want you to be in my band" - which is how guitarist Alexander "Skip Spence (later of Moby Grape) ended up playing the drums on the first Jefferson Airplane album. Marty found his second-in-command during an open mike night at a local club when a shaggy, bifocaled folkie in a cap ambled onstage, tuned for an eternity, looked out at the conversing crowd and said "I'm sorry, I can't do this." That overachiever turned out to be Paul Lorin Kantner, who went from this inauspicious moment to confirm Balin's instincts, by becoming his chief songwriting partner, 12-string rhythm guitarist, and ultimately the visionary responsible for determining the group's overall sound and identity. It was Paul, for instance, inspired by the example of Ronnie Gilbert of The Weavers, who determined that this group of theirs needed the egalitarian touch of a woman's voice. The first woman to sing with Jefferson Airplane was Signe Toly Anderson, who, some 50 years later, would die on the same day as Paul - January 28, 2016 - at the same age of 74. Underscoring the curiosities of the flow of time are the facts that these two Jeffersonian deaths took place on the same calendar date as that of the group's namesake, Thomas Jefferson, and that Jefferson Airplane itself officially disbanded in 19... 74. Well, it didn't so much disband as metamorphose into Paul's next stage of the band, Jefferson Starship. And it was in that same year that the last (pre-1989 reunion) Jefferson Airplane album was released, EARLY FLIGHT, which featured the belated release of a previously unissued track by the Signe-fronted band, Judy Henske's "High Flying Bird," which finds Paul and Signe harmonizing on the chorus, "I've got the sit down, can't cry, oh-Lord-I'm-gonna-die blues."

The beautiful symmetry of it all complements that of David Bowie's recent death, but that's not where the parallels end. Kantner, like Bowie, was rock music's original science fiction buff. A long-time buff of writers like Heinlein, Sturgeon and John Wyndham, Kantner saw the burgeoning otherness of his generation in the 1960s as akin to the rise of the Midwich Cuckoos in Wyndham's novel of that same name, better known by the title of the films based on it, VILLAGE OF THE DAMNED. Kantner had been audacious on record from the get-go, with a few of his compositions and co-compositions for the first album, JEFFERSON AIRPLANE TAKES OFF, being singled out for RCA label censorship. "Let Me In" was a tense monologue directed to a tease who ultimately offered to open up in exchange for money, while "Run Around" painted a somewhat psychedelic picture of public fornication in a park. Both songs had to be rerecorded when the original pressing was temporarily pulled off the market. There was not too much to argue about with the second album, SURREALISTIC PILLOW, which introduced The Great Society's Grace Slick as the Airplane's new female singer; they willingly edited the line "but in bed, baby, I'm afraid you don't know where it is" to "but inside your head, I'm afraid you don't know where it is" to engage with the Top 40 - and continued to sing the line as written in live performance whenever the mood struck. It was with the third album, the joyously experimental AFTER BATHING AT BAXTERS, that Kantner seemed to take directional charge of the band - as he told his record label, who were uncertain of a new album with so little Grace Slick on it, "We've had our hits, and now our audience will take whatever we give them." He knew then what it took Hollywood film directors another 20-30 years to find out, that it's precisely in the shadow of a huge success that one should experiment, when an audience is guaranteed.

BAXTERS opens with a sustained barrage of psychedelic feedback that represents a kind of bomb going off, triggering mutations - as indeed had happened, figuratively, as folk and rock became folk-rock. Kantner conceived of a mutant character named Pooneil, composed of equal parts his childhood hero Winnie the Pooh and his adult hero Fred Neil, and wove an extended song around both their influences, freely quoting from A.A. Milne in "the folk tradition" put forth by folk artists like Neil. The album ended with a surprising anthem for what Kantner estimated to be "about two weeks in time when things were perfect", which Madison Avenue extended into an entire "Summer of Love." "Won't You Try/Saturday Afternoon" was, much like the opening "The Ballad of You and Me and Pooneil", a mind-boggling suite of shifting time-signatures that achieved a seemingly effortless balance, and the lyrics were largely taken - again, in "the folk tradition" - from an account of the first San Francisco Be-In written for THE SAN FRANCISCO CHRONICLE by their resident critic (and an early champion of Jefferson Airplane), Ralph J. Gleason. 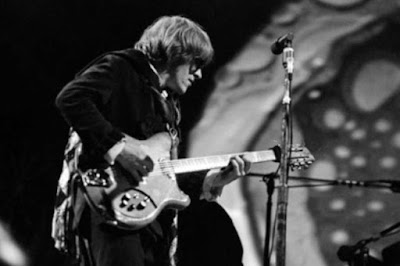 The next album CROWN OF CREATION, released in 1968, reflected its times by showing how sternly divisive they were, relegating all the ballads to Side One and the more upbeat numbers to Side Two, and the cover graphics made explicit the Wyndham mutation aspect of Kantner's concept of the Airplane by showing their blurring figures driven aloft by the fiery mushroom cloud at Hiroshima. The illustration of the Airplane as post-war generation was made explicit, as was the current war tensions of the time. The album ended with "The House at Pooneil Corners," a frankly terrifying inversion of "The Ballad"'s utopian introspections. Robert Kennedy dead, Nixon bound for the White House, the draft claiming the futures of countless young whether they died or survived Vietnam - it's all there in a song that shockingly prefigures the brand of "death of the universe" rock that King Crimson would make their own the following year. The Airplane's last great album, VOLUNTEERS, released in 1969, was an openly political response to highly charged political times, packaged to look like an underground newspaper with someone's lunch inside. The album included three of Kantner's greatest songs, "We Can Be Together", "Volunteers" (co-written with Balin) and "Wooden Ships" (co-written with David Crosby and Stephen Stills). The latter, also included with a different arrangement on the first CROSBY STILLS & NASH album, was the first of Kantner's escapist science-fiction scenarios - a field he would explore more definitively on his two "solo" albums (heavily buttressed with guest musician help), the Hugo Award-nominated BLOWS AGAINST THE EMPIRE and PLANET EARTH ROCK & ROLL ORCHESTRA.

I could go on in this vein, but this is just history and what I feel on the occasion of Paul Kantner's passing is powerfully personal. We probably all can admit to at least one, but Jefferson Airplane is the band, the band idea, the band alchemy that has most obsessed me, since I first discovered them in 1969. It was the experience of hearing VOLUNTEERS, at the age of 13, the first album I ever heard with six-minute songs, in a stereo image as deep and complex as it was wide, that weaned me permanently away from a Top 40 orientation - and when I first saw the Airplane in action, on a television special called GO RIDE THE MUSIC, the extreme difference of the studio version of "We Can Be Together" (primarily acoustic, with prominent guest piano by Nicky Hopkins) to the special's live-in-the-studio version (with Kantner playing his 12-string Rickenbacker electric with what I can only describe as courtly majesty) was so striking that I became a lifelong devotee of what were then called bootleg tapes. Over the decades, I've collected close to a couple hundred hours of live Airplane shows alone, and I am here to tell you that the original lineup - with Jorma Kaukonen on lead, Jack Casady on bass, and their brilliantly spontaneous jazz-forged drummer Spencer Dryden - never played a song the same way twice. As a live unit, they were highly unpredictable, explosive, galvanizing, sometimes coming very close to flying off in too many directions, and I have always found that aspect of their chemistry spellbinding. What underscores Paul Kantner's particular value to them is that, when you hear a Grace Slick composition on record, the band basically accompany her - and I would say the same is true of a Marty Balin or Jorma Kaukonen song. But Paul Kantner's songs somehow belong to all of the members; he understood their three-part harmonies, the particular dynamics of their instrumental interplay, and he composed songs that allowed them to shine as a single personality. My favorite example of this is "Alexander the Medium" from 1972's LONG JOHN SILVER album, a song that often brings tears of appreciation to my eyes; another is a song appropriate to this occasion, "Your Mind Has Left Your Body" from the Kantner/Slick/Freiberg album BARON VON TOLLBOOTH AND THE CHROME NUN - which captures the entire Airplane lineup as it then existed and adds some truly celestial Jerry Garcia steel guitar to the mix. 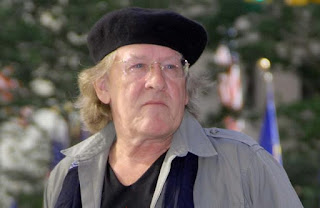 I met Paul Kantner once, backstage at the RKO Albee Theater (where I would meet Donna later in that same year of 1974), and spent about 15 minutes talking with him and Grace; I had heard stories about how difficult he could be, but they were both very kind and generous - in fact, Paul briefly disappeared and came back with some other people, asking me "You don't mind sharing, do you?" I smiled because - as Grace (the mother of his first child, China) had once noted in an interview - that whole childhood thing of being together and sharing was an important facet of who he was, in life and in song. I also saw him once more when he brought his Jefferson Starship to Cincinnati's Bogarts in 1993, with Jack Casady, Papa John Creach and Signe Anderson Ettlin in tow. Signe left the tour not long after, due to some health problem or other, and to be honest, she was not in good voice on that occasion, but I feel very fortunate to have seen them play together. I have a particularly vivid memory of Papa John's solo performances that night, especially a version of "Over the Rainbow" that he seemed to be personally addressing to Donna (it's one of her favorite songs), which Kantner watched while sitting in the wings, with an air of pride and nostalgia as he smoked cigarette after cigarette. We also exchanged a few emails over the years, and fired comments back and forth on one or another of the Jefferson Airplane newsgroups when we were both active there. In one of mine, I responded to a call for requests by proposing that the band try adding the Grateful Dead's "Dark Star" to the "Blows Against the Empire Suite" and I was honored when the next round of set lists showed that Paul had incorporated my suggestion.

He was a utopian dystopian, an anarchistic organizer, a curmudgeonly open heart, unwilling to take anybody's shit and a day early in dishing it out - and all these contradictions held court behind a strumming arm that played riffs as rallying as any in rock. I owe him a great debt, not only for a stack of albums that have guided me through a lifetime, but for helping to shape the person I've become - artistically, spiritually, and politically. And therein lies the power and the value of song. 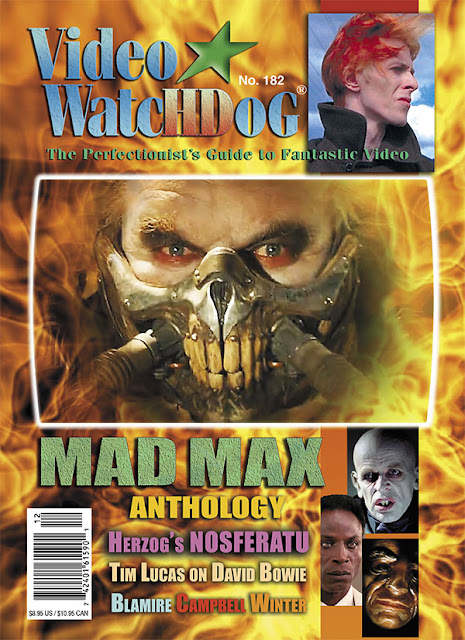 It flames its way to subscribers on February 15, and should arrive in bookstores by March 6. Available to preorder now. For a Free Preview of select contents, click here.
Posted by Tim Lucas at Monday, February 01, 2016