The Forbidden Fruits of the Fine Arts Plaza 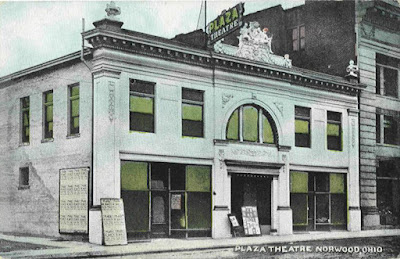 While exploring the archives of Cincinnati's daily newspaper, THE CINCINNATI ENQUIRER, a few days ago, I made an autobiographic discovery that put a chapter of my life - or, more specifically, the life of the world around me - into sharper focus.

When I was a child, my neighborhood movie theater was called The Plaza - some of you may remember that I dedicated the first issue of VIDEO WATCHDOG to that theater, with an inside back cover photo and a brief memoir. As I knew it, the Plaza differed from the photo above with the addition of an overhanging V-shaped marquee underpinned with orange-yellow light bulbs that reminded me of the bubbles in ginger ale. This was where I saw my first movie (THE INCREDIBLE SHRINKING MAN, at the age of three or four), where I attended my first movie unescorted (FRANKENSTEIN 1970, when I was probably six - as unimaginable as this might seem to parents today), and where I would experience a number of my biggest movie-going eurekas (most Hammer and Toho films, THE TRIP, ONCE UPON A TIME IN THE WEST, SPIRITS OF THE DEAD). I can still remember the gut punch of walking past the theater one day and seeing the words THIS PROPERTY IS CONDEMNED on the marquee, not realizing this was the name of the new attraction and fearing that this temple of dreams was about to meet the wrecker's ball.

However, in the midst of the years when it was my great privilege to gain my cinematic education at the Plaza, I can also recall a mysterious period when it became closed to me - a period that, it now seems, I didn't fully comprehend at the time. It's important to remember that my first independent movie-going years were in the early- to mid-1960s, so there was a lot of important stuff in the zeitgeist competing for my attention - not only weekend matinee tickets at the Plaza, but also the Silver Age of Marvel comics, MAD magazine, miscellaneous paperback books, and all the great music that were being played on WSAI Top 40 radio. Nevertheless, I have a clear memory of walking past the Plaza one day and discovering that it had changed. In memory, it seemed to me that it had been closed for awhile, but the newspaper ads do not support this. But something about the theater's exterior had changed, and as I peered through the windows on the familiar swinging doors, I saw that the lobby - formerly decked out with framed posters for the coming attractions - was now displaying framed works of art, and the concession stand area had been simplified to promote one thing: coffee. The admission prices listed above the cashier's box no longer included "35 cents - Children") because children plainly were no longer being admitted. The feature being shown that particular week, I remember, starred Brigitte Bardot.

So I had a recollection that, at some unidentified point in my childhood, the Plaza had become a smut palace. It certainly would have been in keeping with my neighborhood of Norwood, Ohio, at that time, where I obtained my reading material at the Ault Book Store, just up the street from the Plaza on Montgomery Road ("the pike," we called it), near the Elm Avenue intersection. "Ault" was just one letter shy of "adult" with good reason; it seemed to specialize in nudie and fetish publications and was always being raided and closed down for selling pornographic material. Whenever I went in, the lady behind the counter, who resembled (and may well be) this lady... 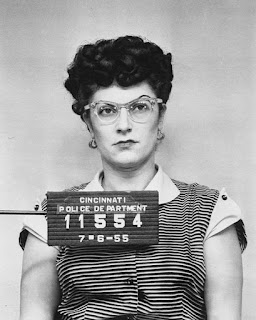 ... told me where the comics spinner racks were and to keep my eyes "straight ahead" until I reached them. You've got to wonder why they didn't keep the comics nearer the front door, but it wasn't my shop to design and this way of doing things worked wonders for my peripheral vision. What I am saying is that my childhood felt somehow surrounded by intimations of the forbidden, so I accepted matters a little too quickly when these fingered fogs of contamination and defilement seemed to seize hold of the Plaza. I remember getting to a point where I walked past the Plaza with my eyes "straight ahead," but with my young imagination riotous with daydreams of the kind of films that might be playing there.

But, as I say, the newspapers contest my memory - besides, I was only seven years old at this time, so what did I know?

Well, I apparently knew enough to know that the Plaza was bringing me ever closer to the Tim Lucas I would grow up to be when it played host to a couple of unforgettable matinee shows just before it metamorphosed into something else. On the weekend of November 29-December 1, as the rest of the world seemed to stand still in the wake of President Kennedy's assassination, I saw two pivotal films at the Plaza: Roger Corman's X - THE MAN WITH THE X-RAY EYES and Georges Franju's THE HORROR CHAMBER OF DR FAUSTUS, aka EYES WITHOUT A FACE. Last year, I recorded Blu-ray audio commentaries for both of them. 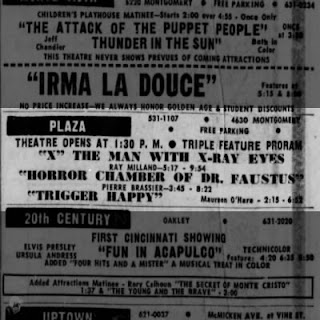 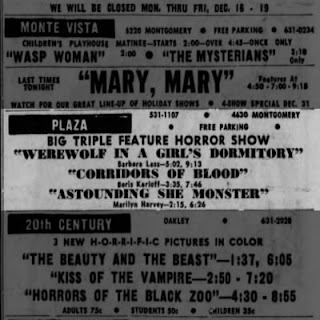 One week later, I saw the Fleischer cartoon feature GULLIVER'S TRAVELS there - my first exposure to rotoscoped animation. But on the following weekend of December 14-15, the Plaza hosted a "Big Triple Feature Horror Show" consisting of Paolo Heusch's WEREWOLF IN A GIRL'S DORMITORY (my first exposure to Italian horror), Robert Day's CORRIDORS OF BLOOD (my introduction, believe it or not, to Christopher Lee), and Ronnie Ashcroft's unforgettable THE ASTOUNDING SHE MONSTER. I have written at length about the latter picture's effect on me for VIDEO WATCHDOG, and the feeling I had as I gazed with prepubescent lust and shame at the film's one-sheet poster when it was briefly displayed in the theater lobby - probably during that GULLIVER'S TRAVELS engagement. I remember that day vividly, but what I did not remember was that this afternoon had marked the end of the road for the Plaza Theater, as I had known it since the first day I was exposed by projected film. 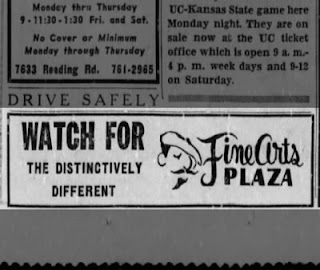 On December 18, THE ENQUIRER ran a small display ad in their movie section advising people to "WATCH FOR The Distinctively Different Fine Arts Plaza." The theater's logo was accompanied by a cartoon image of a beatnik, replete with beret and goatee - the sort of personage one never saw walking the sidewalks of Norwood, Ohio. This was followed on December 22 with a more informative vertical display ad announcing that the Fine Arts Plaza would open on Christmas Day with a 6:00 showing of THE COUNTERFEITERS OF PARIS (Le cave se rebiffe, 1961) starring Jean Gabin. In addition to the feature, live jazz would be presented on the theater stage and watercolors from a local artist would be exhibited in the lobby.

That's right - the smut house of my childhood memories has turned out to be an art house! I spent most of that day of discovery prowling through the ENQUIRER archives, discovering that the forbidden pleasures being offered by the only theater in my world (at that time) included such films as Fellini's LA DOLCE VITA and THE SWINDLE, Buñuel's VIRIDIANA (which was held over for a second week! in Norwood!), Antonioni's THE NIGHT (La notte), Dino Risi's LOVE AND LARCENY, Mario Camerini's RUN WITH THE DEVIL, Visconti's ROCCO AND HIS BROTHERS, the documentary MARILYN, Irving Rapper & Luciano Ricci's THE STORY OF JOSEPH AND HIS BRETHREN, Peter Brook's LORD OF THE FLIES, Elia Kazan's AMERICA AMERICA - and yes, Brigitte Bardot in Roger Vadim's PLEASE, NOT NOW!, which the theater hosted in mid-January 1964. On April 22, they were showing something identified in the ENQUIRER's theater showtimes listings as "THE LOVE MAKERS"; there was no accompanying ad, which leads me to suspect that it was Koreyoshi Kurahara's THE WARPED ONES (1960) playing under its Audubon Releasing title THE WEIRD LOVE MAKERS - a title the ENQUIRER would never have allowed. I was also fascinated to see that, in early June, the Fine Arts Plaza presented Marcel Camus' BLACK ORPHEUS - a highly rhythmic, percussive trailer for which I vividly remember seeing at the Plaza, which suggests to me that (at some point into the theater's reinvention of itself) the Fine Arts Plaza brought back weekend matinees geared to appease the neighborhood kids. Alas, these don't seem to have been advertised in the local papers. All these years, I've wondered why the Plaza had shown BLACK ORPHEUS without ever showing the picture; it somehow bypassed me completely that it played. I wonder if I could have talked my way in?

What I find so fascinating about this uncovered information is that I could not have been born farther outside the reach of Italian cinema, yet my neighborhood theater - a place that better gauged the local tastes with showings of THUNDER ROAD, HOOTENANNY HOOT and KISSIN' COUSINS - took a brief page in time to present to the natives the works of Fellini, Antonioni, Visconti, Risi, Camerini... during which time I absorbed it passively, as a child with acute intuitions will do with forbidden fruit. Each time I walked past my former home away from home, feeling shunned by its Adults Only policy, did I determine in the depths of my DNA to grow into the kind of adult who would be accepted there, belong there? 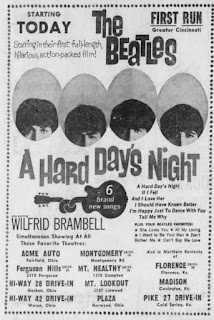 As best I can determine from the ads I found, the kindred spirits who ran the Fine Arts Plaza came to the inevitable conclusion that they had erected their beatnik arts mecca in the wrong spot by mid-summer. When August 12 rolled around, the Plaza reverted to its original name and family-friendly policy to present a first-run showing of Richard Lester's A HARD DAY'S NIGHT. I was there, with my pregnant mother and a bunch of teenage girls, for the first screening and the place went crazy each and every time a Beatle spoke - or, indeed, any time Paul McCartney appeared onscreen.

Sometime in 1964, we moved from one Norwood school district that was quite near the Plaza to West Norwood, which was more of a walk. That said, it was a walk I took frequently, and had to take frequently because the Plaza became less diligent about its newspaper advertising, forcing me to walk to the theater, admission money tight in fist, at least until its marquee came into readable view. If it wasn't horror, science fiction, rock 'n' roll or Jerry Lewis, I would sometimes turn around and head back to the Puls Pharmacy, where I could put that money toward a malted milk or a few comic books. There was a year to come when we lived outside Norwood for a year, and I remember saying goodbye to the Plaza was the hardest thing about that separation - my mother could never settle anywhere for long, so I knew better than to make friends from whom I'd sooner or later have to part. There were also periods, following our return, when the Plaza closed and reopened for mysterious reasons. By 1968, my allowance had risen to the point where I worked up the courage to ask the managers if I might buy the poster for a certain film once it had finished its engagement. I didn't get an immediate yes, but I persisted until I bought the poster for Hammer's THE LOST CONTINENT for all of 75 cents. I'm glad to say I still have it, and a couple of others, which I held onto as an enduring, tangible connection between myself and this long-gone place that somehow presented me with the landscape, if not the meaning, of my life.